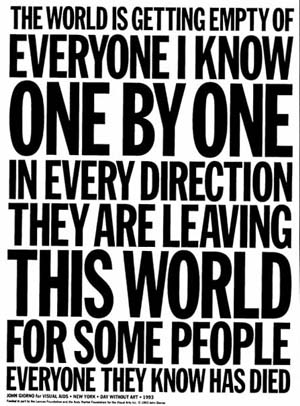 Visual AIDS began Day With(out) Art on December 1st, 1989 as a national day of action and mourning in response to the AIDS crisis. It was meant to inspire positive action and make the public aware that AIDS can affect everyone.  That first year some 800 U.S. art and AIDS groups participated by shutting down museums, sending staff to volunteer at AIDS services, or sponsoring special exhibitions of work about AIDS. Since then, Day With(out) Art has grown into a collaborative project in which an estimated 8,000 national and international museums, galleries, art centers, AIDS Service Organizations, libraries, high schools and colleges take part. 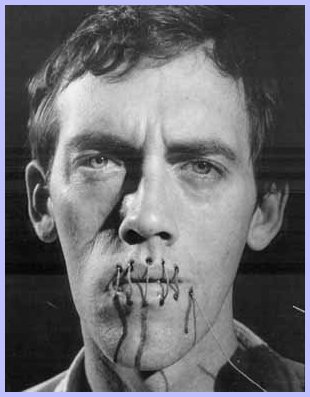 David Wojnarowicz who died of AIDS related complications in 1992.

In 1997 Day Without Art become a Day With Art in order to recognize and promote positive programming and events meant to draw attention to the continuing pandemic. Though “the name was retained as a metaphor for the chilling possibility of a future day without art or artists”, they added parentheses to the program title, Day With(out) Art, “to highlight the proactive programming of art projects by artists living with HIV/AIDS, and art about AIDS, that were taking place around the world” because they felt that active interventions, such as this year’s film screening, within the annual program of arts organizations was more effective now than actions that would shut down the arts.

This Thursday, December 1, there will be free screenings of a film by Jim Hodges, Encke King, and Carlos Marques da Cruz scheduled in dozens of venues throughout the country including Texas. Untitled, a 60-minute film, begins by reflecting on the early AIDS epidemic then “eschews a linear narrative to introduce a fractious timeline, moving from the sublime to the tragic and back again. By juxtaposing mainstream network news, activist footage, artists’ works, and popular entertainment from the last turbulent decades, Untitled references regimes of power that precipitated a generation of AIDS and queer activism and continues today with international struggles for freedom and expression”.  Apparently Artpace had invited their alumni Hodges to give a lecture on Felix Gonzalez-Torres: Billboards and in response, he teamed up with filmmakers Marques da Cruz and King. Untitled debuted in their Hudson (Show)Room on May 1, 2010. This year Artpace will show the film again as well as feature an AIDS awareness banner designed by the late San Antonio artist Chuck Ramirez (1962-2010), who was HIV positive. 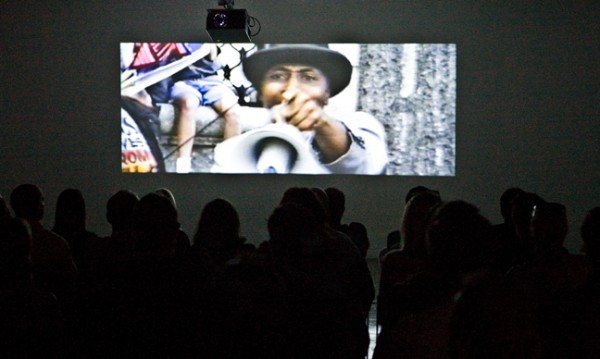 Untitled debut at Artpace on May 1, 2010. Photo credit: Justin Parr

Most of these screenings focus on the film but Creative Time is also hosting a discussion at the IFC Center in New York moderated by Chief Curator Nato Thompson, artist Malik Gaines and writer and filmmaker Shanti Avirgan. They will address questions such as “How do we weave the long and critical history of AIDS activism into the movement today? How can we understand critical and cultural interventions like Untitled and Day With(out)Art in context of Occupy actions? How can we integrate these analysis, and others, into the important goal of identifying a politics of impoverishment?”  They ask that the audience come prepared to join the dialogue.

Watch the trailer here then see Untitled, which is free and open to the public at the spaces below:

Austin: AMOA – Arthouse at the Jones Center  Screening at 7:00 PM

[…] can also read a little more on Day With(out) Art on Glasstire here.) Tweet This […]