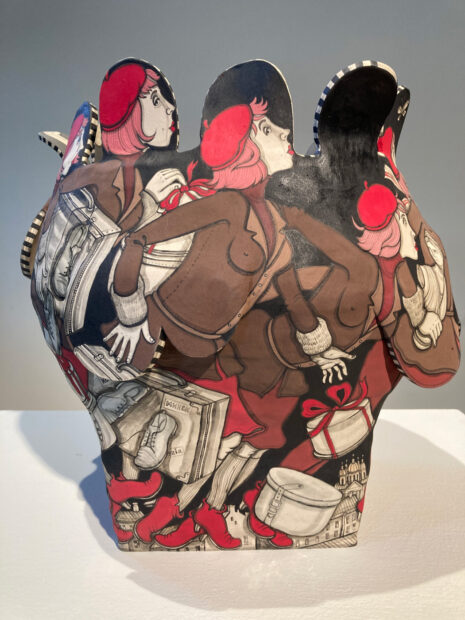 A ceramic work by Yana Payusova, on view at Conduit Gallery. 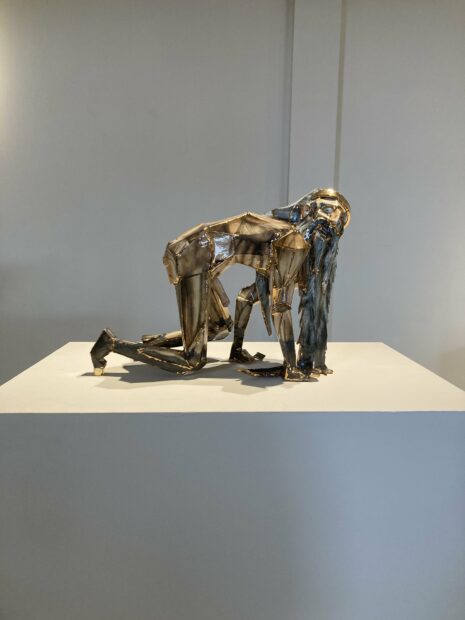 A ceramic work by Nick Lenker, on view at Conduit Gallery.

This grouping of ceramics was “Kind of an experiment,” says gallery director Danette Dufilho.

Conduit Associate Gallerist Carron Batt visited the University of Texas at Arlington’s (UTA) September exhibition, Reminiscing the Now: Directions in Contemporary Clay, and liked what she saw. UTA art professors Yana Payusova and Nicholas Wood co-curated the show of 15 ceramic artists from across the United States; they also both work extensively with the material. A byproduct of the show, just a few short months later, is Conduit’s own musing on contemporary clay practices. This time, Payusova has gone from curator to curated, alongside selected artists she picked for Reminiscing the Now: Jennifer Ling Datchuk, April Felipe, and Nick Lenker.

In January of this year, Conduit showed Payusova’s totemic painted ceramics in their project space. Her uncanny ability to imbue painting into the surface of ceramic works was enthralling then, as it is now. In Clay Bodies, Payusova shows a piece from her Revolutions series, in which she paints the figure of one woman in sequence. The sensation of walking around the medium-sized urn and seeing the figure struggle to carry many items is reminiscent of Muybridge’s movement studies.

Jennifer Ling Datchuk and Nick Lenker both show interesting applications in material transfer for ceramics: Datchuk uses specialty Chinese transfer paper, as seen in the willow ware detail of her “Basic Bitch” knuckle adornments. Lenker works with a kind of decal method to introduce intricate motifs on his polygonal vessels.

Though smaller than UTA’s September showing of these artists, it is an excellent representation of the advancements made in ceramic arts, near and far. 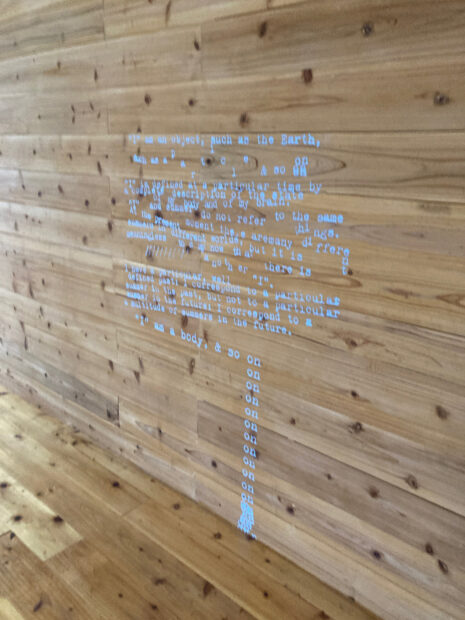 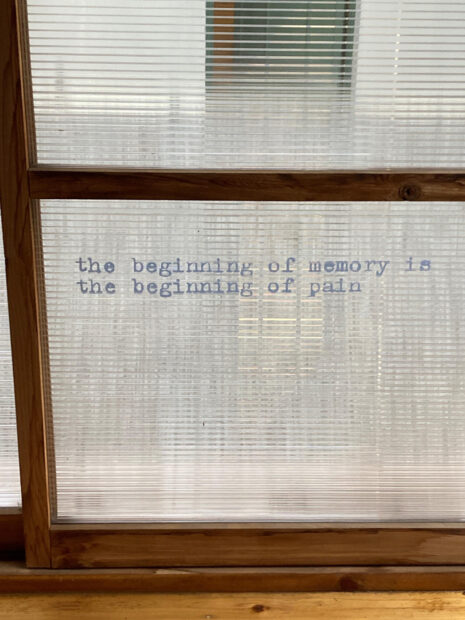 “You have to take off your shoes,” gallery attendant Greg Meza tells me during Saturday open hours. There is a reverence to this solar house, built by Greg Ruppe in the immaculately landscaped yard that circumnavigates The Power Station, an art space near Dallas’ Fair Park. The doors are paneled with clear, lenticular sheets that occlude what is inside. For this exhibition, Summer E. Aquino has presented their collection for Borgen Wolfe, Jesse Morgan Barnett’s publication project. For Borgen Wolfe’s programming, Barnett invites artists to produce a work of art in the medium of cut vinyl, which is then purchasable in an online storefront.

The exhibition feels like mathematical theorems about love. The spatial play of the lettering indicates there is a movement that Aquino wants us to follow with the work. Some of it seems in reference to orbitals found in astronomy or physics. Most of the pieces have a sequential quality that prevents the word jumble from becoming a salad of illegibility, but there is an unease in how one must strain to read them. There is definitely order in the chaos. 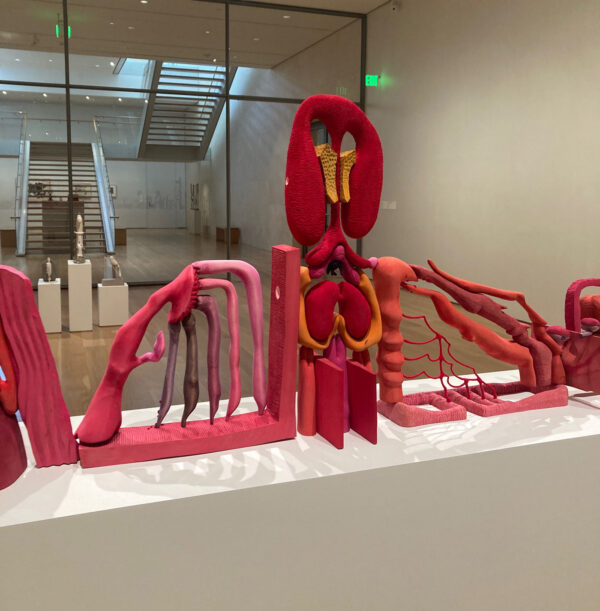 Work by Matthew Ronay, on view at the Nasher Sculpture Center. 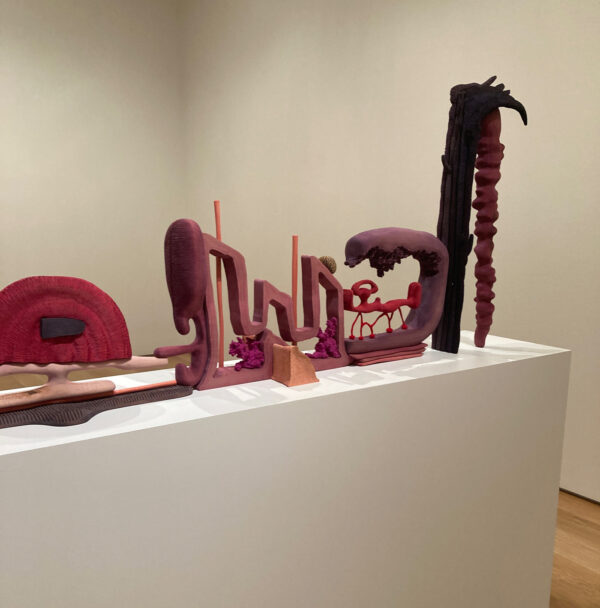 Work by Matthew Ronay, on view at the Nasher Sculpture Center.

The spidery ligaments that hold together Matthew Ronay’s The Crack, the Swell, an Earth, an Ode seem joyously chromatic from a distance. When inspected more closely, fine ridges that could’ve been routed by a drill bit appear on the surface of the limb-like pieces. The Nasher states that this is the artist’s largest work to date, the result of merging “nearly three dozen drawings.” Its many vaguely familiar shapes are oriented lengthwise into a long line, culminating in a centerpiece that recalls lungs.

Associate Curator Leigh Arnold states that the work is intended to be “read,” which brings about associations of sequence and narrative. Ronay’s shapes are reminiscent of the playful (and melancholy) squishes and squiggles Michael Deforge illustrates in his comics. While Ronay is not working in something as legible as the graphic novel, there is a skill here akin to that of an expert illustrator. A stray line can turn a shapeless mess into an intriguing ensemble. 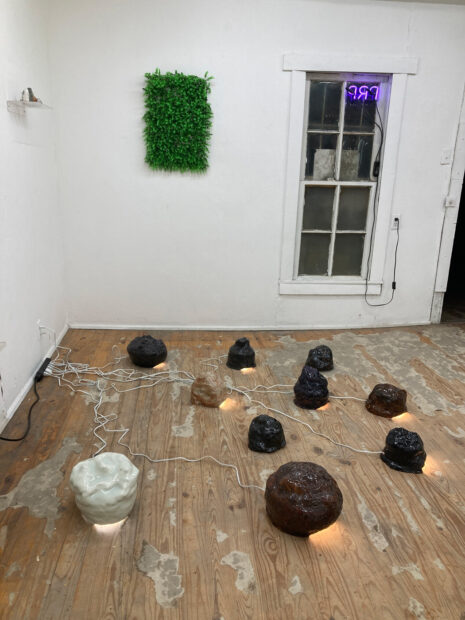 Work by Hector Ramirez, on view at PRP. 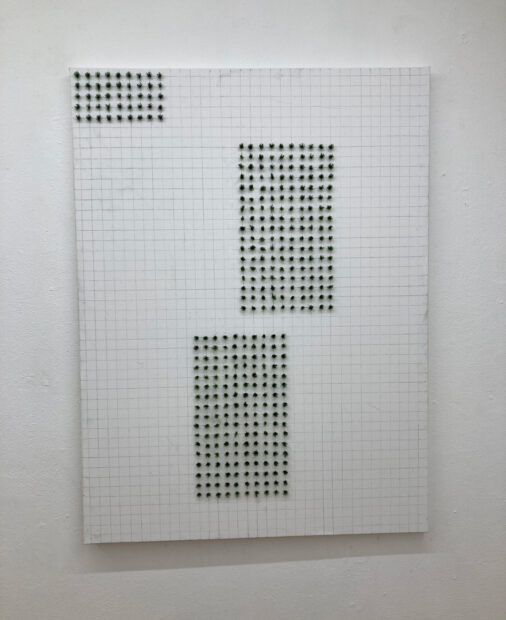 Work by Hector Ramirez, on view at PRP.

At PRP in the Tin District of West Dallas, Hector Ramirez exhibits new work that pushes beyond the conceptual sculpture he has produced for years.

When entering the gallery’s main space, viewers are greeted by a collection of glossy, bulbous mounds on the floor, which emanate light beneath them in thin strips. A triptych of paintings sits on the adjacent wall; one white, one monochrome in bright yellow, and one that mixes patches of purple and red. Upon further inspection, the wall surrounding them is treated with the same scumbled texture. When I ask Ramirez about this surface that is present in his wall pieces, he says he uses drywall mud, a joint compound made of gypsum for covering sheetrock. It is a generous texture; it can obscure inconsistencies, snags, or gouges in whatever it covers. It is also the most affordable wall surfacing option for construction applications. I asked Ramirez to expand on his use of drywall mud further:

“I use this material just because it’s something I grew up with, working with the family. In grad school it was like, I’m around all these people that are really good at painting or printmaking. And I was kind of trying to find myself, like, what am I good at?”

Ramirez is using a construction material in painting, a concept he is still working through. Other wall-based works are white and lightly gridded, with tufts of fake grass poking out from the vertices of the lines. He feels that the ubiquitousness of the texture in housing builds insinuates a position of class; a lack of pretension.

“It’s funny because it’s a house painter’s thing, it’s not a painter’s painter kind of material. So I kind of like that. I like playing with that.”