On Saturday, July 12, the Contemporary Arts Museum Houston hosted poets Kenneth Goldsmith and Christian Bök for a series of lectures and readings. Both Goldsmith and Bök represent growing spectrum of writers that constitute a polarizing subgenre variously known as “conceptual poetics,” or “uncreative writing.” Employing strategies of plagiarism, cut-and-paste, style remixing, and a general denial of authorship, uncreative writers are less interested in actual writing than in curating words that are usually not their own. The idea is to build text around a central concept, establishing a “thinkership” as opposed to a readership. Because of this, most uncreative writing is, as Goldsmith proclaims, unreadable. 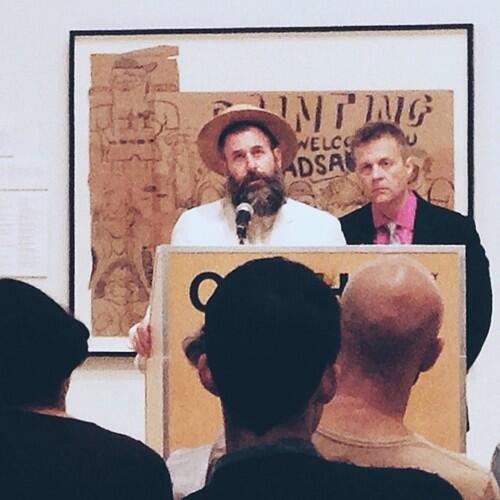 Or is it? Why, exactly, would it be unreadable? Because it is boring? Difficult? Intentionally stupid? Have we become so caught up in Fifty Shades of Grey and The Hunger Games that we are incapable of finding aesthetic value in anything that doesn’t feed us a linear narrative? Since Duchamp flipped over a urinal and called it art in 1917, we have been groomed to reconsider the peculiar, frustrating, and even absurd in a new way—to expand our visual literacy, to decode that which isn’t obvious. From Abstract Expressionistic paint-flinging to John Cage’s glorious silence to the fantastically mundane films of Chantal Akerman, we have been inundated with difficult work in just about every medium and genre. So what makes writing different?

Nothing. Most conceptual writing is not only readable; it should be read. Take this short excerpt from Goldsmith’s Day (Great Barrington, Mass.: The Figures, 2003):

In Day, Goldsmith has transcribed an entire day’s issue of the New York Times: from the articles all the way down to the painful minutiae of each advertisement. Now, sure, we can breeze over the excerpt, shrug, and say, “OK, got it, he’s showing us the tedium of a day.” Then again, that would completely miss the point. Yes, Day may be tedious—even exhausting—but the choices Goldsmith has made are specific and noteworthy. By collapsing and homogenizing the font, he has transformed a tightly organized piece of information into a quiet yet schizophrenic prose poem. The very thing we use to understand what’s going on in the world around us is now a stuttering cacophonous mess of weather, articles, copyright notices, and ads constantly interrupting each other. Also, this isn’t just any newspaper: it’s from New York City, on Friday, September 1, 2000. Goldsmith is holding up a mirror, reflecting back to us our rhetoric of the recent past. Without reading the unreadable Day, we could only speculate on that rhetoric. But in reading it, we can feel the texture of that rhetoric, think about how it influenced our thoughts then, and how it infiltrates our thoughts today. Despite his blatant copying, at least in Day, Goldsmith’s authorial hand is strong and expressive.

But interestingly, Goldsmith and company appear outwardly allergic to the very notion of expression. In fact, he and colleague Craig Dworkin co-edited an anthology of conceptual writing in 2011 entitled Against Expression. As he conducted his completely plagiarized lecture with an affect akin to a hypnotist reading Jack Handey’s Deep Thoughts, Goldsmith hurled declarations at the audience like, “writing is just pointing,” and, “writing is just management of data.” When CAMH director Bill Arning asked about their theatrical delivery (Bök sounded like a hellfire Baptist preacher to Goldsmith’s hypnotist), both sounded mildly apologetic. Their excuse was essentially that they are old, and the kids these days are increasingly inexpressive in an effort to remain loyal to the text. Some will even go so far as to not even read during their live readings—they simply show their writing.

Sure, information is the new detritus. But to claim that we are little more than managers of an ocean of data is what is truly naïve, because to coldly make that claim is to deny our basic human impulse to filter, organize, and make sense of chaos. Artists, writers, everyday people: we don’t just gather information, organize it, and say, “look, information!” We instead use that detritus to rebuild, creating new infrastructure, pushing thought forward. This is why we now have so many illegible, highly specific specialties. This is why conceptual writing even exists as a sub-genre, why there is a hierarchy within, and why Goldsmith is at the top.

When Christian Bök wrote Eunoia (Toronto: Coach House Books, 2001), a book comprised of five chapters, each chapter only using words containing each vowel, he could have simply rattled off all the words in the dictionary only containing the letters “a,” “e,” “i,” “o,” and “u.” But he didn’t. He carefully placed punctuation and arranged words to build a story. It may be nonsensical, but it is a story nonetheless. Here is the beginning of chapter A (for Hans Arp):

Awkward grammar appals a craftsman. A Dada bard
as daft as Tzara damns stagnant art and scrawls an
alpha (a slapdash arc and a backward zag) that mars
all stanzas and jams all ballads (what a scandal). A
madcap vandal crafts a small black ankh – a hand-
stamp that can stamp a wax pad and at last plant a
mark that sparks an ars magna (an abstract art that
charts a phrasal anagram). A pagan skald chants a dark
saga (a Mahabharata), as a papal cabal blackballs all
annals and tracts, all dramas and psalms: Kant and
Kafka, Marx and Marat. A law as harsh as a fatwa bans
all paragraphs that lack an A as a standard hallmark.

Conceptual poets are authorial and expressive, as they should be. If they weren’t, they would be cranking out the same postmodernist drudgery that has been floating around the art world since the ‘90s. After all, we are past pointing.

The notions in this article and this practice of Goldsmith and Boek owe a heavy debt to Roland Barthes “Death of an Author’ written in 1967. There have been countless works catalyzed from the Barthes text. Michel Foucault aptly responded to Barthes with ‘What is an Author’ in 1969. Barthes’ and Foucault’s debate is a far stretch from the practices and interests of Marcel Duchamp nor John Cage. Do we really need to keep bandying on about these Sacred Cows? If you are to make a comparison to other artist’s work, why not mention someone like German artist Josef Strau who has been very vocal about Barthes influence on his practice.