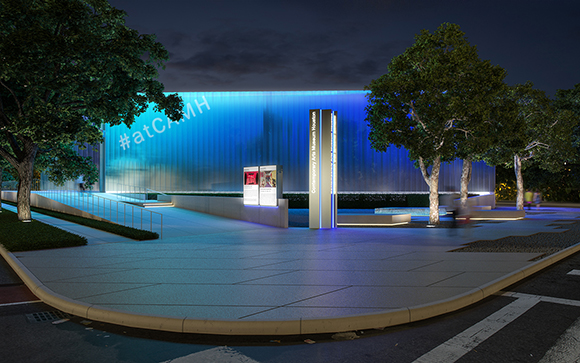 Two new developments at the Contemporary Arts Museum Houston (CAMH) have been announced. The first is the CAMH’s New Perspectives Capital Campaign, its first in 20 years. The goals of the campaign, as stated, are to expand public gathering space, add visibility, stabilize key infrastructure, clarify signage, and support the museum’s mission.

As of mid-July, the CAMH has secured 74% of its $3.1 million goal, including a 100% participation rate from its Board of Trustees. Phase I of New Perspectives was completed in February, 2019 and was marked by a relocation of the CAMH’s offices from its old house offices of 22 years, to its new location, which is one block north. Phase II, marked by repairs to the museum’s garden and infrastructure, is set to begin in the coming months, and progress can be followed online here. “I am honored by the outpouring of support for this exciting project at CAMH,” says CAMH Board of Trustee Chair Dillon A. Kyle. “It is compelling to bring such critical improvements to the Museum following the 70th anniversary of its inception, and equally important is the way in which these changes will make CAMH more accessible and welcoming as a hub of creative and cultural discovery within the community.”

In another CAMH development that addresses access and community, The America Alliance of Museums (AAM) has selected the CAMH to participate in its national initiative Facing Change: Advancing Museum Board Diversity & Inclusion, which seeks to diversify museum boards and leadership. A 2017 report by AAM highlighted the need to address the absence of people of color on museum boards, finding that 46% of boards are all white. Existing board chairs and museum directors agree that this is a problem.

As reported in Glasstire, there is a dramatic inequity in funding for some minority organizations in Houston. Although lack of funding for organizations that predominately serve people of color does not directly address the lack of diversity in museum boards and leadership, it perhaps points to a general disparity that is endemic in arts organizations across the board.

Facing Change is funded with grants (from The Andrew W. Mellon Foundation, Alice L. Walton Foundation, and Ford Foundation) totaling $4 million, and will be applied to training and resources for museum leaders in an effort to foster inclusivity that reflects the diversity in the communities they serve.

CAMH Chair Kyle is quoted in the museum’s press release stating that the process of acknowledging the need for diversity has already begun at the CAMH. “As a cornerstone of contemporary art and culture in the region, CAMH has already begun the process of addressing the institution’s desire to be systematically representative of this city. We embrace the importance of this process and we are appreciative of the opportunity to play a pivotal role in helping to address this not only in our community but to serve as a pioneering institution in assisting museum’s across the country to do the same.”