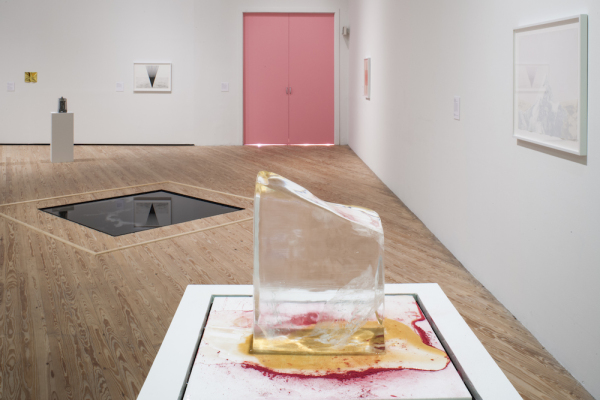 As befits a young artist putting together her first museum show, which is also her second solo show, Debra Barrera gives it all she’s got, collecting works in several modes: worked-over graphite drawings, altered found-object sculpture, and magic-material minimalism. She displays her considerable achievements with precocious, dutiful skill. She may not be breaking any molds yet, but her best works play beauty and romance against power and technology with precision and chutzpah.

Three of Barrera’s best pieces hint, semi-seriously, at an unashamedly ballsy ambition, boastful in a way familiar from hyper-masculine 70’s artists. As with those artists, Barrera’s boasting sometimes gets a little unseemly, but that willingness to brag is itself, in Barrera’s feminine hands, a startling turnaround. 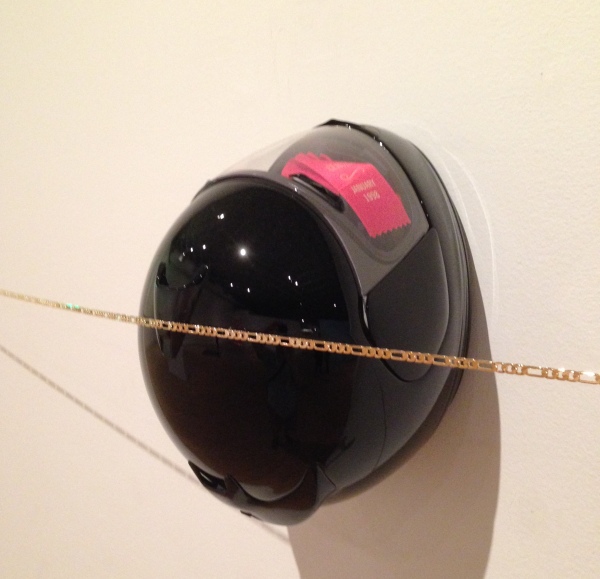 Number Gold is autobiographical. A slender golden chain holds a glossy black motorcycle helmet to the wall; inside the closed helmet, trapped like a butterfly inside an upturned glass, is a red ribbon — an art award Barrera won in 1998, when she was 13. The piece is a big trophy, bursting with “Look at Me, Ma!” pride. There’s a note of feminist triumph, too: the blocky chain and the polished helmet combine strength and beauty. 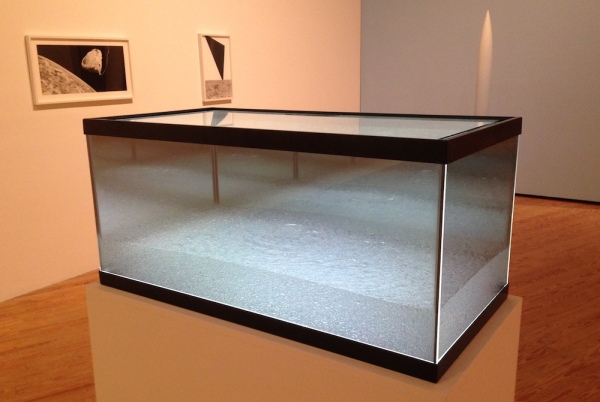 Endless Dep reiterates this Powerpuff Grrl duality with a Mystery Science Theater humor. It’s a fish tank half full of hair gel, illuminated from underneath. Zillions of bubbles trapped in the transparent goop catch the light, making it glow as if it was a form of sentient life. It’s a simple, gee-whiz materials piece, but in the context of the show’s braggadocio, it gets some traction. Even Barrera’a hair gel is powerful. 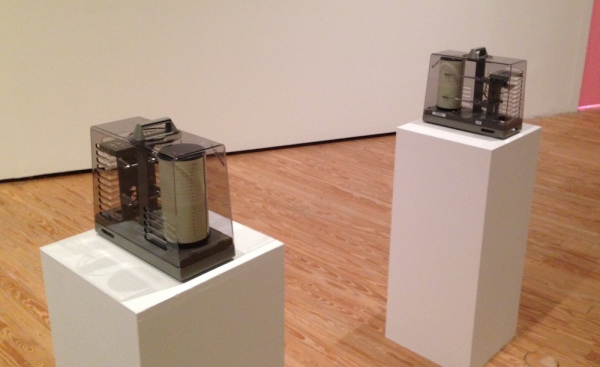 Barrera cements her museum-quality status by throwing in a pair of hygrothermographs. You’ve seen these boxy instruments recording the temperature and humidity at the Met and the Louvre; now here they are tracing the ups and downs of Barrera’s “masterpieces”. 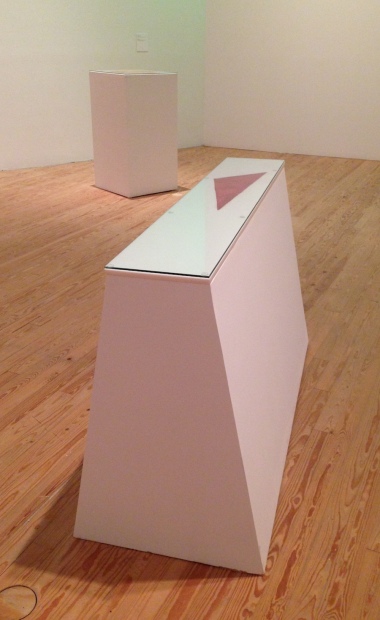 New Monument For Us, 2014. Thassos marble and pure pigment

A group of more abstract, non-found object works present elemental materials with names off a restaurant specials board: Thassos marble, pure pigments, silicone oil, galvanized steel, distilled water. These evocative materials suggest an alchemical magic, but the physical objects are blandly formal, failing to evoke the kind of transcendence they seem to be shooting for. 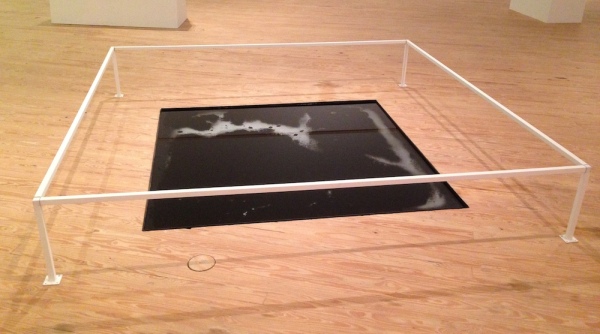 Floating CAMH, 2014 (note appearance of this piece without awful fence in the above installation shot!)

The largest of them, Floating CAMH, is a five foot square pan set into the CAMH’s floorboards, filled with a gleaming pool of black liquid. With a little effort, (made more difficult by the unfortunate white safety fence around the piece) one can imagine the CAMH’s boat-like deck afloat on a hidden sea of ink. With a whole lot of effort, one can imagine it’s a hatch into deep-space void, which seems to be the idea: the pool is paired with a tabloid newspaper whose headline reads “Life in Orbit.” 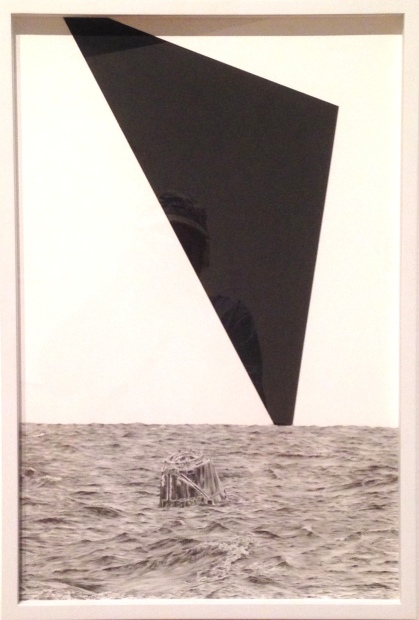 Dragon in the Pacific (SpaceX Capsule 2012), 2013 graphite and compressed coal on paper

When Barrera’s not boasting, she’s Judy Garland, voicing a somewhere-over-the rainbow wistfulness, hinting or hoping for something magical just out of sight. Space technology and the sky stand in repeatedly for hopes dashed or hopes fulfilled: fussy drawings of a splashed-down space module, and a deflated high-altitude balloon hang not far from a sky-blue model rocket. Poised to launch, it’s titled Together Forever. 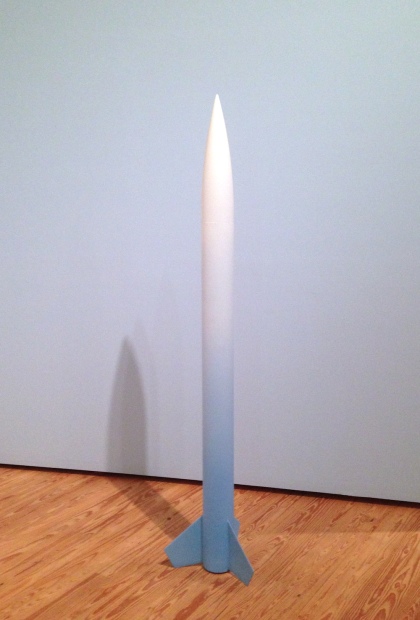 A set of very tall doors, part of the CAMH’s usual architecture, are transformed into a piece with Pepto-Bismol pink paint. Intense pink light seeps out under the door, suggesting a hidden, luminous power, like the light of heaven or the magical gate to Barbie’s Dream Castle. 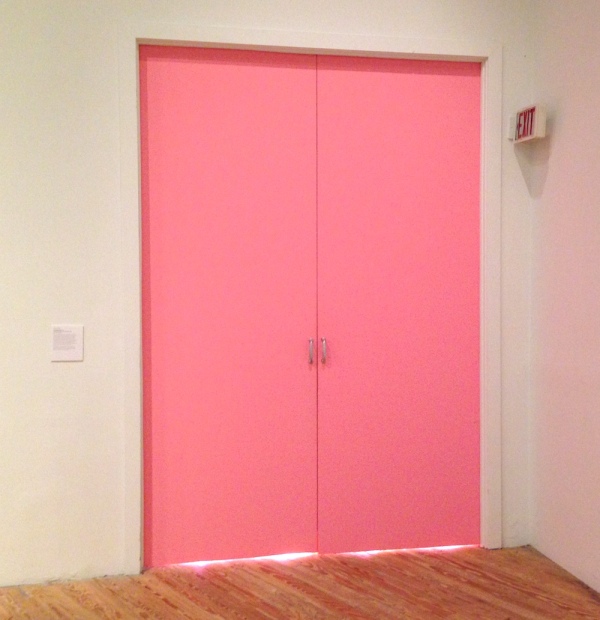 Avalon, the title piece for the show, sums up Barrera’s recurring strategy of suggestion: she has written a poem and gift-wrapped it in gold Mylar. We are left to imagine the poem itself, but it’s presented as Barrera presents herself: as something special. 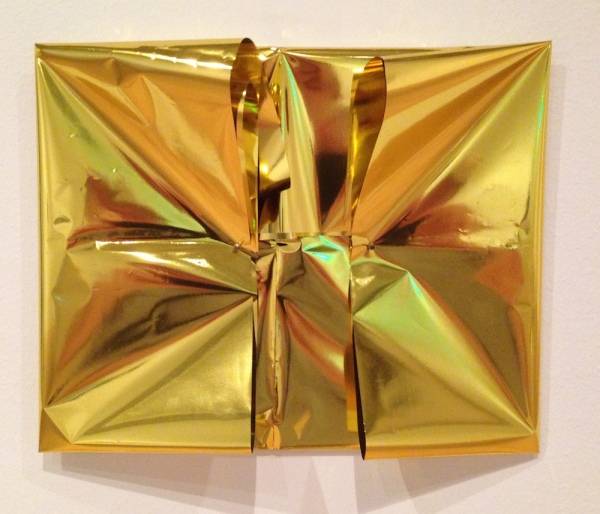 Avalon, 2014. Gold wrapping paper and a poem written by the artist