In his current show at the Fort Worth Modern, Fred Tomaselli suspends layer upon layer of cutout images of flowers, jewels, bodily organs, and wildlife in resin like dazzling reliquaries attempting to achieve a state of utopian transcendence. 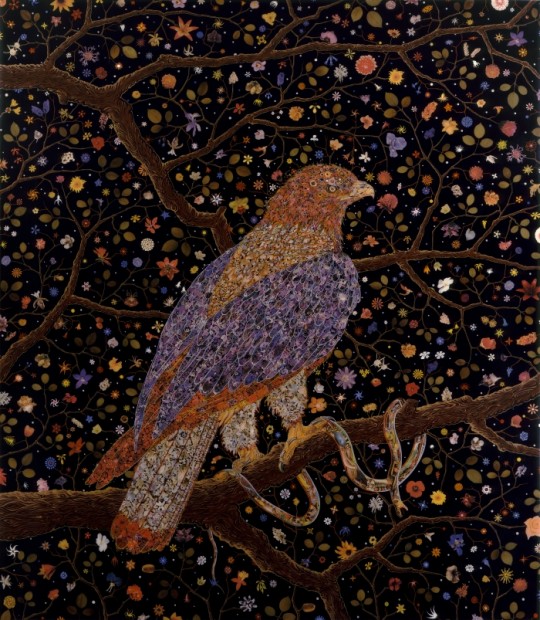 Entering the exhibition, one is astounded by the intricacy of the works that seem to house all of earthly existence. Creating larger images out of the small cutouts, as in Avian Flower Serpent, which depicts an eagle perched upon a limb with a snake in its talon, Tomaselli’s works mimic microcosms of reality. Their seemingly endless black backdrops give them a sense of cosmic scale.

Resplendent as they are, one can become unnerved staring at Tomaselli’s works, feeling diminutive before the expansive space they seem to occupy. The tiny individual images, floating in layers of resin are a fraction of the size of the objects they represent. The snake in Avian Flower Serpent is created out of smaller images of serpents, causing me to ponder the world order that Tomaselli represents as well as my place in it.

Tomaselli’s Flipper, 2008, is an expansive series of ovals created with cutout images of flowers, jewels, and human hands. Created for Prospect 1, the 2008 New Orleans Biennale, the three panels transect each other, creating an abstract design that simulates a slowed-down sound wave that encourages viewers to walk back and forth in front of it as their eyes follow its lines. What sound does it represent? The viewer is not told. Nonetheless, one begins to realize that, though this work is so large and is comprised of so many elements, it represents a sound that would last only a moment. 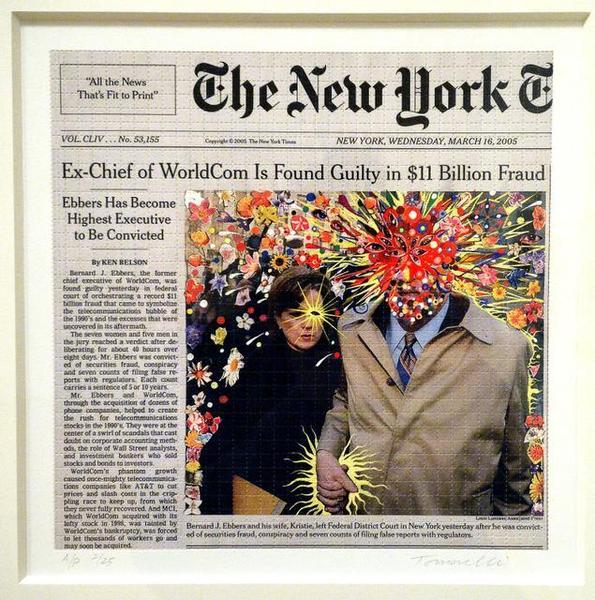 In Tomaselli’s New York Times interventions, the artist paints and reworks covers of that periodical into fantastical abstract creations, highlighting its headlines and emphasizing the surreal realities behind them. In Guilty, for instance, the artist alters an image of Bernard J. Ebbers and his wife after being driven from Wall Street having been convicted of securities fraud, surrounding the couple with a landscape of brightly colored flora. What drew Tomaselli to the image was not the couple’s avarice but their humanity, which is exposed as he clutches her hand guiding her through the mob of reporters, “as if being expelled from Eden,” according to the artist. 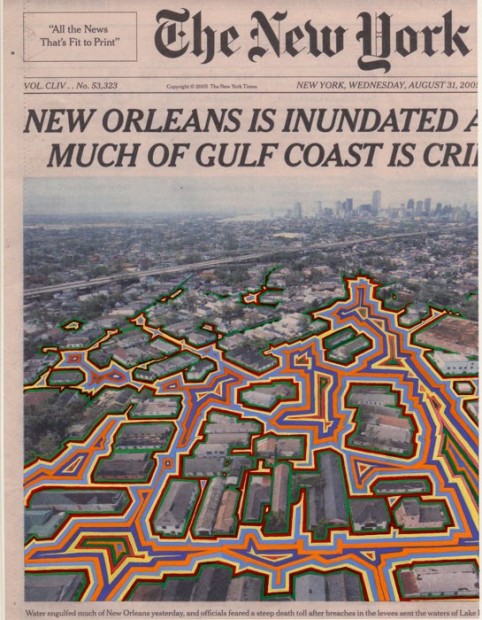 Taking and altering images that document crises around the globe, and turning them into surreal landscapes, Tomaselli reveals their underlying absurdity, as in August 31, 2005 #2. Turning a tragic image of the risen waterline of flooded New Orleans into a Technicolored geometric composition, Tomaselli inundates the buildings with pattern and captures the feeling of utter astonishment that lay in the hearts of all Americans as they watched the destruction of this mythical city.

Having grown up in the shadow of Disneyland, Tomaselli transforms the everyday into landscapes of whimsy that are both cosmic and moody, causing viewers to consider their own place in the universe. Loaded down with imagery, his works entice viewers to get closer, and for a second, get lost in the world he has created.

Focus: Fred Tomaselli, curated by Alison Hearst, will be on view at the Modern Art Museum of Fort Worth through March 23, 2014.