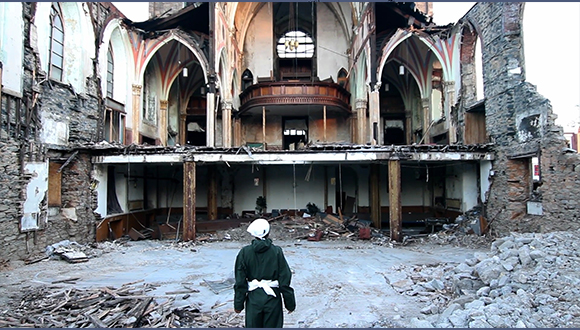 Prospect New Orleans has announced its artist list for its 2020 triennial, Prospect.5: Yesterday we said tomorrow. It opens to the public on Oct. 24 and will be on view through January 24, 2021. The list includes Los Angeles-based artist Mark Bradford, who was in the first Prospect New Orleans more than a decade ago with his sculpture Mithra. Also on the list is the late Georgia-born artist Beverly Buchanan (1940-2015) with her Southern vernacular architecture shack sculptures, and Simone Leigh. Leigh will install a temporary public monument on the site of Confederate General Robert E. Lee’s sculpture, which was taken down in 2017, 133 years after it was erected.

The artist list for the citywide exhibition features artists from the United States, Canada, the Caribbean, Africa, and Europe, and will be presented in museums, cultural spaces, and public sites throughout New Orleans.

Works from Bradford, Leigh, Kevin Beasley, Glenn Ligon, Wangechi Mutu, and Nari Ward are commissioned specifically for Prospect.5. Ligon’s new work confronts the history of monuments and memorials in New Orleans, while Beasley’s will consider issues around land, inheritance, and ownership. There will also be a new bronze sculpture by Mutu, which proposes a hybrid between humans and the natural world.

Prospect.5’s curators and artistic directors are Naima J. Keith, Vice President of Education and Public Programs at Los Angeles County Museum of Art (LACMA), and Diana Nawi, an independent curator based in Los Angeles. They have organized this triennial round the theme “Yesterday we said tomorrow,” inspired by the title of Christian Scott’s 2010 album Yesterday You Said Tomorrow. Scott is a New Orleans–born jazz musician. (The album references a reality that resonates in New Orleans and beyond — that change is often delayed, and often denied.)

Many of the Prospect’s projects for 2020 will explore the state of the city since Hurricane Katrina in 2005 and the launch of Prospect in 2008, and draw heavily on the perspectives of artists of African descent, with more than 60 percent of the artists being black.

States Keith in a press release: “One of the key features of Prospect has always been the vibrancy and complexity of New Orleans itself and our exhibition seeks to be attuned to that. We brought together what feels like a truly diverse group of artists, ranging from emerging to leading voices in the field, around ideas. We wanted to take on ambitious projects with emerging artists, to revisit familiar names through bold new endeavors, and to undertake an in-depth look at the work of recent art history.”

Prospect.4: Art Cannot Save The World

Prospect.5 Triennial Set to Open this Weekend in...

Typo: “ They have organized this triennial round the theme…”