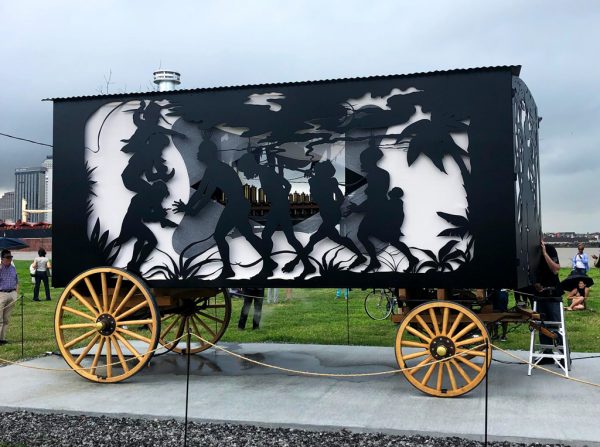 Now in its fifth edition, the triennial was founded by curator Dan Cameron as a response to the damage Hurricane Katrina wrought on New Orleans in 2005. In his experience organizing biennials the world over, Mr. Cameron found that large-scale art events had both social and economic benefits for their host cities. Consequently, he believed that an art event featuring prominent contemporary artists could both benefit the city, and the country, as he noted that the US lacked a biennial comparable to those in other parts of the world.

The triennial’s upcoming iteration, which is fittingly called Prospect.5, is scheduled to run from October 24, 2020  through January 24, 2021. The event’s Co-Artistic Directors are Naima J. Keith, formerly of the California African American Museum and recently appointed Vice President of Education and Public Programs at the Los Angeles County Museum of Art, and Los Angeles-based independent curator Diana Nawi.

Eight other curators from across the US will serve on the event’s Artistic Director’s Council:

Ms. Nawi commented on the co-curators’ decition behind the eight-member council:

“We looked to colleagues that we knew had a range of experiences producing meaningful exhibitions in a variety of regional and global contexts. This exhibition is very much emerging from a dialogic position, and this amazing group will be critical interlocutors for us in this process.”

In addition to exhibiting art by national and international artists, Prospect.5 and its organizers are putting in work to make sure local talent does not go unnoticed. This is also true of the triennial’s past iterations — in the 2017 exhibition 10% of participating artists were either from or of New Orleans.

Prospect.5 Triennial Set to Open this Weekend in...

Prospect.4: Art Cannot Save The World