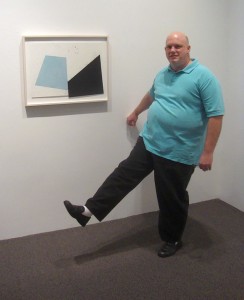 Nearly a year after the Dalllas Un-biennial, The Los Angeles Times‘ Jori Finkel spots a trend against biennials’ “supersized display of art objects.” Elisabeth Sussman, who co-curated the Whitney Biennial this year “wanted to make the experience of going to this biennial different than any other.” The Hammer Museum and the Orange County Museum are rethinking their traditional biennial shows, others like the New Museum are going triennial. Site Santa Fe, losing audience share  in the glut, has stopped producing its trademark show, at least under its trademark name: “It will not be called a biennial. And it will not be called Site Santa Fe,” said Irene Hofmann, the space’s director.

Finkel goes on with a detailed resume of biennial history that puts the cycle of boom and decline in perspective.

The Hammer Museum and Will Ferrell Take on...

Hey Robert, if you need “random, awkwardly-posed photos” of Bill, just say the word. We’ll shoot some at the next staff meeting.

Aww. It’s a great pic-I’ve kept it in a special folder for months, waiting for a chance to use it!