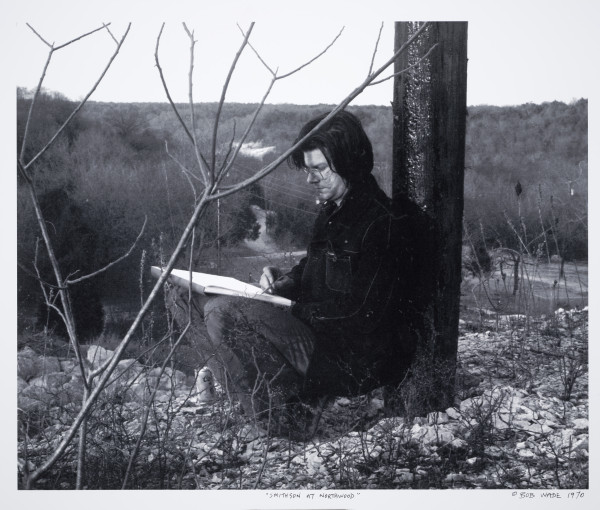 Robert Smithson in Texas, now on view at the Dallas Museum of Art, is a stunning and intimate exhibition curated by Leigh Arnold that focuses upon a key period in the artist’s career, about which otherwise is little known, revealing his indebtedness to the Texas landscape. Focusing upon the artist’s five proposed Texas earthworks, of which only one was completed, Arnold has crafted an exhibition featuring preparatory sketches, project proposals, sculpture, video and photography, allowing viewers to see Smithson’s working process and gain entry into this art world maverick’s mind.

The concept of the exhibition is an interesting one, bringing together Smithson’s thoughts and ideas rather than concrete works. What may seem like a show of paraphernalia to some, in actuality is natural for those familiar with Smithson’s “non-sites,” works that represent foreign, hard to reach locations in the American and European landscape in the white cube of the gallery using land matter, aerial photographs and maps. It is an idea he developed while working on one of his earthwork projects for the Dallas-Fort Worth Airport in 1966.

From an early age, Smithson was enamored with the American landscape. He navigated his family’s vacations in an era when a road trip actually meant piling into a station wagon like the Clampetts, needing only a map and a tank of gas. In Texas, his interest in landscape was sparked again. According to historian Phyllis Tuchman, who spoke with Arnold and interviewer Tyler Green for a recent Modern Art Notes podcast, Texas is where “Robert Smithson became Robert Smithson.” It is in Texas that the earliest formations of Smithson’s notions about sites and non-sites occurred, making his time in Texas crucial to his body of work. 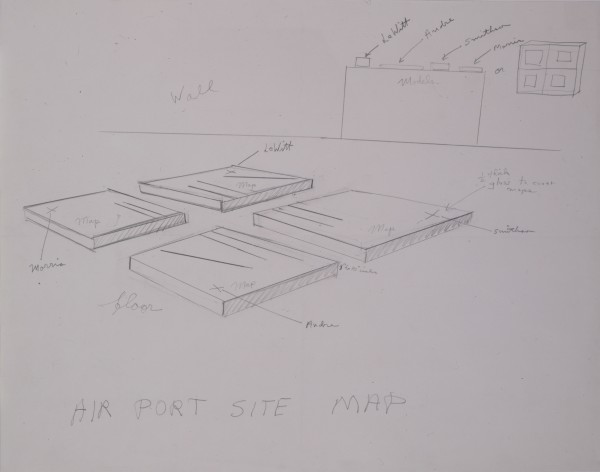 Inundated with resources such as aerial photographs and topographical maps by the architectural firm of Tippetts-Abbett-McCarthy-Stratton for his proposed Dallas-Fort Worth Airport project, Smithson for the first time began to pay attention to the forgotten corners of the property, seeing the airport not as a singular building with terminals and runways, but as a vast landscape of overlooked areas. As seen in Airport Site Map, c. 1967, Smithson proposed the creation of works on the outskirts of the complex by himself, Sol LeWitt, Robert Morris and Carl Andre—works which sadly never left the conceptual stage due to the scrapping of the project. Smithson’s earth windows, a portion of earth that has been removed and filled with broken glass with light shining through from below, LeWitt’s wood cube encased in concrete then buried three feet under the earth forever hiding from viewers, Morris’ proposed circular earth mound, and Andre’s acre of bluebonnets or dropped bomb, whose crater would have scarred the land, were meant to have been seen either from above by passengers on board their flights or from inside the terminal via live video feeds causing viewers to pay attention to the outskirts of the land and highlight their divide from it.

Incorporating artwork into our daily lives seems standard for Dallas-Fort Worth, with works occupying spaces in Northpark Mall, Texas Stadium, the current DFW Airport, and our newly renovated Love Field. Smithson’s project, revolutionary both in its own time and in our own, would have been a living artwork for the DFW area untainted by its successors’ decorative inclinations. Changing with the seasons and in time, Smithson’s project would have been a continually evolving artwork, eventually succumbing to the entropic process, and most likely would have become a destination for art lovers from around the world. 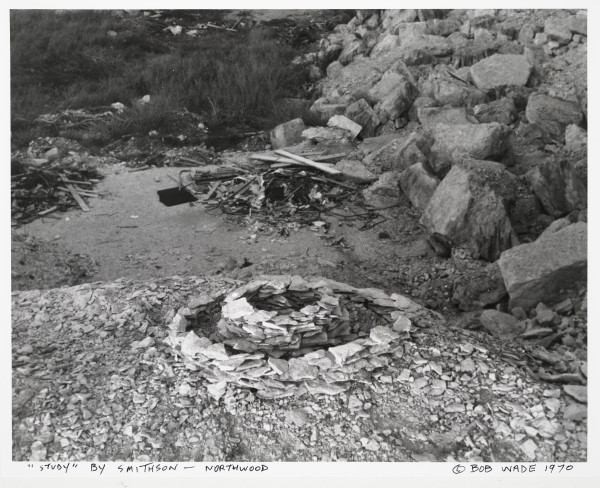 Robert Smithson Maquette for “Texas Overflow,” shows Smithson’s inclination towards landscapes marked by dilapidation and industrial blight, recalling his Partially Buried Woodshed created in the same year at Kent State University. In Texas Overflow, the artist proposed an artwork in an abandoned quarry on the Northwood Institute’s property. An assemblage of limestone mined from the quarry was to be arranged into a circle and filled with asphalt to resemble a lava overflow. This work would have reclaimed this forgotten corner of the institute. 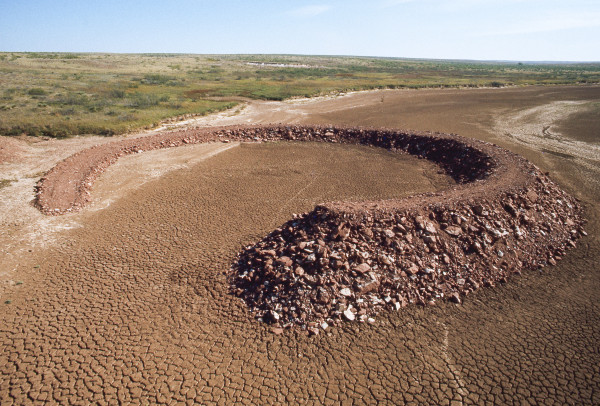 Then there is Amarillo Ramp, the artist’s last and only realized Texas work, begun in 1973 by the artist and completed posthumously by his collaborator and wife Nancy Holt and his close friends Richard Serra and Tony Shafrazi. Amarillo Ramp is brought to us via sketches, photographs, and by a video created by Holt entitled The Making of Amarillo Ramp, completed in 2013, which makes its debut in this exhibition. The ramp is a broken circular spiral hill intersecting what was formerly Tecovas Lake in Amarillo, a man-made irrigation lake created by landowner Stanley Marsh. Meant to be approached from a bluff, the work is partially sunken into the lakebed, making it seem small at first. Viewers get a better understanding of the work as they descend to the ramp’s entrance and then ascend its slope, rising above the landscape. In Arnold’s words, “with every step the expansive sky and landscape expands with 360 degree views of the Amarillo landscape,” revealing it to viewers as if for the first time.

Though a titan of the earthwork movement, Robert Smithson, who died at age 35 in an aviation accident at the site for Amarillo Ramp, completed only eight earthwork projects. He left behind projects and works on the drawing table. These remnants, his sketches and proposals, are works in and of themselves, guiding viewers through Smithson’s meticulous and thought-provoking process.

From 1966-1973, Robert Smithson returned to the Texas landscape time and time again. Each of his proposed Texas earthworks nudges us to pay attention to the state’s wide open plains and never-ending sky. Though we may not have four of his originally proposed works to visit and experience, Robert Smithson in Texas reminds us to be aware of our own surroundings and opens our eyes to the possibility of art as a re-generative process that can enliven blighted and forgotten landscapes. With Amarillo Ramp, Smithson’s final work, we begin to realize the extent of the artist’s infatuation with our state. He’s begging us to claim him as one of our own.

Robert Smithson in Texas runs through April 27 at the Dallas Museum of Art.