by Bill Davenport May 2, 2012
FacebookTwitterEmail 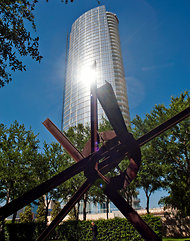 There’s nothing like dirty laundry to attract publicity, or as Dallas Observer columnist Jim Schutze put it, “nothing takes our minds off this misery we call middle-class survival in America like a rich kids art fight.”

Renzo Piano is reportedly “furious,” Scott Johnson, the architect of the tower’s current form is conciliatory, but insists that it’s not just his problem. Mayor Mike Rawlings, philanthropist DeeDee rose, and Arts District head Veletta Forsythe Lill all put in their two cents. Times reporter Robin Pogrebin reflects on the difficulties of using cultural institutions to drive economic development (when it works!), and  speculates that Raymond Nasher is spinning in his grave.

And the article features the best glare picture ever, by Brandon Thibodeaux!

Museum Tower, in Need of Louvers, Gets New...