According to exhibition literature, Parallel Practices: Joan Jonas & Gina Pane at the Contemporary Arts Museum Houston (CAMH) “celebrates the shared and complementary aspects of Jonas’ and Pane’s art, and highlights the differences that characterize their unique bodies of work.” The artists share being females of the same generation, working against the grain of the patriarchal art establishment, and using themselves and their bodies as inception, means and end to art production. They also range freely amongst artistic mediums and combinations thereof, presaging contemporary artists’ obsession with “inter-” and “transdisciplinarity.” Their differences are too multifold to investigate here in full; that said, Jonas and Pane are at especial odds in terms of bodily subjection to pain. Pane’s practice revels in an active masochism. 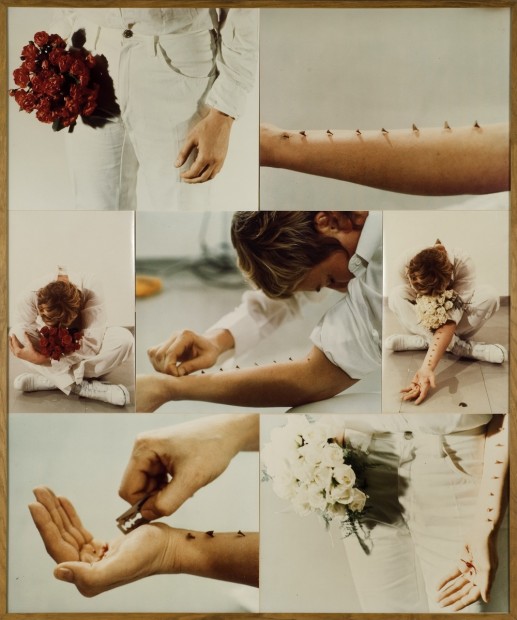 Jonas was one of the original artists to harness the potential of the Portapak (portable video recording system) to produce crew-less autobiographical performative video art. To make the single-channel video Good Night Good Morning (1976), she repeatedly recorded herself at the opening and close of her day, resulting simultaneously in an address to the world and a note to self. The work is a precursor of today’s predilection for transforming heretofore private aspects of existence into spectacle, which—for better or worse (and is probably more reflective of our culture of amnesia than anything else)—trumps a comprehension based more on feminism and other activism of its own period. 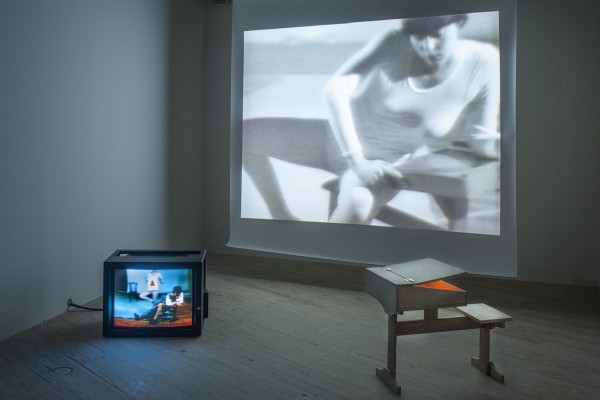 Glass Puzzle (1973-2000, exhibition copy 2013) by Jonas features a child’s wooden desk and two looping videos: one in black-and-white projected onto an unfurled roll of photo-backdrop paper, the other in color playing on a monitor on the floor. The fact that Glass Puzzle is housed in its own architectural space automatically facilitates a more unifying viewing experience. The two videos—with camera work by filmmaker and cinematographer Babette Mangolte whose credits also include films by Yvonne Rainer and Chantal Akerman—are intensely visually alluring. Performers Lois Lane and Jonas pose, move, signify, and gesture individually as well as in relation to one another. Glass Puzzle has Lane in the leotard that would come to define active and everyday 1970s fashion. The performer’s nipples—their depth of color—are muted but visibly present through the stretchy white material. Because such bodily presence is continuous with daily life (reflecting the era’s ethos), its actuality is not titillating. Yet Lane’s nipples carry a powerful erotic charge. The other performer (Jonas) also dons trademark 1970s attire: silky shimmery satin ensembles. When she caresses an arm with the opposite hand, vision is infused with touch—the haptic prevails. As if I too am in the scene, I too am stroking my irresistibly material self.

The evocative installation posits a multivalent voice (as does Parallel Practices as a whole) in which layering, circularity, repetition, and musicality, as well as indeterminacy take precedence over dominant constructions of meaning. Exceeding language, Jonas and Pane disrespect authoritarian power structures. In its upheaval of any rigid approach to signification, Parallel Practices provides a necessary counter to phallogocentrism. There are many simultaneous paths for the viewer to tread in relating to the art, and what’s more Jonas and Pane imbue their projects with an openness to multiple and even contradictory readings—fostering in the viewer a spirit of aesthetic inquiry not unlike their own. 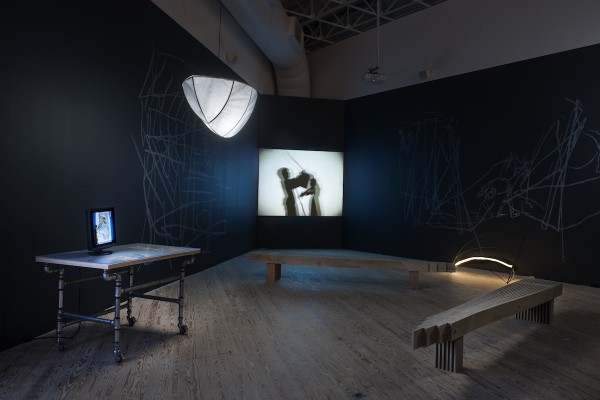 The Pane side of Parallel Practices is one big open space, in contrast to the divisions of Jonas’s side, and includes a single moving-image piece, Video of Action Little Journey (1977) looping on a modestly-sized monitor with a bench set before it. While not as elaborately presented as Jonas’ videos, and more readily overlooked, it nonetheless is essential viewing. The artist holds a tiny paper sailboat a few inches before her. A tightly framed shot shows Pane, lips slightly ajar, gently blowing the miniature boat as she uses her hands to further simulate an ocean breeze: rocking, swaying, pushing, carrying the little vessel. It is as if she has ascended Mount Olympus to influence the course of the world only to prove in the end that the world is within her…and that the pursuit of power over the external is at best a secondary endeavor. Little Journey’s smallness, simplicity, and reliance on self-as-performing-subject cause a much greater wake than would be expected. 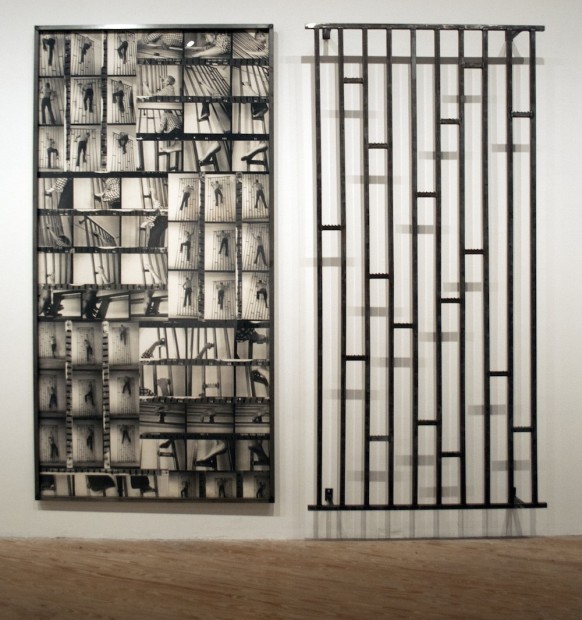 The day before my visit to CAMH, I was in conversation with a couple eight-year-olds about a particular tree with an excess of knobby prickles that we saw at the San Antonio Zoo. One child opined that the protrusions warded off creatures wishing to advance upward while the other claimed that instead they made climbing easier. The same contradictory yet equally convincing perspectives apply to Pane’s Action Escalade non-anesthésiée (1971), a multi-part work consisting of photographs documenting an endurance action performed in studio and the steel sculpture featured in the action. The images capture the artist climbing the ladder-like sculpture with—according to Pane in an Art and Artists interview with Effie Stephano—“sharp protrusions on each step” that at once enable her to ascend and cause her to “undergo a great deal of suffering and pain.” She recounts, “I wanted to emphasize the fact that the artist’s – as well as man’s – relationships are perverted in their rush to achieve a goal, in the frenzy to get ahead….people’s sensibilities are automatically anaesthetized: they’re no longer aware of the effects of their actions.” The incredibly visceral art functions as a cautionary tale, especially in the current era of torture-tainment. Appealing to the distance runner in me, eros however is its strongest force: knowing intimately one’s own pain threshold (and ultimately controlling the testing of such) opens potentialities of experience that otherwise would forever be undiscovered.

A catalog of the show is forthcoming from D.A.P.