From the perspective of a cynic, two Houston exhibitions of Mexico City-based English expat Melanie Smith could be seen along a simple dichotomy: large-scale, time-based projects are on view at a museum while smaller easel paintings—commodities for sale—are at a private gallery. Indeed, both shows are tightly focused: CAMH features Smith’s three recent video/film installations, augmented with two collections of sculptural objects; The Sicardi Gallery show is thematically organized around a green monochrome, and includes six new paintings and a two-and-a-half-minute, silent video. Cynical bifurcations aside, only by seeing both of these exhibitions one can grasp the reasons for Smith’s phenomenal success in the last decade, which resulted in the solo exhibitions at the Mexican Pavilion at the 2011 Venice Biennale, MIT List Visual Arts Center, MUCA Campus in Mexico City, Miami Art Museum, and Tate Britain, among others, and in her presence in virtually every major survey of contemporary art from Mexico.

Why this phenomenal success? Because Smith’s body of work approximates perfection. In her paintings, photographs, and videos, the artist weaves a complex but approachable matrix of references that has proven tantalizing to scholars, but can be equally seductive to a viewer who simply indulges in their poetics. On the one hand, Smith has mastered the international art idiom, based on the well-known modernist and post-modernist canon, in which the monochrome and the work of Robert Smithson take privileged places. On the other, her work is intrinsically rooted in the quotidian specificities of its localities, predominantly Mexican, but more recently encompassing also other Latin American sites, such as the Peruvian capital, Lima. This heady concoction is far from formulaic. Rather, within the complex construction, each individual piece is marked by the artist’s remarkable sensitivity to materials, whether painterly or cinematographic, and her ability to capture fleeting details of mundane, everyday experiences. Smith’s work is sophisticated and almost painfully beautiful; sensitive, but delivering astute observations; immediate, yet critical. It is familiar just enough and just a little bit new and strange. 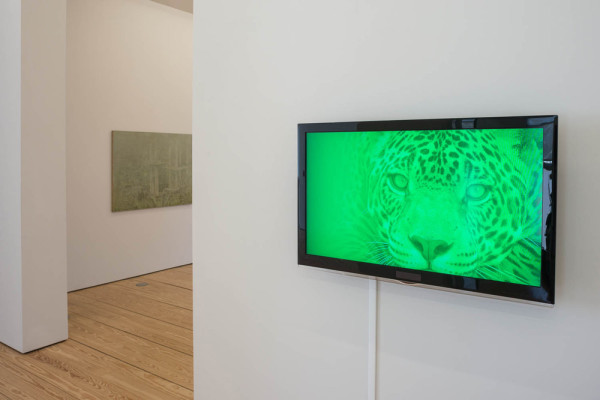 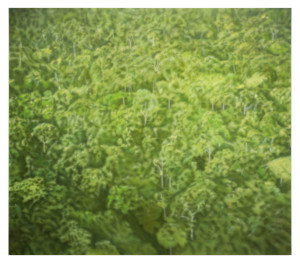 Green is the Colour at Sicardi highlights Smith’s career-long preoccupation with the limit-case of the historical avant-gardes—the monochrome. After orange and grey in her earlier works, Orange Lush and Spiral City series, Smith has now turned to green—the color rarely seen in the primary palette of modernist painting. Unlike the seminal works of the avant-garde and neo-avant-garde, her paintings are not really abstractions. The singular color stems from the artist’s investigation of concrete, specific sites. Here, green is the color of the tropical rainforest; specifically, of Fordlandia—a planned working-class settlement on the rubber plantation in the heart of the Brazilian Amazon, established by Henry Ford in 1928. Fordlandia was a modernizing, utopian industrialist dream that quickly succumbed to native customs, climatic conditions, and the sways of world economy. Today it stands as a ruin amidst the jungle. 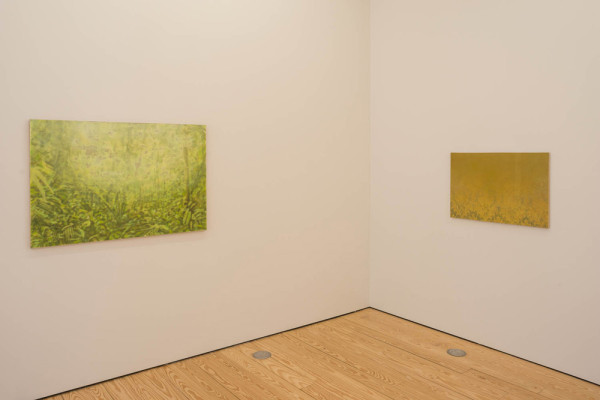 In the paintings at Sicardi, I detected few remnants of man-made constructions. Smith’s quasi-monochromes are in fact ghostly impressions of a lush landscape: fluctuating canopies sprawling beyond the field of vision and dense, tangled interiors of the forest. Air-brushed onto board or Plexiglas, manipulated by delicate scraping and burnishing, the infinitely thin surfaces of these paintings defy the relentless materiality of an actual jungle. With their allover color, they function as associative, mnemonic devices of sorts. Green is the reminder of both dreams and nightmares the rainforest embodies. 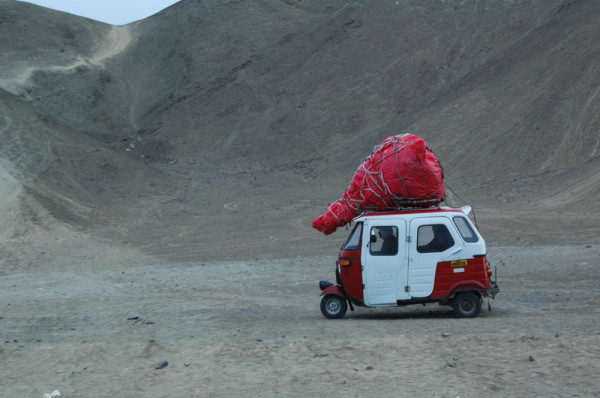 The theme of a modernist experiment subsumed by tropical vegetation ties the Sicardi exhibition to the austere CAMH show, which features three video-based installations: Xilitla: Dismantled 1 (2010); Bulto: Fragments (2011); and Elevator (2012). The ruins of another man’s fantasy appear in Xilitla, named after a village in Northern Mexico where Edward James—another English expat, poet and patron of Surrealist movement—constructed his private phantasmagoria, Las Pozas. On an expansive estate on the former coffee plantation, James erected nearly forty skeletal concrete structures, akin to both sculpture and architecture, inspired in form by tropical plants, indigenous constructions, and Surrealist imagery. Built at an enormous expense between the late 1960s and 1984, when James died, by dozens of local masons, artisans, and craftsmen, these structures were destined to be consumed by the jungle and eventually return to nature. However, a private foundation that took over the estate in 2007, has undertaken an extensive preservation effort to maintain James’s legacy, apparently against his vision. 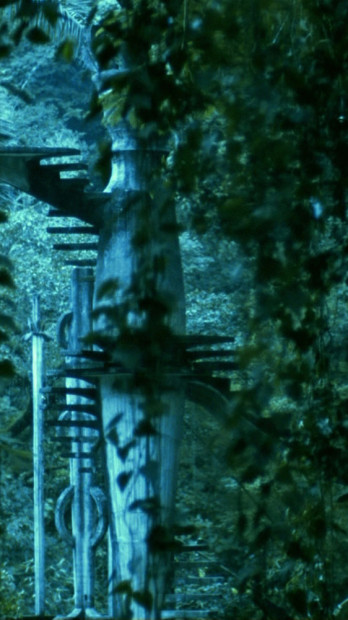 The tension between utopian construction and organic disintegration is at the heart of Smith’s installation. In Xilitla, dimly lit, misty images of the eerie, overgrown estate are interrupted by the activities of the workers hired to maintain its concrete structures. At times, viewers are confronted with their most mundane operations, like a harsh scraping sound of the shovel mixing cement. Other times, these activities seem rather extraordinary. For example, what to make of four men carrying a huge glass pane through a body of water? 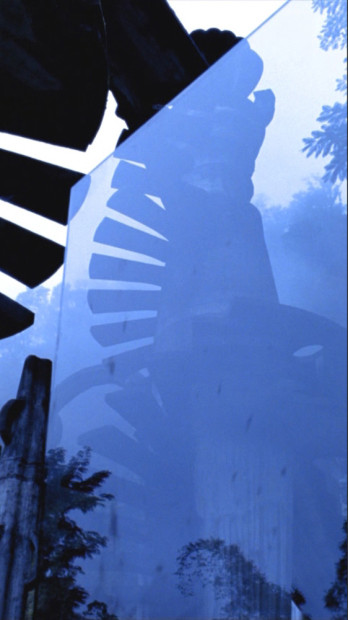 Reflective glass is itself another protagonist of the video. Often it appears as an autonomous, self-propelled device traversing the screen, refracting and splintering the carefully composed views of James’s constructions. This is a clear nod to Robert Smithson’s nine Yucatan Mirror Displacements, which—fixed as photographs—accompanied his 1969 Art Forum essay “Incidents of Mirror-Travel in the Yucatan.” A reflective device shatters the stability of man-made constructs and concepts. For Smithson, it was a means to detect “falsity” in “the notions of existence, objects, reality, etc.” [1.] Doubling such an effect, in Smith’s Xilitla, the voiceovers—which matter-of-factly register the cinematographer’s directions, like “now comes take ocho”—subvert the dreamy, stream-of-consciousness-like visuals that cohere into the imagery of James’s phantasmagoric estate. The CAMH installation—the backlit, object-like vertical screen and accompanying assortment of vintage chairs—functions as another fracturing, distancing device: the film is a film—an invention, a mirage of an unfathomable site. 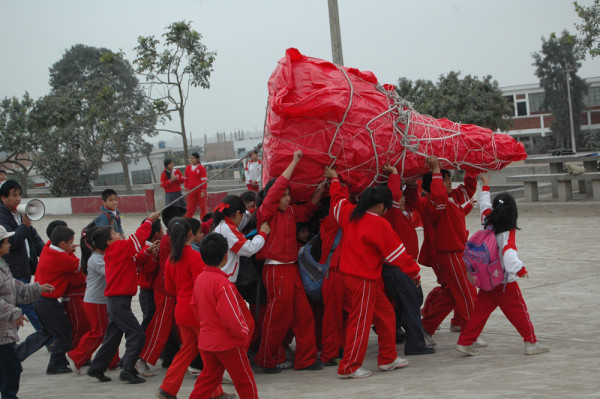 If Xilitla is rather cerebral, like most of Smith’s work, her most recent films Elevator and Bulto lean towards the absurd and grotesque. Although, just like Xilitla, both are anti-narrative and asynchronous, projected as seamless loops that a viewer can enter and leave whenever she wants, they are also the artist’s most cinematic projects. Both films present a series of strange, episodic vignettes. In Elevator, shot mostly from the interior of an elevator cabin, the door repeatedly opens onto a landing of a modernist apartment block (where Smith lives), which is populated by more and less expected denizens of the building. Their activities range from mundane to bizarre. A sniffing piglet and a guy rocking out on an electric guitar are plausible. Much more uncanny is a hectic group trying to get rid of a mysterious giant boulder. 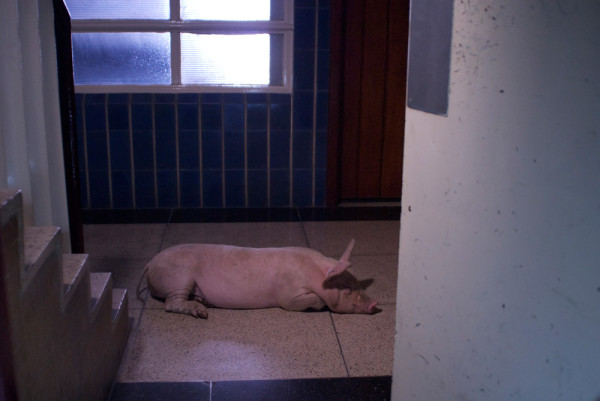 Elevator is rich in historical references: from Luis Buñuel’s 1929 surrealist classic Un Chien Andalou, through Sergei Eisensteins’s unfinished epic ¡Qué viva México! (1931), to Oliver Debroise’s genre-defying spin on the background of Eisentein’s production, A Banquet at Tetlapayac (2000). However, to me, its particular microcosm represents a surreal field guide to dwelling in a mass-housing block, which arguably defines modernism for the majority of inhabitants of the planet. Although Mexico seems very far from Eastern Europe, I see the affinity of Smith’s Elevator to absurdist comedies that marked my childhood under so-called “actually existing socialism.” The details are strangely familiar: the clanking of the elevator’s mechanism, the scratched enamel of the cabin’s interior and its suffocating size, the exclamations of disgust upon opening its door. Familiar is also the quirky motley crowd that lingers in this extremely constrained space. This crowd distinguishes Elevator from Smith’s other works, defined mostly by carefully orchestrated landscapes, cityscapes, and objects. 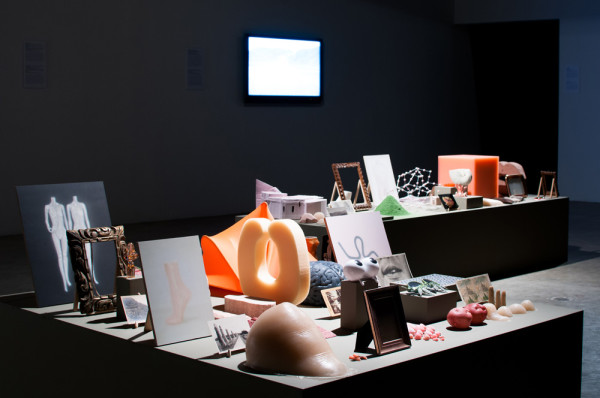 The unruliness of this crowd trumps the perfection that comprises the formal aspects of the film, its beautifully composed frames and ingenious editing. It also gives the work a sense of urgency that I found missing in the elegant paintings and other, more detached videos. Elevator seems to suggest that the legacies of modernity in the “tropics” can be actively engaged rather than just contemplated. I look forward to seeing whether it also marks a long-term shift in Melanie Smith’s work.