“Do something to me that you will regret but you won’t apologize for!”

These were instructions delivered by Clifford Owens from a score written by Steffani Jemison as a part of the CAMH’s performance series for Radical Presence: Black Performance in Contemporary Art.

And so the audience tore his shirt, threw beer on him, pulled his pants down, called him stupid, called him the n-word, slapped him, pushed him to the ground and kissed him.

Owens chided the audience for doing the same things that are always done, but he did not seem to reflect on whether it may be because he usually provokes in the same way.

This was my third time in the audience of Mr. Owens. I decided to go when I read that the scores to be performed were written by other artists who, like Jemison, create compelling and complex work. But despite their diverse sources and interesting instructions, the performances were all subsumed by Owens’ performing of them.

He wants to “fuck with us,” “get high” with us, to invite us to the saddest shred of a gesture with congeniality-free cans of beer in the basement of a contemporary art museum. These and the instructions that everyone photograph him and put it on Facebook were his original contributions to the overall performance. He slumped into a familiar sadomasochistic cycle of tenuous camaraderie interrupted by humiliation and “outrageous” requests.

My feelings towards Owens during the performance were not unlike how I feel towards an unruly child in a grocery store. The most stirring emotions I had were anger and annoyance at the man behind me who lauded the nuance and finesse of Owens’ artistry as Owens strutted around, removing women’s garments, performing “force a sex act” instructions. When will the art world stop confusing hyper masculine displays of ego for art genius?

In this vein, I can see why Owens is such a successful figure. He delivers on the bravado of an artist as singular, commanding, devil-may-care author. His instruments are the audience’s heart rate, sweat glands and sense of indignity, but the range he plays is repetitively narrow. The notes, too, are basic: shock, discomfort, agitation, anger. Anything thrown at him is deflected immediately. Even while people move his body around for a performance written by Maren Hassinger, Owens performs unassailable autonomy. When he is embarrassed, he aims to humiliate. The ricochet is so automatic that the audience/performer dynamic stays still. Owens uses the context/support of the audience, but only to reflect his ego and how easily we learn to applaud it. Is anything else happening?

The benefit of this doubt seems officially granted on the grace of Owens’ behavior existing “as art.” Maybe he is acting out capitalism, capable of absorbing and profiting off any act of resistance? I almost wish so, but suspect the hype around Owens is just an expression of the assumption that the more antagonistic the interaction the more elevated the art.

I have no idea what Jörg Heiser thinks of Clifford Owens, but I think his quote applies in this case:

“…things that shock can, instead of being avant-garde, be utterly conventional: in the sense that they do nothing but provoke shock based on existing moral or juridical structure. Meanwhile, things that are applauded might be so for the wrong reasons—not for their innovative kernel but for their conventional shell.”

Unlike Shaun El C Leonardo (also in the Radical Presence lineup) who, in performing, expands on and reframes extant expressions of power, Owens sustains tension only to set it right back down where it always concludes. Is this really enough? When it doesn’t go anywhere but back to the most stereotypical of conquering swaggers?

Revolution is too dignified a word for what Owens does. Still, at the moment pictured below, just after Owens brushed past from backstage, I couldn’t help but think of Mierle Laderman Ukeles’ question as echoed by Shannon Jackson, “Who cleans up after?” 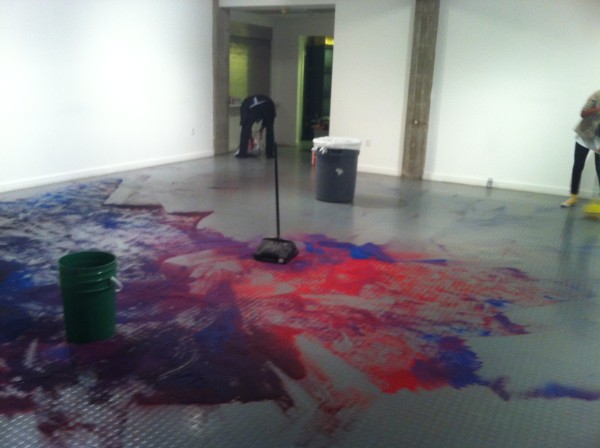 This article virtually confirms my suspicions of Owens, having viewed photographs of his performances, read others’ accounts and talked to a curator about him.

No, actually what this article truly confirms is exactly why nothing good takes place in HOUSTON. Why would any artist who has talent want to bring his work to this middle of no where ass backward place.

Do you mean, “Why would any artist want to bring his work to a place where he might receive criticism?” I found Schneider’s piece above a refreshing bit of critical brutality.

In terms of Modern and contemporary art this comment is pretty un-informed and puzzling. In many areas just due to the Menil , Houston’s collections are second only to Europe.

I am certainly no fan of Owens and I like this article but I have to say your post made me laugh.

So your argument is that Houston, the fourth largest city in the U.S., is “the middle of nowhere”?

Without really disagreeing with Carrie, I just have two things to add:

1. With so much totally un-informed “performance” art in Houston and beyond, the fact that Owens is at least historically informed and has a solid understanding of the field he works in is refreshing.

2. You can’t really have a performance series around an exhibition called ” Radical Presence: Black Performance in Contemporary Art” and not invite him.
So his work does make perfect sense in the framework of the exhibition.

Wow, is Houston such a small art town that this is even discussed? This all sounds like my grandmother’s sewing circle.

Clifford Owen is a no talent hack who passes of his narcissistic perversions as art. He sucks and so do all the idiot art students that go to who shows and participate in his borderline illegal pile of steaming feces.