‘A Better Yesterday’ at the Contemporary Arts Museum Houston 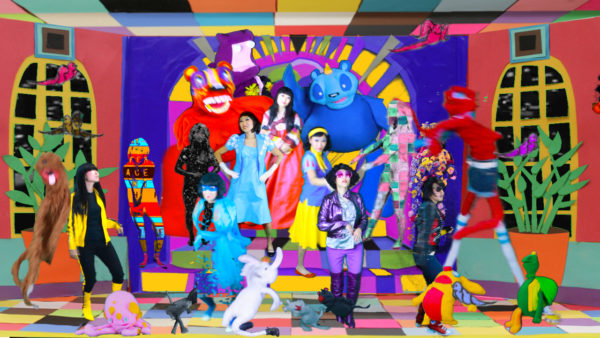 A Better Yesterday, curated by Bill Arning at the Contemporary Arts Museum Houston, consists of a trio of artists: JooYoung Choi, Jack Early, and Lily van der Stokker. Each artist’s work reflects on the past and they share some thematic similarities, but the exhibition is really three different shows.

All three artists have parts of their bios on the wall labels and exhibition materials. Choi’s biography links some details of her past to the narrative structure present in her current work: “Born in Korea and raised by adoptive parents in the U.S., Choi has explored the construction of identities throughout her career and has turned her focus to alternate realities.” Her constructed alternate reality is called the “Cosmic Womb,” and results in playful and imagined creatures appearing throughout her videos, sculpture, and paintings. Choi appears as different characters throughout, and her exhibition Somnioplexic Resonance opens with the question: “Why should the joy of imaginary playmates be denied to us as adults?” Choi’s work suggests adulthood as a new space where we can claim a joy that may have been denied us or was inaccessible in childhood. 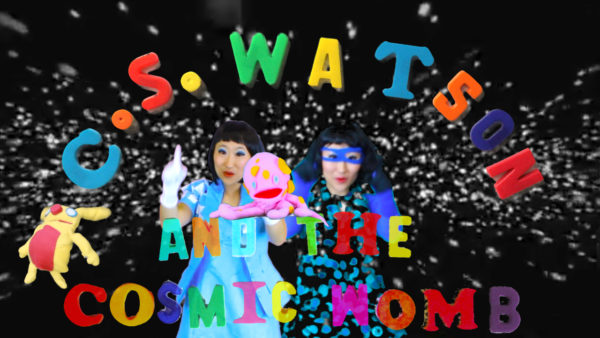 Choi’s work includes a colorful palette so densely packed with imagery that it may be hard to know where to begin exploring her show. Her video installation Paracosmic Viewing Station and Pleasure Vision Transmission Receiver quickly pulls viewer inside the Cosmic Womb. The video features C.S. Watson and the Cosmic Womb, and it evokes the kind of Saturday morning kids’ TV shows familiar to those born in the ‘80s—introducing the characters that populate the universe via characters played by Choi, animations, puppets, and found footage.  While mostly bright and playful, there is a darker undertone here, such as an abandoned child newsflash. These moments are interspersed with affirmative quotes from a variety of sources such as Rumi and L. Frank Baum. And a kind of motto— “Have Faith, For you Have Always Been Loved”—reappears throughout the video. The video ends with Choi herself building the installation we watch the video from, reminding the viewer that we’ve entered her constructed world. Characters such as Spacia Tanno, Putt-Putt, and others who appear in the video have their adventures documented in accompanying paintings. The video, paintings, and sculpture layer upon one another for an immersive experience. 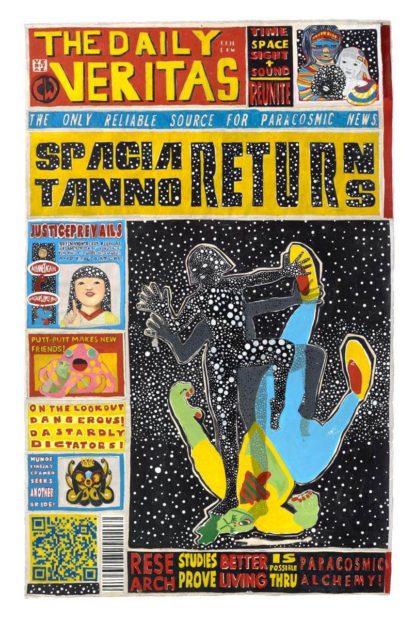 JooYoung Choi, The Daily Veritas – Stepping on the face of madness, 2015

Choi’s painting, Daily Veritas: Stepping on the Face of Madness (2015), heralds news of the Cosmic Womb. On unstretched canvas, newspaper headlines announce “Spacia Tanno Returns,” “Justice Prevails,” “Putt-Putt Makes New Friends!,” and features images such as Spacia Tanno defeating a monstrous green figure. These figures appear in another painting on the same wall, Somnioplexic Resonance (2017), and together they battle villains and the same creature, who in jeans and a Christmas sweatshirt appears like some sort of suburban mom monster. Her rage renders her face twisted and she rushes forward, with bolts of lightning bursting from her red painted fingertips. In the painting, so richly detailed and featuring many figures, Spacia Tanno battles this frightening figure (along with some help from her friends), while a handcuffed astronaut in a yellow space suit, Amplexus, looks on. He reappears in the upper part of the painting asleep (his bed chained) along with a young girl, also asleep in a different bed. The whole background of the work seems to be the body of Spacia Tanno; it’s as if she is the whole universe and simultaneously a dreamscape. The canvas itself (a kind of proxy for our view into the Cosmic Womb) has been ruptured as Spacia Tanno pulls it up to reveal and rescue Amplexus. Multiple figures who appear to be Spacia Tanno fill the work, creating a dynamic action sequence—frenetic and forceful. The stakes are high. 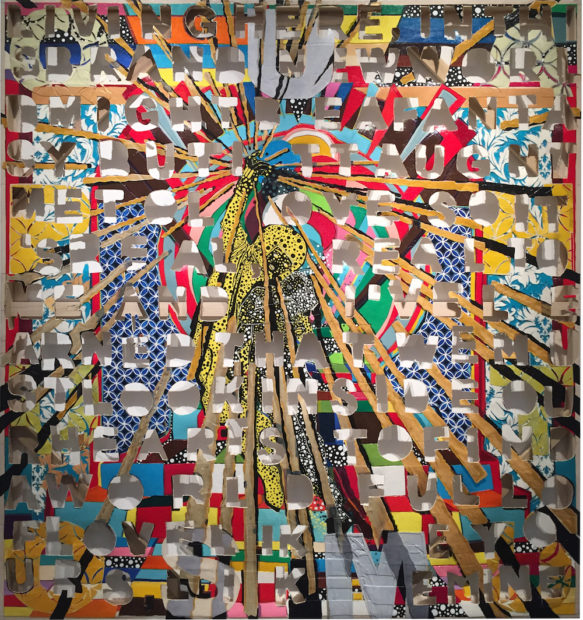 JooYoung Choi , Quantum Soup—Spacia and Amplexus: All There Is That Is Real Is the Friendship That Two Can Share, 2016

There is a loving fierceness to the Cosmic Womb. The declaration of reclaiming one’s present to triumph over the past resonates in Choi’s work here, and while on the one hand it’s deeply personal, it’s still generously open to the viewer. Choi’s part of the show culminates with the sculptural installation Time for You and Joy to Get Acquainted (2017). Two figures, Spacia Tanno and Amplexus, sit on a brontosaurus covered with flowers in a lush green space. The smiling brontosaurus’s arches her neck over the two figures while they get acquainted and possibly fall in love. Don’t be fooled by the bright colors or felt sculpture’s softness; the heroines that populate Choi’s work at CAMH are tough, and joy is hard-won in the Cosmic Womb. 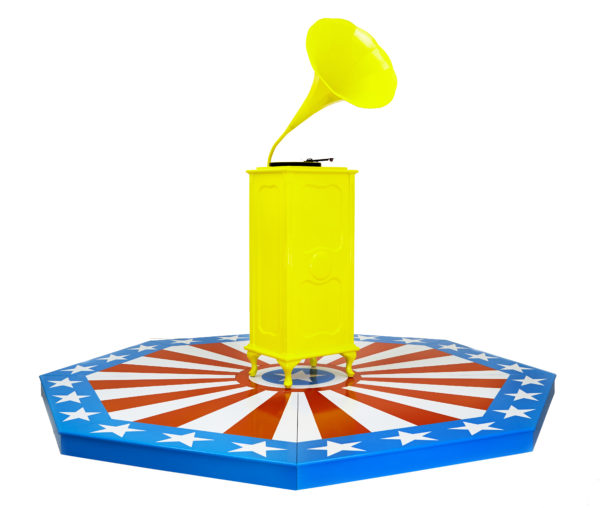 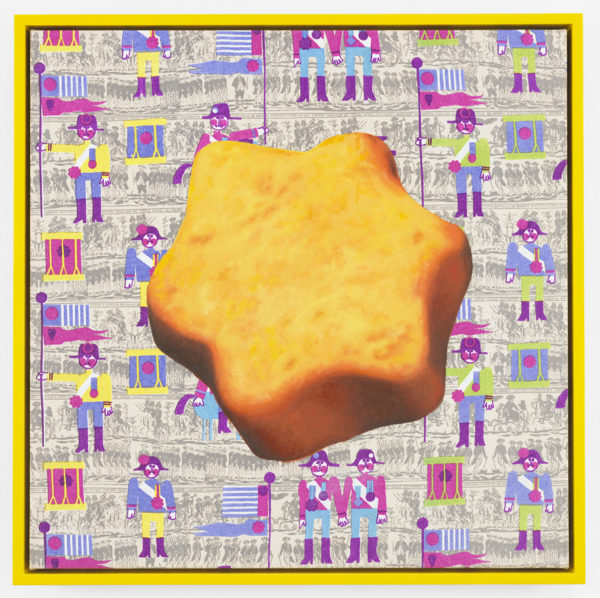 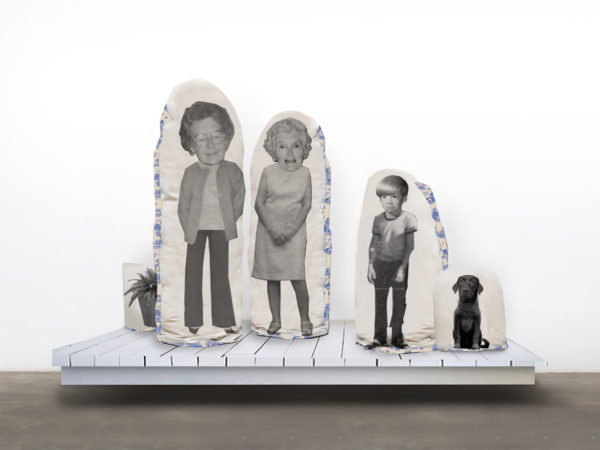 Jack Early’s installation also mines the artist’s biography. The exhibition materials state “Jack Early’s childhood in the South is fundamental to the explorations of identity, sexuality, and masculinity in his work.” His sound piece (coming through a record player with vaudevillian flair) details, as the title states: Jack Early’s Life in Just Under 20 Minutes. Early describes his experiences as a gay boy in the South through his successes, and some disappointments, as an adult.  (The amplification of that piece over Choi’s video sound also lent it an assertive showman quality. It was difficult to hear Choi’s piece if Early’s was being played.) Paintings such as Sock Jock (which emphasizes a large male foot and inner thighs) and Man Boobs (focusing on the hairy muscular chest of a mustached guy) emphasize an eroticized attention to the male body. The backgrounds of these paintings feature illustrations of soldiers similar to Early’s childhood bedroom wallpaper; it’s been modified so that some of the soldiers are holding hands. The paintings are exquisitely made. Another work, Maudie, Aunt Lib, Jack, and Bernice on the Front Porch (2017), features the title’s named figures as canvas oblong lumps on a porch-like structure. The sculptures appear ready to be knocked down like a child’s game and it is difficult to read young Jack as “happy” in this piece. 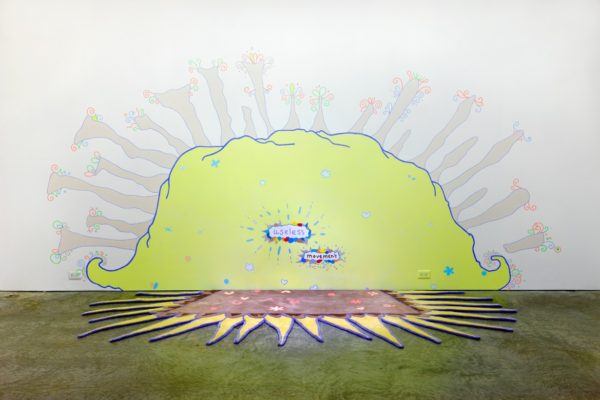 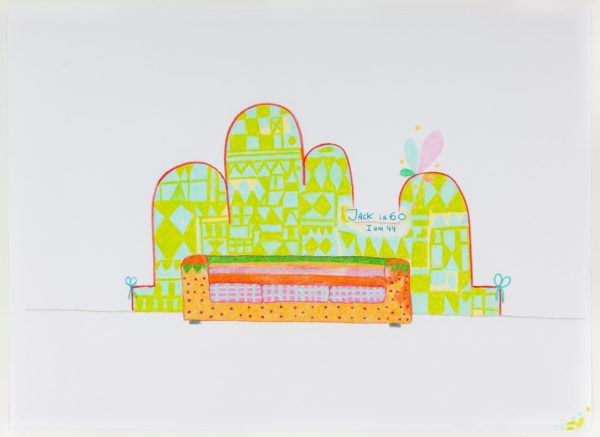 Lily van der Stokker’s work shares a similar color palette and Pop tone with Early’s work, but her work focuses on the death of her partner. It’s the sparest of the three installations, and therefore a bit of an outlier. Unlike van der Stokker, Choi and Early look toward childhood, which give those two some shared curatorial strata. But my recommendation is that you don’t miss JooYoung Choi’s Somnioplexic Resonance. It’s beautiful, complex, and rewarding.

At the Contemporary Arts Museum Houston through Sept. 3, 2017.