by Carrie Marie Schneider May 20, 2011
FacebookTwitterEmail

In terms of size, concrete and consumer culture, Houston is a hyperbole of a city. Every time I return to it from another place I am shocked at the exorbitant much-ness of Houston. Somehow, though, Houston is also a hub of visionary art made from recycled materials and an especially fascinating place to look for examples of creative reuse.

I grew up with the idea of gleaning as a way of creatively redistributing wealth. From the time I can remember, my Dad’s house included a “loot room” filled with kites, pillows, endless shampoo, crackers, batteries, household appliances of all forms and every item ever sold on a late night infomercial. In the hands of my Dad, an almost religious dumpster diver, day old food, returned, rebranded, and off season products, find new use in shelters and halfway houses throughout Houston. He grew up poor in Devine, Texas, and although now a successful oilman, he still can’t stand to see anything at all go to waste. My favorite example is the roller skate wheels he uses as drive wheels for his bike engine business, Bike Bug, which redesigns lawnmower engines from the 70s to meet the needs of environmental and cost conscious commuters today. 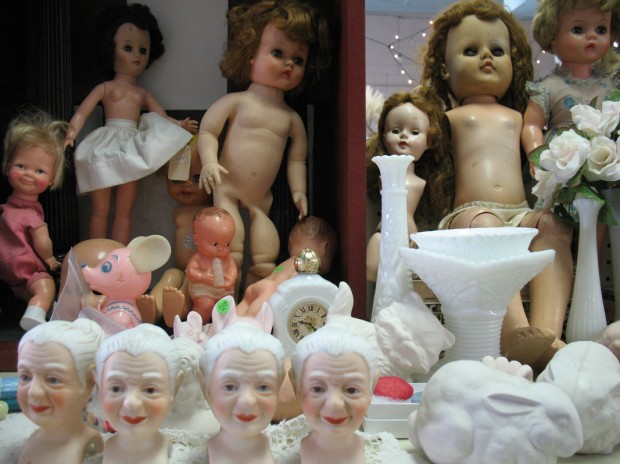 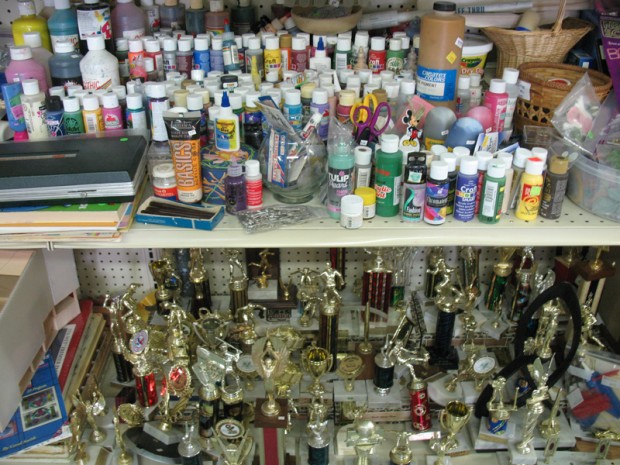 In addition to being “Part craft store, part thrift store, part antique shop and part salvage yard,” the Texas Art Asylum offers a varying inventory of cool stuff for creative reuse. It also houses The Center for Recycled Art and provides “no- or low-cost reusable materials to educators and other nonprofits” as well as hosting recycled art making activities with youth in the Greater Houston area. Since their opening only a year ago, they have helped divert more than eight tons of material from Houston’s landfills. The Texas Art Asylum is also the founding member of the Texas Chapter of the Reuse Alliance and will be publishing a directory of reuse resources in Houston this summer. 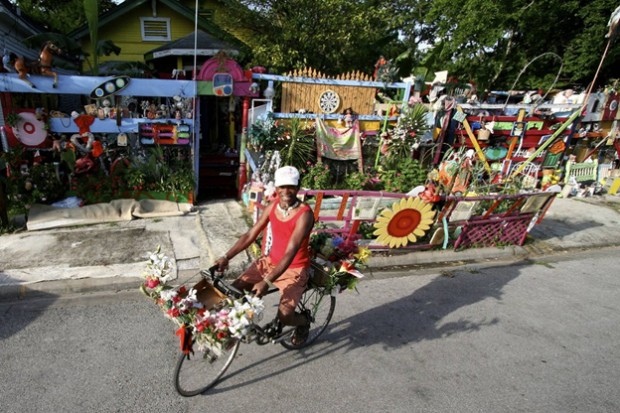 3. The Flower Man
Cleveland Turner is a true Houston legend, inspired to create by a vision he saw on what became his last night of alcoholism. Using brightly colored consumer cast-offs – everything from plastic flowers to oompa-loompa dolls to ceramic bric-a-brac – Turner has turned his Third Ward home into an ever-evolving wonderland. He is so beloved that a group of volunteers rushed to help repair his house when it was damaged by Hurricane Ike. In addition to presenting a satellite flower house on the lawn of Houston’s Contemporary Art Museum during the No Zoning show last Summer, Turner is featured in Roadside America. If you have not visited the Flower Man and his amazing house, do yourself a favor and take the trip. 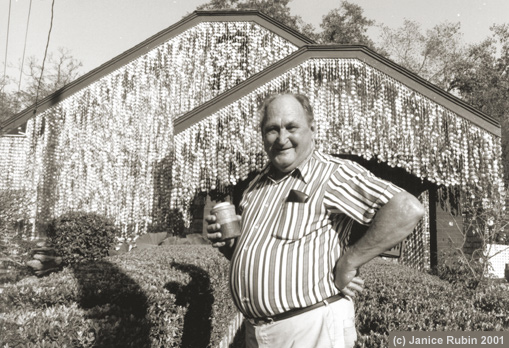 Well The Flower Man has company in Houston when it comes to the Lord commanding massive collage projects with one’s home as canvas. In the words of John Milkovisch, creator of The Beer Can House, “the good Lord says ‘Nut, it’s time for you to build this crazy stuff, so here I did, I built it.'”

An 18-year creation by Milkovisch, a retired upholsterer for the Southern Pacific Railroad, The Beer Can House is comprised of over 50,000 beer cans (as estimated by Ripley’s Believe It Or Not). It has been restored by the Orange Show Center for Visionary Art. To me, the most magical thing about the 222 Malone Street house is the eerie, unexpected music it makes on even a slightly windy day.

“Some people say this is sculpture but I didn’t go to no expensive school to get these crazy notions.”-John Milkovisch

5. Experimental Musicians
It’s not just visual artists who are using the stuff around them to make their work; musicians in Houston’s rich experimental music scene are finding and using all sorts of unlikely sound sources. 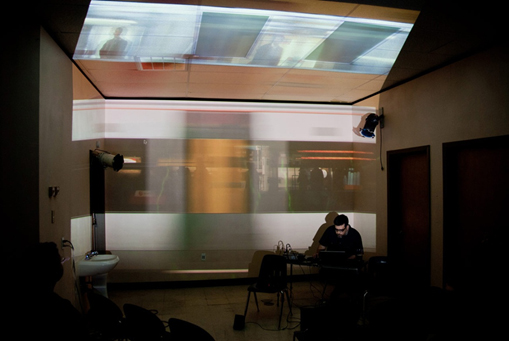 You can listen to Carlos Pozo’s  “Garage Dreamhouse” here. To create the piece, Pozo explains, “ … I used the garage door, the sound of rolling the trash can to the corner, and other sounds I grabbed just by putting the recorder on a window sill, or doing something as banal as opening and closing a sliding door or a kitchen drawer full of cutlery…each found sound is unique – which is what I like.” 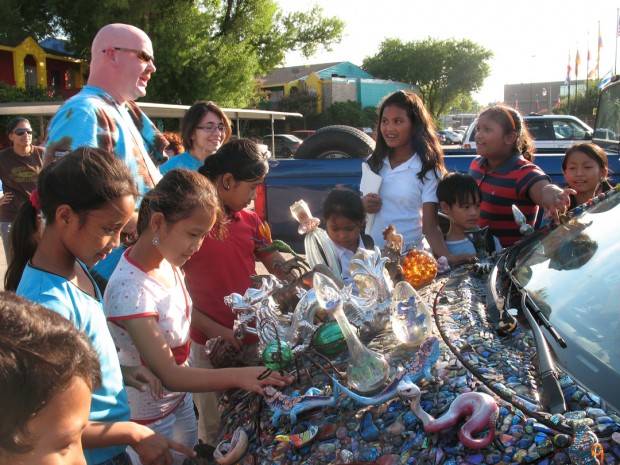 Houstonites have not only recycled the city’s dominant mode of transportation as art, but they’ve used recycled materials to do it. Here is a short list of materials that have shown up on art cars, though it will be much more exciting to go watch the real thing at this year’s Art Car Parade, May 22nd! Or, visit the ArtCar Museum.

7. Melanie Schlossberg and her great uncle 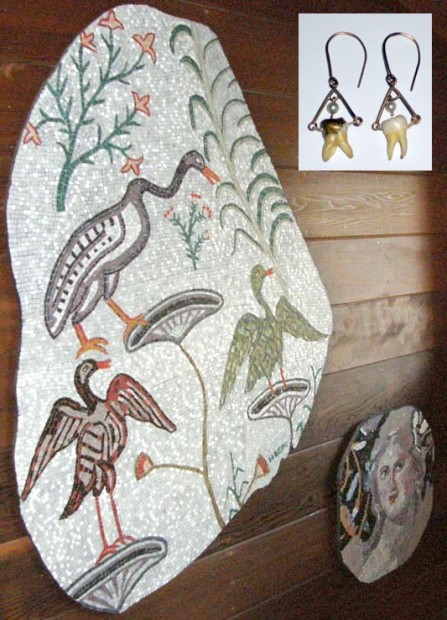 One thing not on that list, yet, is teeth. Melanie Schlossberg, however, has that covered. Schlossberg is a local multimedia artist who creates “creaturely” objects out of found, salvaged and raw materials.  Most notable is her use of teeth – both genuine and false – in her works.  According to Melanie her use of teeth in art is a family tradition that began with her great uncle Dr. Harold Berg (1918 – 2002).  General surgeon by day, mosaic artist by night, Harold started placing one tooth in each artwork when his eldest child lost her first tooth. After his family ran out of baby teeth, he used donations from his community in Louisville, Kentucky– where he also donated most of his pieces to community centers, schools and universities. His works ranged from classical motifs, as pictured, to portraits, to Holocaust memorials. Melanie first continued the tradition with her pieces Wisdom Teeth Earrings (1992) and Tooth Fairy (2005). 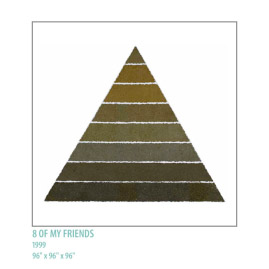 Wayne Gilbert is another artist creating beauty from the body. Gilbert makes paintings from the remains of the deceased, using the unique tones of each individual’s cremains as his palette. He uses both unclaimed ashes from funeral homes and those willed to him, such as photographer Susie Paul was memorialized in a piece entitled Homage to Photography. 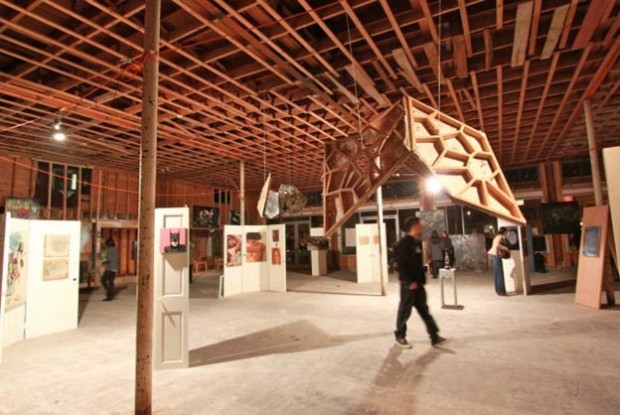 The Brayer Room is a pop up art space that finds its home in empty and unexpected spaces around town. Its latest incarnation appeared at what used to be a convenience store at 214 Fairview and featured works of art hung on 22 discarded doors, a bar made from two toilets placed back to back with a door on top, and a porcelain claw foot bath tub as beer cooler.

Founder Esther Gutstein explains, “When I take over a space I try to focus on what the space already is,” responding to it with “the creative re-use of expendable objects.”

As a proposed example of how creative reuse might expand in Houston, I nominate Double Happiness by Mésarchitecture. Imagine I-45 if we transformed all the billboard frames into a functioning swingsets. 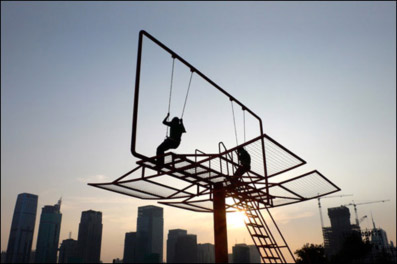 Past, present, and future, Houston is an overabundant city that inspires its inhabitants to creative reuse. Susanne Theis, former executive director of Houston’s own Orange Show Center for Visionary Art, has asked and answered the definitive question:

“Why Houston? Lack of zoning and yearlong temperate weather help explain some of this creative activity, but more important is a shared attitude that permits and perhaps encourages eccentric and visionary feats. This attitude is evident in the very founding of the city on the mosquito-infested banks of Buffalo Bayou and finds expression in figures that we use to identify ourselves: the cowboy, oil wildcatter, and astronaut. It evolved through the clash of cultures wrought by geography and history, drawing on the intellectual and aesthetic traditions of the South, the West, and Mexico.”

For a poetic look at gleaners throughout art history and up to the present, I highly recommend The Gleaners and I by Agnes Varda.
http://www.youtube.com/watch?v=aKgjjEJvMbM

Open Call for Artists to Work with New...

Like the way you’ve summed up Houston artist’s use of junk and scavenged materials. See ArtfulInterventions1002WashingtonAven.blogspot.com for Dean Ruck and Dan Havel’s assemblage.

Harry, this link is in the article as well, it’s just hard to see.

Great article! Houston provides such a great opportunity for art and environmentalism to unite. You can catch some of Houston’s most talented re-use and re-cycle artists the 3rd Saturday of the month at the Houston Re-Market.