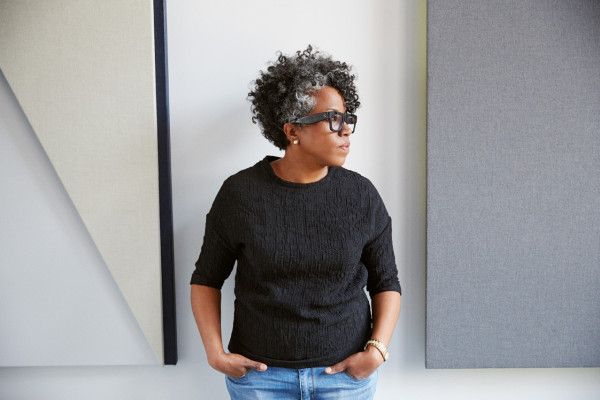 Sleek, sexy, and unapologetically modern: Walking into Jennie C. Jones’ mid-career survey at the Contemporary Arts Museum Houston feels a lot like being transported to the set of Mad Men. And I don’t think it’s solely because of the blocky, single-colored paintings and drawings Jones employs to call back to that period. Rather, an experiential theatricality is heightened and punctuated in that both Jones and curator Valerie Cassel Oliver treat the entire survey as a single installation, as opposed to discrete bodies of works.

Although subtle, within a few minutes one can hear sound emanating from speakers overhead. A white noise that occasionally skips and falters, it bathes and suffocates the works below in kind of grating, soothing fuzz. What’s really interesting is that there is no title card for this sound (at least not one I could find); we viewers take in the sound not as its own piece, but instead as a moving presence in the space that funnels its way down to each individual work, and it changes and challenges what every painting, drawing, and sculpture was originally intended to be. This is how Jones and Cassel Oliver reframe the work in the show, and thus our viewing experience: it’s not about which individual work is most effective formally, but rather, which work functions as the most effective conduit for the sound. 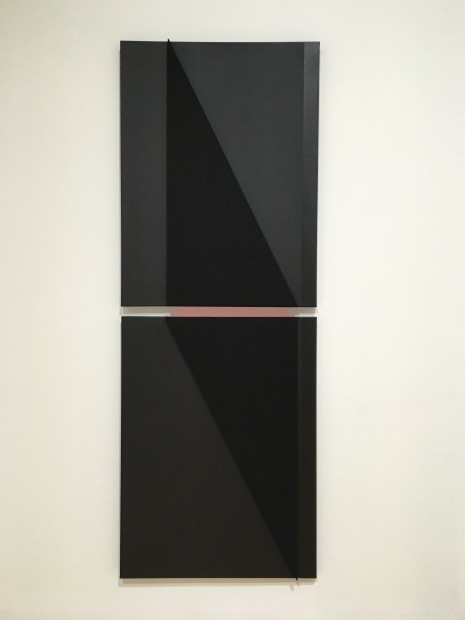 The easiest answer would be the monochromatic paintings. These also most clearly reconstitute the tenets of modernism, and this is most true with Jones’ Vertical into Decrescendo (dark) (2014), as she Ad Reinhardts her way into a clever subversion of his work while reclaiming and infusing an alternative notion of blackness, and the sculptural inclusion of acoustic absorber panels materially engages with the sound as it, like some innocuous black hole, absorbs it. As gratifying as these monochromes are to look at, they’re also the most literal, and we walk away feeling like we solved a fairly easy equation, as opposed to enjoying the fraught questions and histories Jones is known for tackling. 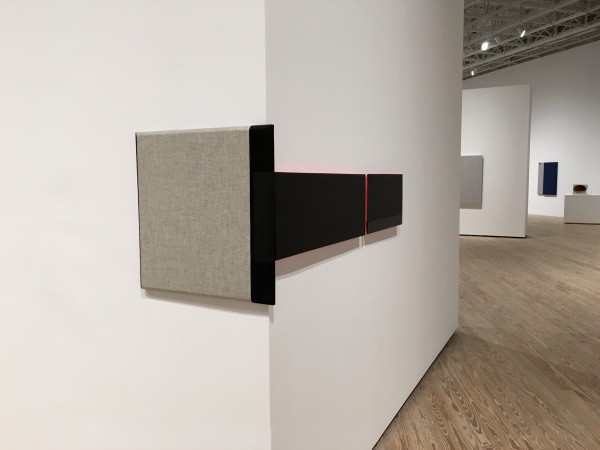 More poignant and effective are the sculpture/paintings like Sustained Black with Broken Time and Undertone (2011) that hug and slide around a corner, pieces that suggest a continuation of line while also engaging the architecture and squeezing the walls like a vice. This is where the questions—both formally and conceptually—start to feel richer and deeper, and where we more directly feel the simultaneity of expansion and constriction that recurs in so much of Jones’ work. 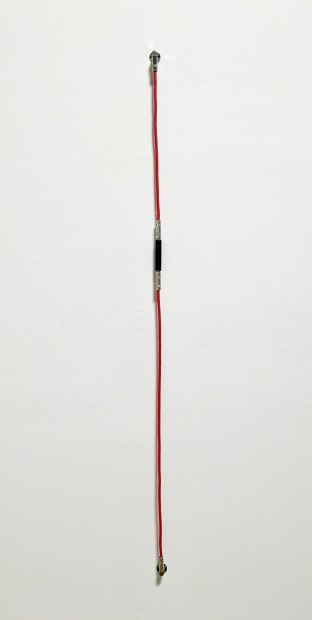 But nothing compares to the smallest series, smartly placed front and center of the show: the SHHH, The Red Series (all 2014). These sculptural drawings are made up of noise-canceling instrument cables, with each of the three bookended by endpin jacks that read like suction cups as much as they do fixtures to the wall. And this is how Jones manifests not only a conduit for sound but also stealthy history navigation, as the wall they’re attached to becomes part of the artwork and also comes into play as a monumental, architectural, minimalist vacuum from which the cables continually suck from and feed. The red cables are effectively a sonic and material channel, the small intestines devouring and regurgitating modernist tropes while telling their own story as contemporary and even anthropomorphic objects. 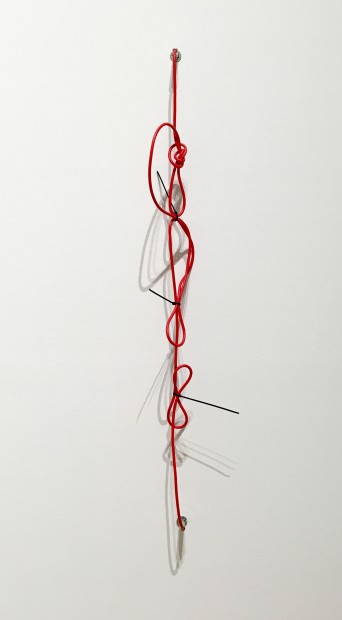 SHHH, The Red Series #1 drapes and nourishes like an umbilical cord. SHHH, The Red Series #2 coils, bound by flagrant cable ties not only pointing accusingly at the viewer, but also back at the work itself in self-blame. Most riveting is SHHH, The Red Series #3, which winds with abandon and conviction as it’s choked by at least a dozen truncated cable ties riveting down the line like a spinal column. It is important to note that while, yes, the white wall references minimalism, the void, and Rauschenberg’s white paintings, the tubing reconstitutes proto-feminist ideologies a la Eva Hesse with both material and line. 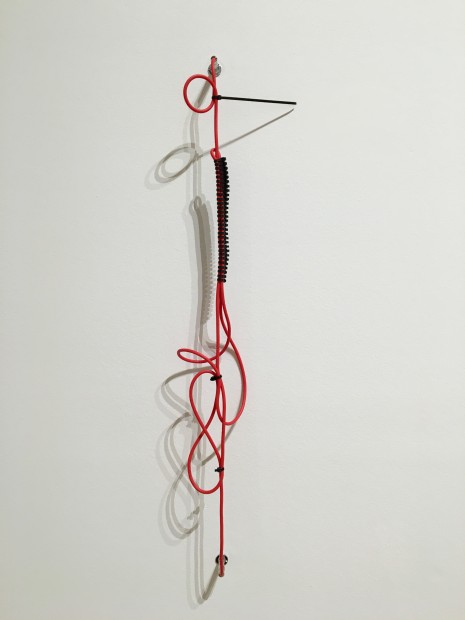 It’s also important to note the sound room, a modest space surrounded by a black, billowing theater curtain with a lush, fat, elliptical wooden bench parked confidently in the middle—an installation unto itself that feels both quaint and epic. Here Jones plays a 30-minute loop of several short sound pieces, and it is here again where, by her way of cutting, slicing, remixing, and extending previously existing sound clips, we’re (delightfully) caught on a stuttering plateau of endless expansion. Particularly heart-wrenching is What a Little Moonlight (2007), where Jones repeats and overlaps the same note of a woman singing in a kind of shivering run that feels somewhere between a conversation and a howl. Its repetition pounds like a pulse, as if the woman singing is sitting right there with us, whispering into our ear, and disappearing like an apparition.

Jennie C. Jones: Compilation is on view at the Contemporary Arts Museum Houston until March 27, 2016.