Go to the CAMH: It’s Time for a Good Laugh 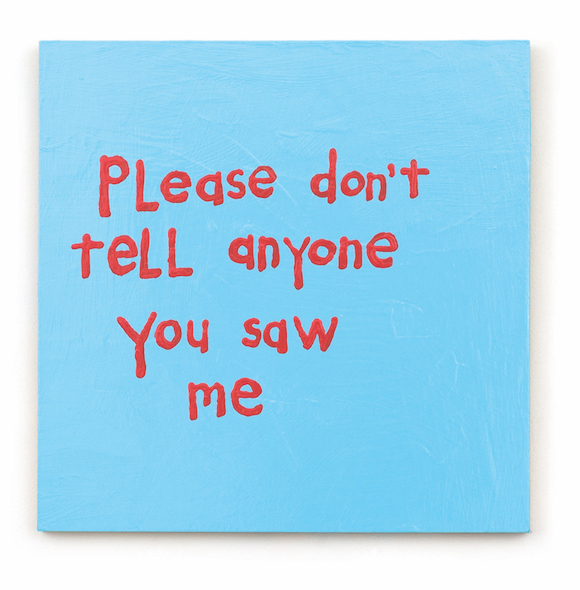 Cary Leibowitz, Please Don’t Tell Anyone You Saw Me, 2016, Latex paint on wood panel. Courtesy of the artist and INVISIBLE-EXPORTS via icaphila.org

Cary Leibowitz: The Museum Show is up at the Contemporary Arts Museum Houston (CAMH) through August 26. The Houston Chronicle describes as the exhibition as “the funniest thing in a Houston museum this summer, as frothy on the surface as cotton candy. But also heartbreakingly sad, a riot of self-deprecating humor from a gay and Jewish perspective that explores raw truths about self-loathing, depression, gender differences and identity.”

If that all sounds hilarious to you, make sure to drop in to the CAMH on Thursday evening, July 12, at 6:30pm for a comedy show hosted by Houston comedy scene regulars Dusti Rhodes and Nick Meriwether. The descriptions of Rhodes and Meriwether:

Dusti Rhodes uses her experience as a former ugly kid, journalist, awkward adult, and teacher to bring a unique and highly personal comedic performance to the stage. She has done stand up throughout the country including being featured on Free Press Summer Fest, Whatever Fest, and Come and Take It Comedy Take Over. She has opened for acts such as Janeane Garafalo, Michael Che, and Demetri Martin. Dusti runs the Rudyard’s Comedy Open Mic (named Best Open Mic by Houston Press) and hosts the Houston chapter of The Moth StorySLAM. Occasionally, she sleeps.

Nick Meriwether is an artist, writer and comedian based in Houston, Texas. He produces several shows a year under the name Character Menu, and is the co-host of the monthly show ‘Hot Takes’ at The Secret Group. He has performed at multiple comedy festivals including Whatever Fest, Hell Yes Fest, and Come and Take It Comedy Takeover.

Other comedians, some of whom are mined from the Houston visual arts scene, are Katie McGee, Bob Morrissey, Emily Peacock, Victor Tran, Drew Hollway, Jaffer Khan, Keisha Hunt, Dale Cheesman, and Andy Huggins. That may sound like a huge lineup, but the event is expected to be finished by 7:45. Check out the exhibition and the comedians. Sometimes, artists can be pretty funny.