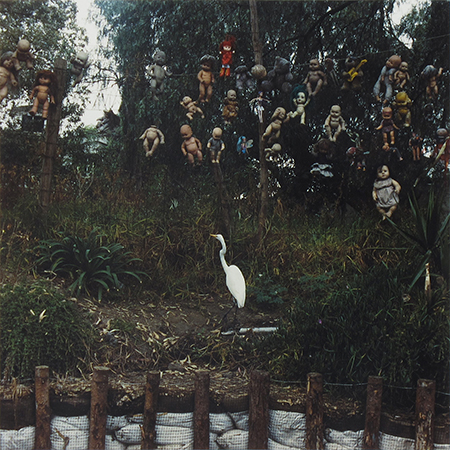 The common assumption that prevents many viewers from understanding photography as art is that it is a given. The belief is that, with the click of a button, a machine pointed in a direction manufactures an image. None of Amy Blakemore’s images are given. Her machine can’t point itself. The appearance of her photographs— their subjects, scale, value, color palette and composition—are crafted out of an image on film that would look completely different in the hands of a different artist. No, they wouldn’t look different; they wouldn’t exist. Rigorous, personalized photography like Blakemore’s could not be more important than it is today. Change has happened so quickly and with so much misplaced enthusiasm that we’ve failed to grasp the fact that, as a society, we have given Apple and Facebook complete authority over our photographic representation. We are no longer in control of how our world appears.

All of the pictures in Blakemore’s exhibition, People, Cars and Buildings, Sculptures, Flowers and Junk, curated by Dean Daderko and currently on view at the Contemporary Arts Museum Houston are printed from film in a darkroom. Blakemore is specific about her materials. For many years she used a Diana camera. In 2010 she began using a Robot Royal. Both cameras were in their widest popular use during Blakemore’s years as a child and young adult. The implications of a change in an artist’s process are very important. A photographer’s camera is like a draughtsman’s pencil or a painter’s brush and palette. It’s the tool through which thought is conveyed. 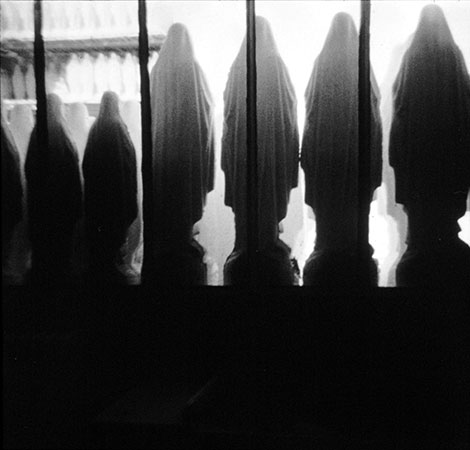 The Diana was manufactured in China during the 1960s and was sold in the United States as a novelty camera. Manufacture of the Diana and its variants came to an end sometime in the ’70s. It’s prone to light leaks, double exposures and any other kind of malfunction you can imagine a toy camera experiencing. Was the Diana Blakemore’s first camera? It must have been the first camera for many young photographers.

The Diana was a vernacular camera, used to give form to the imaginations of children, document the rituals of stoned teenagers and record tense Christmas dinners. How many Diana pictures are packed into cardboard boxes and hidden in closets throughout the Midwest, where Blakemore was born? Hundreds of thousands? In 1971, when Blakemore would have been 13, Popular Photography published a story by Elizabeth Truxell titled $1 Toy Teaches Photography. The article describes the use of the Diana in undergraduate and graduate photography programs at Ohio University.

There’s useful irony in the fact that, in a 21st-century culture totally immersed in digital photographic surveillance, Blakemore switched from the dark, proletarian nostalgia of the Diana to the clockwork precision of the Robot, a camera used extensively in 20th-century political surveillance. The German army used early incarnations of the Robot during WWII. It was the gun camera, triggered by the firing of airplane artillery, for the German Luftwaffe. Later models were also used in surveillance and espionage during the Cold War. The manufacturer, Otto Berning and Co., eventually turned to the production of surveillance and security cameras and is now called ROBOT Visual Systems GmbH.

Materials are only as good as the artist using them. Blakemore is the department head of photography at The Museum of Fine Art’s Glassell School where she has taught darkroom photography for 26 years. For a real artist there is no such thing as the accident. When the unexpected occurs, it’s observed and judged. The visual artist has to remain vigilant. Is the slight angle in framing caused by a hiccup or a gust of wind appropriate to this image after all? 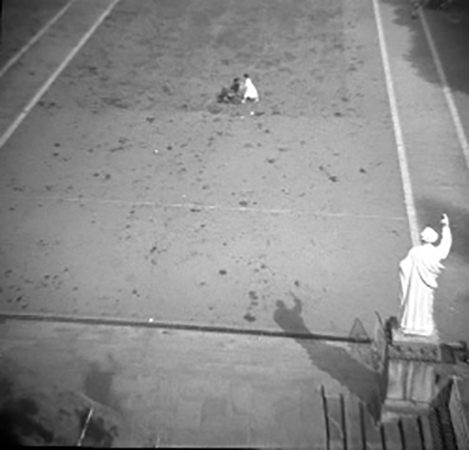 In Plaza, the artist must ask if the tiny white figure of what seems to be a nurse, pushing a man in a wheelchair while a classical sculptural figure raises its finger in judgment, is bright enough. Should the photographic paper be exposed to more or less light? Are the chemicals in the processing bath balanced? Blakemore makes the tiny duo in Plaza the focus of the picture by situating them high and in the center of the image. We see them before we see the much larger robed saint or senator scolding them from the bottom right corner of the frame. When we finally see this ghost of Antiquity we can imagine him casting them out of the picture. “Go, get out!” he seems to say as they roll out of frame left. 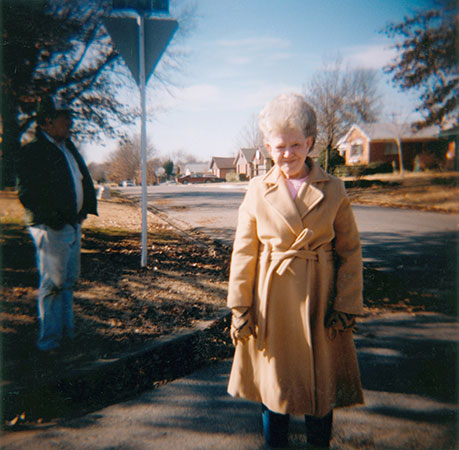 Even if Blakemore’s pictures are intensively processed, much of her imagery is captured quickly. In Patrick, a young man pops up from the water at the edge of a swimming pool, overwhelming the Diana’s limited focus capability. The blurred image allows us to see the handsome young man as if through water or the distortion of the sun’s heat. In Miss Goodner, Blakemore looks into the eyes of one of the forgotten human beings who live on the ground, outside of cosmopolitan time, in flyover country. And Factory, with its window full of mass-produced Madonnas who’ve turned their backs on us, suggests that redemption cannot be commodified. But these are my stories, not Blakemore’s. What’s her intent? Why has she made these pictures?

The artist’s job is not to pass messages; it’s to communicate meaning. Most of the time good artists don’t quite know what their work means. They have ideas. But ideas can lead to unexpected meaning. An artist is responsible for knowing their materials and having a point of view. This combination, whether the point of view is known or kept secret, leads to intentionality. At its best intentionality offers meaning while withholding explanation. Blakemore’s pictures are completely intentional but ambiguous. The viewer has no choice but to search for meaning or walk away.

The trouble with science fiction is that it usually understands reality in precisely the wrong way. Too often it envisions a strangely transformed physical world in which we exist as we do now, with our present-day perceptions and motivations. But it isn’t the world around us that becomes disoriented. It’s the world inside us that loses equilibrium. We are controlled by our perception of our environment. Deep, well-crafted, personal imagery like Blakemore’s doesn’t stand a chance in the maelstrom of visual garbage that has made us blind even as we swim in a sea of ever-multiplying images. But I like lost causes. With a quick click and long hours in a dark room, Blakemore sees for us. We just have to look. And think. And feel.

Through Nov. 27 at the Contemporary Arts Museum Houston.