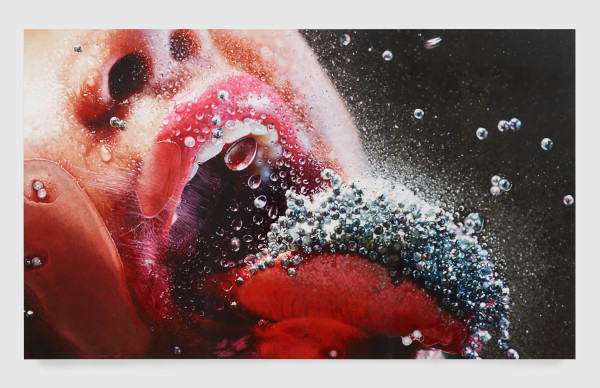 In 1969, when Marilyn Minter was 20 or so and a junior at the University of Florida at Gainesville, she took a series of photographs of her mother, Honora Elizabeth Laskey Minter. To Marilyn and her brothers, their mom was just that; their mom, but she was also a drug addict, who rarely left home, and spent most of her days in a nightgown, smoking while lying on the couch or in bed. One routine she adhered to with a vengeance was an all-out offensive directed towards the ravages of time: rolling what little hair she hadn’t twisted and broken off, dying her eyebrows, putting on makeup, tying the neck of her nightgown just so, in a pathos-ridden attempt to hold on to her former beauty, and to level the playing field between herself and her husband’s teenage girlfriends. As the story goes, and which you probably all know by now, when Minter showed the contact sheets of these to her classmates and the department’s Visiting Artist, Diane Arbus (say that three times in a row), Arbus most heartily approved, whereas the students didn’t. They were horrified that the woman in the photographs could be anybody’s mom. 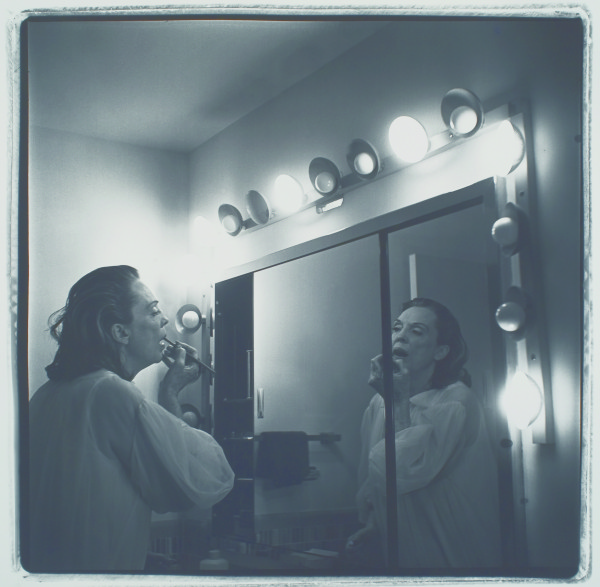 These photographs, which weren’t shown for another 25 years, form part of the retrospective of Minter’s work in Marilyn Minter: Pretty/Dirty, now on view at the Contemporary Art Museum Houston until August 2. The exhibition, a co-production of CAMH and the Museum of Contemporary Art Denver, features over 40 years of work, including videos, photographs and paintings. I have to be honest, and I’ll probably be crucified by every artist in the world for admitting this, but I wasn’t that familiar with Minter’s work before seeing the show. Without knowing anything about her, the photographs of her mother —The Coral Ridge Towers series— were for me a perfect introduction to the artist’s work. In “Mom Making Up,” her mother stands in front of a makeup mirror (with more than half of its lightbulbs burned out, probably never to be replaced) holding her mouth open to apply a fortification of lipstick. The heavily lipsticked open-mouth motif will appear again and again in Minter’s work throughout the years, in women (and men) performing fellatio, drooling paint, licking caviar off of plates of glass, and sucking on jewels. It will be mirrored in images of vaginas or vagina-like images, such as in Minter’s 1989-90 100 Food Porn series, where hands perform the seemingly mundane task of food preparation, but with hyper-sexualized intent, and in “Chiaroscuro” (1991) and “White Cotton Panties” (1992), where you see the real thing, or rather as Magritte would say, paintings of the real thing since in reality Ceci n’est pas un vagin. 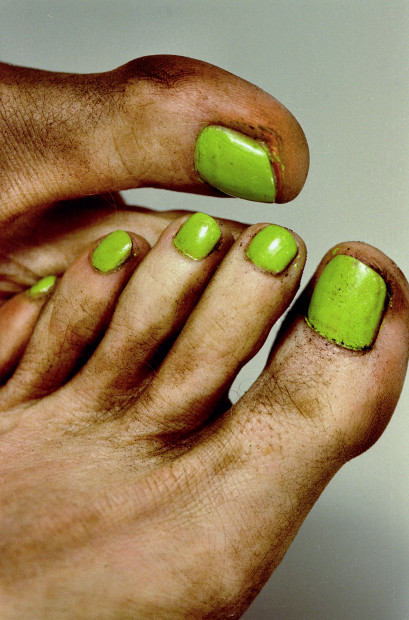 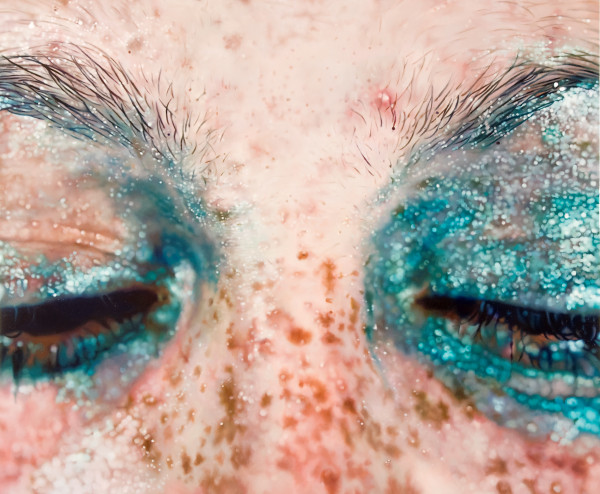 There is another Coral Ridge Tower photograph (“Mom in Negligee”) that further shines a light on the later works of Minter. Again it features her mother in the mirror, a mirror that couldn’t have come from anywhere but 1960s Florida, a mirror that looks like the frame is made of plaster cock tails; not a cocktail that you would drink, but the tail of a cock. The mother stands looking at her reflection with clear, palatable desire for that SELF she imagines she must be. In this image, low-watt bulbs shine from below and behind, making Honora look younger than ever, but also making her look like she’s on the set of a mash-up scene from What Ever Happened to Baby Jane, Madonna’s The Next Best Thing, and H.R. Muff and Stuff.  In this and other works, Minter zeroes in on what we humans try to hide, whether it be a sagging jaw, dirty floor or a dirty mind. A blatantly wonderful example of this is the artist’s enamel-on-metal series Beauty, which derives its name from a particular kind of fashion spread featuring close-ups of faces, eyes, lips, nails and décolletage. Minter gives us the outtakes of a commercial shoot of supposedly perfect models: sprouting armpit hair (“Pit,” 2004); dirty feet (“Dirty Heel,” 2008; “Soiled,” 2000), greasy whiteheads, and God forbid, freckles (“Blue Poles,” 2007). 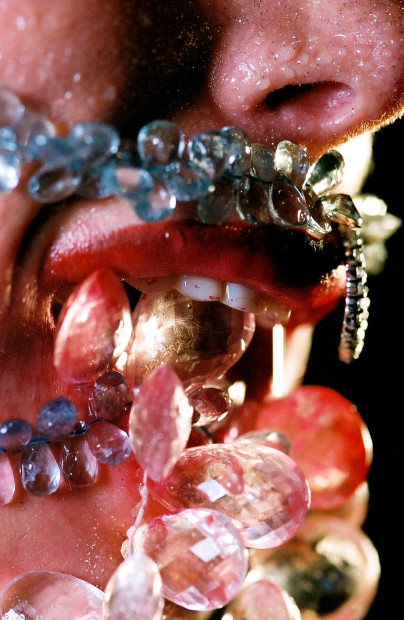 In the section of the CAM entitled Wet, we are treated to what feels like an all-nighter fueled by an excessive intake of ecstasy and coke. You start out having fun, you imagine there is no one sexier than you are, and then hours later you’re crying blood, and you want to make it all stop. Wet is a place where you try to cram as many sexual metaphors into your mouth as you can. In the video “Green Pink Caviar” and in beautifully executed large scale paintings such as “Orange Crush” (2009) and “Pop Rocks” (2009), we see what look like women’s or men’s or moray eels’ Juvédermed© mouths and tongues pressed up against glass, licking and sucking up a bunch of luridly colored, gelatinous, caviar-looking shit. The play at sexual and fashion-derived excess is pushed even further in C-prints of people’s bejeweled and be-glittered encrusted faces chomping and slurping on semi-precious stones and gold paint, and in the sea of silver ejaculent raining down on the feet in the fuck-me designer heels in the “Kicksilver,” from 2009. (But not in the painting of the baby, because that would be creepy.) 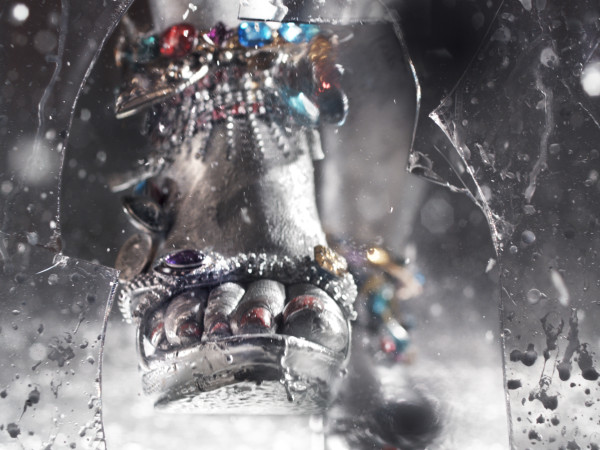 After Wet, you stumble into a section called Glazed, where again you are confronted by silver-drenched, jewel-jangling shoes, in both the painting “Not in These Shoes,” (2013) and the 2014 video “Smash.” In these two works the shoes are wrought menacingly large, opened-toed, high-heeled and brandishing blood-red nails. “Smash” is kind of silly, although I enjoyed it enough to watch the entire film, with its angry model’s feet splashing around in that repeating motif of silver paint, and kicking through plates of glass. We all know that high-heeled shoes are meant to stand for so many other things: a symbol of sexual dominance and submission, and a long-held indicator of wealth. (In 16th-century Holland, the more money you had, the higher the shoes. If you were really wealthy, you could afford a pair of shoes so high, that you couldn’t walk on your own, and needed the assistance of two servants, which in turn further cemented your status.)

The use of the term Glazed itself is either meant to describe your eyes after so much superfluity, or refers to Minter’s method of creating her paintings: she Photoshops composite imagery under broken or wet glass, and then executes the end result onto metal sheets by building up thin layers of paint, one on top of the other, with the final varnish applied with fingertips. These are beautiful paintings; some people in fact have complained that they are too beautiful, but there is something underlying their glitzy glamour that puts the stink of death on them, which balances things out. They remind me of high glossy vanitas or city walls covered in a decade’s worth of car exhaust, graffiti, and Valentino ads, where the beauty is not in the original but in the decay.

Marilyn Minter: Pretty/Dirty on view at the Contemporary Art Museum Houston until August 2.