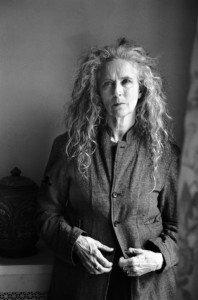 Internationally renowned sculptor/printmaker Kiki Smith will come to Denton this fall as the artist-in-residence for the University of North Texas Institute for the Advancement of the Arts in the 2013-14 academic year.

Smith starts her residency September 29. While at UNT, she will work with students, visiting classes to talk about her work. Throughout her residency, she will be making a large-scale print and, in March, will exhibit other pieces of her work at UNT on the Square. “I look forward to my residency at the University of North Texas,” said Smith. “I plan to use it as an experimental time for learning ways new to me to create large landscape prints celebrating the Texas wildflowers.”

Smith, who received a Department of State Medal of the Arts Award in 2012, is the daughter of sculptor Tony Smith and opera singer Jane Lawrence Smith. Smith began sculpting in the 1970s and, by the 80s, became known for working in a variety of media. In 2006, the Contemporary Arts Museum Houston hosted Kiki Smith: A Gathering 1980-2005, organized by the Walker Art Center.