Every five years, the German town of Kassel is transformed into Documenta, a sprawling, intellectual exhibition considered a must-see by curators, collectors, and critics the world around. This year, I had the opportunity to go there and see it for myself. And to be honest, I found out I had a lot of misconceptions about Documenta. I had the impression that it is a showcase for innovative art but, frankly, a bit pretentious. Both assumptions ultimately proved to be false. 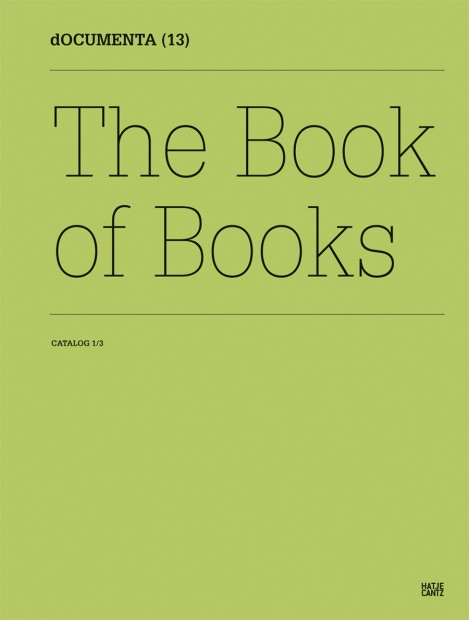 Unable to make the opening, my first impression came from bookstores that had already stocked the exhibition’s three massive catalogs, the largest of which is a whopping 767 pages of dense text with only a smattering of thumbnail images. It’s titled The Book of Books, and I cannot tell if that is tongue-in-cheek. Before I left for Germany, I had also read Smith and Saltz lament the unruly, whale-like nature of an exhibition that spans four cities (there are satellite spaces in Kabul, Cairo, and Banff), over two hundred artists, ten museums in Kassel, and a host of off-site projects. Maybe it’s because I came from Texas, but the grand scale of the thing didn’t really affect me as much as it did my colleagues from NYC. I rather enjoyed getting lost in the galleries, finding my own path, and stumbling upon some truly stunning artworks. It’s Documenta after all. If people are traveling from all over the world, they want to see something impressive in scale and concept.

I had expected a text and theory heavy exhibition but was pleasantly surprised to find a conglomeration of discrete, engrossing installations with an incredibly high production value. It was clear that significant support and freedom were given to the artists to realize their projects, which made for a beautiful exhibition. It also meant that the vast majority of included artists are established to the point where they can muster such resources and therefore familiar to most who follow contemporary art; so there was not that cutting-edge feel of an artist-run space or small gallery exhibition. The artists in Documenta are hitting their stride and have been given an unparalleled opportunity to showcase their projects to the world. Most blew me away with their work. I am still mulling over some of the ideas and objects presented and will take a few posts to touch on what I believe are the highlights of the exhibition. 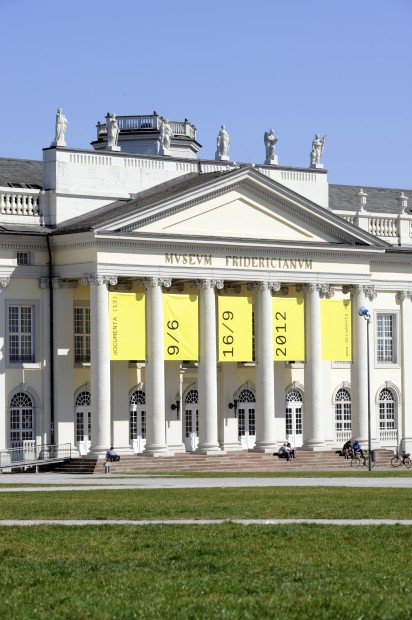 The first site I want to touch on is a room that I made a point of finding, a small enclosed gallery in the Fridericianum featuring drawings and research notes by Mark Lombardi. I will never forget the first time I saw his work in the 2001 group exhibition “Out of Order: Mapping Social Space.” I was 21 and was working as an intern at the High Museum of Art trying to figure out what to do when I graduated from college. I wandered into the Atlanta Contemporary Art Center and was bit by the bug for contemporary art. Lombardi’s meticulously researched diagrams tracing the flow of influence and money amongst powerful people and companies showed me that art could be engaged with the world, give us a new perspective on our own reality, and look delicate and beautiful all at the same time. His drawings have been rattling around in my brain ever since.

Since I have moved to Houston and learned more about his background in the curatorial department of the CAMH and his research at the Houston Public Library, Lombardi’s work has taken on a specifically Houstonian resonance. Many of the power brokers in his drawings still live here in Houston, but most of us don’t see them or prefer not to think about what they are doing. Lombardi’s research into the Bush Family, Enron, and the Saudi royals started to trace what was taking place around him, and his work has had staying power because it seems to point to many of the events that came to light a decade after his drawings, including the collapse of Enron, subprime lending, and the wars in Iraq and Afghanistan. I also love that the very first exhibition on Lombardi’s C.V. is the 1995 Big Show at Lawndale. 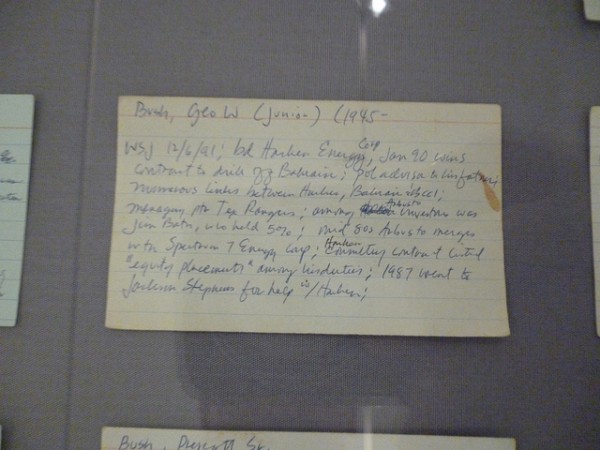 It turns out that the curator of this year’s Documenta, Carolyn Christov-Bakargiev, shares a personal connection with Lombardi, who she met shortly before he committed suicide. She gave him his first big break in NYC when she included him in the 2000 Greater New York at PS1 and has recreated the installation she curated there twelve years ago in the center of the Fridericianum. It includes two large scale drawings and a set of vitrines with Lombardi’s notecards. (Since he was working pre-internet, most of his research was done in books and compiled on cards organized by subject.) Christov-Bakargiev juxtaposed his work with that of Korbinian Aigner, a Bavarian village pastor who was imprisoned in a concentration camp in Dachau in the 1930s because he took a public stance against the Nazis. He tended the garden in the concentration camp and cultivated four new species of apples there, one for every year of his imprisonment. He was also an artist and drew apples alone or in pairs with remarkable detail and consistency of composition until he died in 1966. A towering grid of his apple drawings surrounds the vitrines with Lombardi’s notes, implying a connection between the clarity of their conceptual projects and the poignancy of their tragic circumstances. 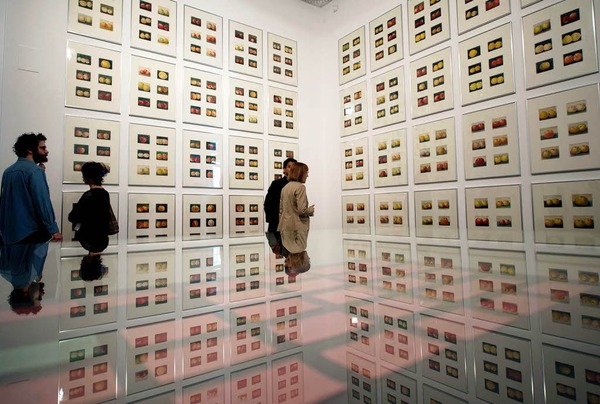 The scale of Lombardi’s drawings, which are nearly twelve feet long and inscribed with level upon level of tiny interconnected names, and the stack of apples far above where you can see them also seem to metaphorize the artists’ feeling of powerlessness in the face of overwhelming forces. Both used a meticulous research-based approach to find some sort of verified truth, even as both artists’ projects were ultimately stunted. The melancholy is palpable, and upon exiting this room, you can look down on a rotunda where the curator gathered what she calls “The Brain” of the exhibition, “a number of artworks, objects, photographs, and documents, brought together as a programmatic and oneiric space, in lieu of a concept.” It includes a small Bactrian Princess from the second millennium B.C., Man Ray’s “Object to be Destroyed/Object of Destruction/Indestructible Object” (1923), a selection of toiletries that once belonged to Hitler, and a small sculpture by Sam Durant, “Calcium Carbonate (ideas spring from deeds and not the other way around)” (2011). 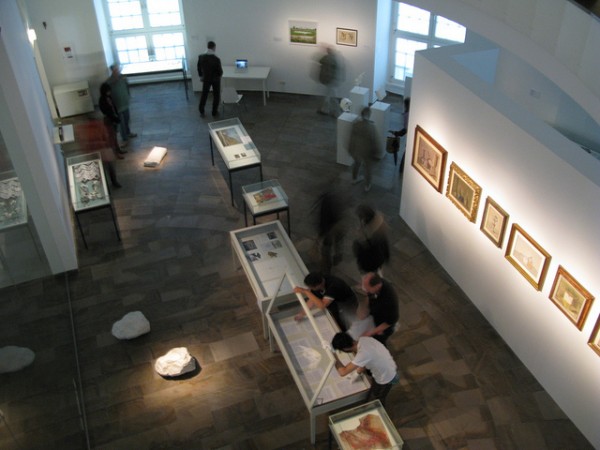 Rotunda in the Fridericianum: The Brain (c) All rights reserved by latitudes-flickr

Her strategy is willfully open-ended and goes right to the edge of non-sense and disorder. In her introduction, Christov-Bakargiev writes that she has structured the exhibition around positions that a subject can take. “The four conditions that are put into play within the mental and the real spaces of the project are the following:

— On stage. I am playing a role, I am a subject in the act of re-performing.

— Under siege. I am encircled by the other, besieged by others.

— In a state of hope, or optimism. I dream, I am the dreaming subject of anticipation.

— On retreat. I am withdrawn, I choose to leave the others, I sleep.”

This associative method of organizing artworks in space creates an almost stream of consciousness feeling as one moves from one artwork and one artist to another, highlighting the subjective ­­­­­­­­­­­­­­­poetics and almost sentimental aspects of each work. Her approach is flexible enough to allow each artwork in the exhibition to stand on its own terms. However, it makes for a dreadfully rambling catalog. I know it’s not in the nature of Documenta, but I wish she would have shown more and said less in the books. That being said, I think I need to learn to take my own advice and post more pictures next post. I am still unpacking and gathering my notes, so more to come . . . 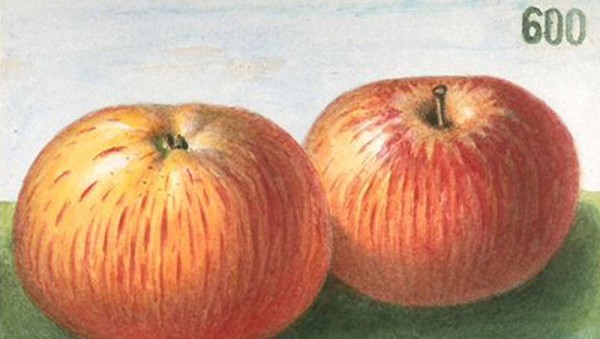 Fascinating to learn that Mark Lombardi was living and working in Houston. I, too, knew him before his death when I was living in Brooklyn and a good friend was his neighbor. Got to see some of his work in progress. Now I’m sort of intrigued by the chicken and egg of his process: did the drawings come out of his experience in Houston or did he come here specifically to do the research for the drawings?

My understanding is that Mark Lombardi moved to Houston after studying at Syracuse with Jim Harithas. When Harithas came to the CAMH, he brought Lombardi as his assistant. After working at the CAMH, Lombardi took a job at the Houston Public Library, and it was there that he developed his research and his signature drawings.

Rachel let’s talk about the brain when we get back..