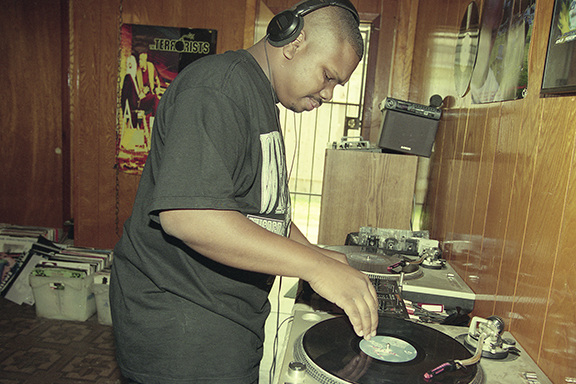 Kool Herc. Grandmaster Flash. Jam Master Jay. Dilla. 9th Wonder. DJ Premier. This list of DJs represents the pillars of hip hop’s pantheon. Whether they’re enshrined at the Rock & Roll Hall of Fame like Herc, Flash, and Jay, or in a museum like Dilla,  no list of all-time-top-five DJs would exclude these titans of the ones and twos. But Slowed and Throwed: Records of the City Through Mutated Lenses at the Contemporary Arts Museum Houston (CAMH), reveals what Houstonians and real hip hop heads have known since the early ’90s: that this list is incomplete without Robert Earl Davis Jr., a.k.a. DJ Screw. Screw is in, not as an afterthought, but as the rebar in hip hop’s concrete.

As Robert Hodge, an artist in the exhibition, put it in his talk at the museum: “If you’re a southern artist, you have to fight for your space,” noting that all the top ten lists and other best-of compilations had a distinctly regional bent, based on where the radio stations were. “Top 40, what? You didn’t scour the country looking for artists. You went to Brooklyn.” 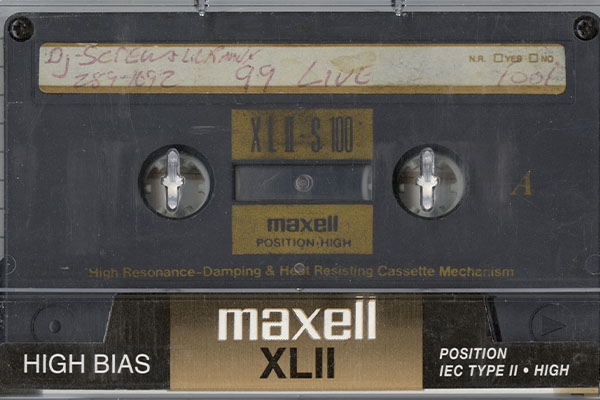 “Screw culture is a lasting testament to the unique experiences of Black Houstonians. For example, when Beyoncé used chopped and screwed in her song ‘Bow Down,’ her voice slowed down to the point she sounds like a spirit reflecting on her past life as a Black girl growing up in Houston and with screw culture. For the uninitiated, she was criticized for sounding ‘demonic,’ terrifying an average listener unfamiliar with the music and culture. But for Houstonians and southern hip-hop aficionados, the nod was a rightful throwback to home.”

Bradley also puts into context “screw” culture and its place in the thread of southern hip hop. She continues:

“On the surface, screw music sonically represented what many non-southerners still believe: the South as slow in spirit, intellect, and culture. But the sensibility behind ‘chopped and screwed’ music runs much deeper. One could connect screw music as the sonic complement of ‘lean,’ a codeine-heavy drink mixed with juice or soda. Where do you think the notion of ‘slowed and thowed’ comes from? Like its musical cousin, lean slowed the world down and thowed the drinker off to a place where they existed on their terms, sometimes to get away from the world around them.”

Screw, born in 1971, died on November 16, 2000 of  what Texas Monthly describes as a “codeine overdose with mixed drug intoxication.”

One of my favorite tributes to hip hop and to Screw places the Houston scene smack in the middle of the genre’s history, and visually connects with Bradley’s point. Midway into Erykah Badu’s Love Of My Life (An Ode To Hip Hop), a few of Houston’s best make a blurred, double-exposed cameo as the music gets “slowed and thowed.” 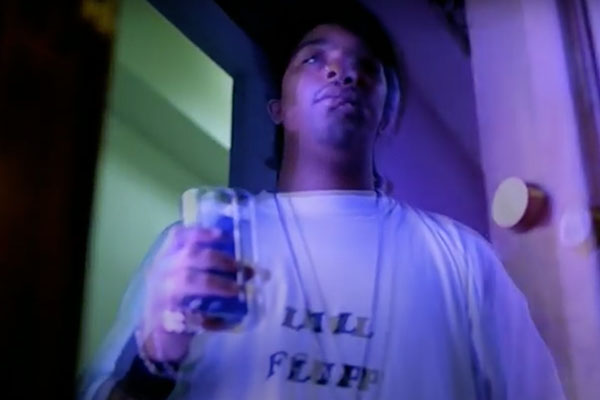 Slowed is currently up at CAMH and will be extended when the museum reopens, even as memorial and funeral services scheduled for tomorrow and Tuesday (June 8 and 9) take place for George Floyd. Floyd is the African America man who was killed by police in Minneapolis less than two weeks ago. He grew up in Houston’s Third Ward and was once part of DJ Screw’s Screwed Up Click, and is featured on the DJ Screw Chapter 319 two-disc mixtape. Floyd later released Block Party as a member of Presidential Playas, and is featured on Sittin On Top Of The World Freestyle from DJ Screw’s Chapter 324 Dusk 2 Dawn 1996. The track also includes Screw, Chris Ward, and AD.

The revelation about Floyd’s time in Houston has completely upended my perspective on Slowed. It has become something more now. Though coincidental to Slowed, the truth that Floyd’s death has revealed anew is that the literal knee on the necks of black people is part of an endemic and pervasive chokehold that has been around for generations.

In 1989, Radio Raheem was choked to death on a 65-foot silver screen at the Six Flags Mall in Arlington. He had gotten into a dispute with Sal at Sal’s Pizzeria about playing his “jungle music” too loudly, and it escalated into a street brawl. 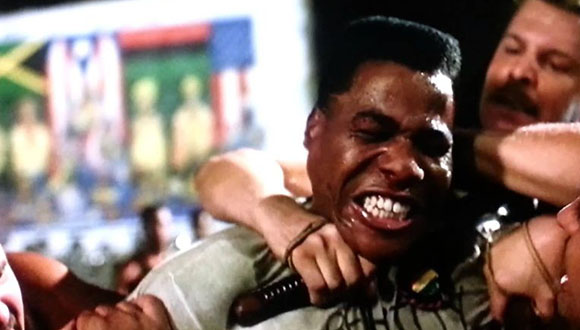 The cops came and pulled him off Sal as me and the 250 + audience members watched on that hot Texas day. Radio was put in a chokehold and his giant body slowly went limp. Throngs of bystanders pleaded for the chokehold to end, to no avail. Radio went silent. Granted, Raheem was a fictitious character in a Spike Lee movie, but the effect of watching him die, perhaps the first time I had seen a black man die so violently at the hands of police, makes the real death of real black men at the hands of real police even more unbearable.

What followed has come before, and is predictably here again. In Do the Right Thing, Sal’s Pizzeria was torched in an angry, impulsive, and cathartic moment of overwhelming helplessness. Lee’s character, Mookie, and my fellow audience members were too young to have experienced the public lynching of black bodies in the streets of American cities, or the Tulsa Massacre in the summer of 1921, or the 1955 murder of Emmitt Till. This is also not part of any history lesson we get in grade school. But Mookie and the audience knew instinctively, in their bodies, what this omitted history has documented so well — that there is little justice in the killing of black bodies at the hands of white men.

Hip hop has always broadcast these truths. Richard Pryor’s Niggers vs. The  Police; Gil Scott-Heron’s pre-hip hop No Knock, and The Revolution Will Not Be Televised; Melle Mel’s Message with the Furious Five; Public Enemy’s Fight The Power; NWA’s Fuck Tha Police; and Childish Gambino’s This Is America makes up a playlist that may fall upon deaf ears with each generation. Even the godfathers of Houston hip hop, the Geto Boys, added their voice to the fray. In City Under Siege, front man Willie D states “Police brutality is now formality, they’re kicking our ass, and we’re paying their salary.” The message from the streets is clear: we are under siege, and in the eyes of the law, black lives are disposable.

After the peak of the Geto Boys, Screw came up with the first group of Houston rappers that can be described as a generation, and his chopped and screwed style would be the beats and grooves that would define the Screwston sound. South Park Coalition, UGK, Lil’ Flip, Lil’ Keke, Chamillionaire, Mike Jones, Paul Wall and Swishahouse — some of the biggest names affiliated with that sound at one point or another got chopped and screwed. 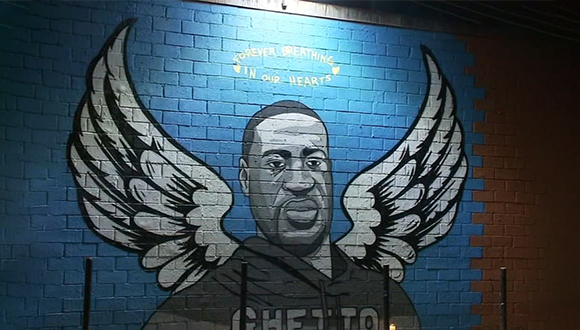 A mural by artists Donkey Boy and Donkey Mom, unveiled on June 1, in honor of George Floyd.

Screw’s history with the style he pioneered had humble beginnings that speak to tenacity, creating opportunities with what you are given, and sheer force of will. A new documentary about his life reveals as much. As Slowed and Throwed co-curator Big Bubb describes it in this CAMH interview:

“Growing up, me and Screw thought that we’d be truck drivers like our fathers. But along the line somewhere, we both fell in love with music, the scratching, the DJing, to the point where we both became DJs. It was always a house party back then in the neighborhood. And we became known as the DJs.”

Bubb goes on to talk about how they used their lunch money to buy, record on, and sell cassette tapes of their songs to ‘gangsters,’ and neighbors.“That went on for a couple of years. I stopped DJing, Screw stayed with the tables, and he became DJ Screw, and the rest is history.” 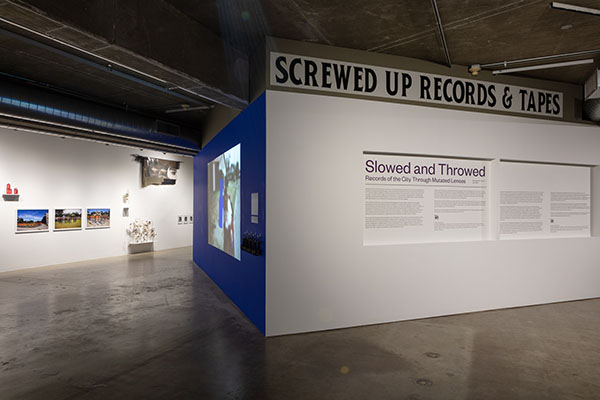 Installation view of Slowed and Throwed: Records of the City Through Mutated Lenses.

The Slowed exhibition breaks down into two parts. The first is a recreation of the facade of Screwed Up Records & Tapes. In the store’s recreation are original tapes that Screw recorded, selections from his personal record collection, photographic portraits of Screw, as well as paintings depicting the maestro. Beyond the scholarship and information the record shop represents, this mini-museum also adds a sort of physical presence of Screw to the exhibition. 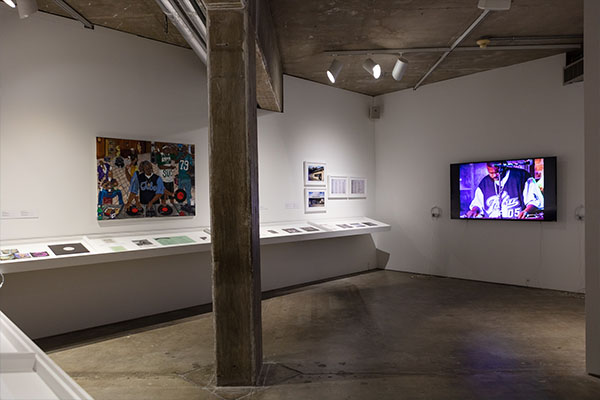 The other part of the show is a collection of works from artists whose photo-adjacent pieces are never too far from a grounding in Screw’s inventive, slowed and throwed aesthetic. Artists Hodge, Butler, McCloud, Castillo, and the others create the land bridge between art and hip hop.

The photographs by Jimmy Castillo have a cadence and oscillation that immediately achieves the equivalences that Slowed aims for. In Mendoza’s Bakery, 2019, time-lapsed figures walk the perimeter of what remains of a building. Their phased-out forms present as multiples, occupying all of space, all of time, with their ghost-like forms signaling loss, remembrance, and the history of place.

Butler’s collage, now an album and cassette cover for an exclusive hip hop album from Reggie Bonds, could well be stock footage of what’s happening in the streets of America right now. Diaspora depicts a black man in the forefront, fist raised, with black men emerging from the background also with raised fists, as the Statue of Liberty and the Texas flag stand against a blue sky with puffy white clouds. The image recalls Soweto marches in South Africa, as well as the civil rights marches of the 1960s, bridging movements and messages that still resonate today. 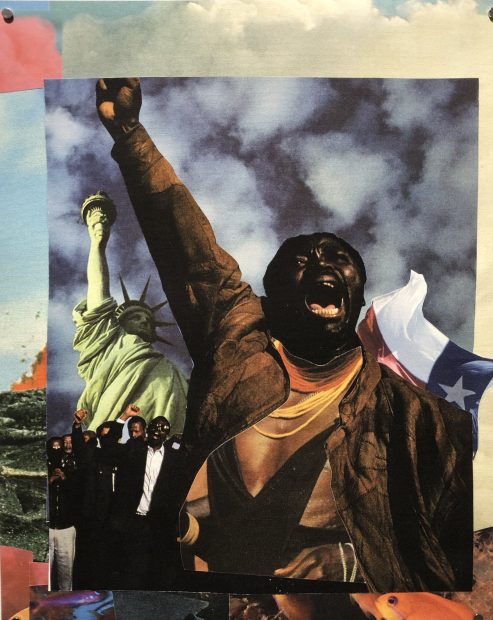 Hodge’s collaging of old record album covers — purchased from his digs through crates at record shops— with cut-out text completing his tableaux, is a kind of intuitive way-finding that is present in Screw’s own techniques. Taking a record jacket out of its context while layering and balancing multiple pieces from multiple albums is as chopped and screwed as it gets. 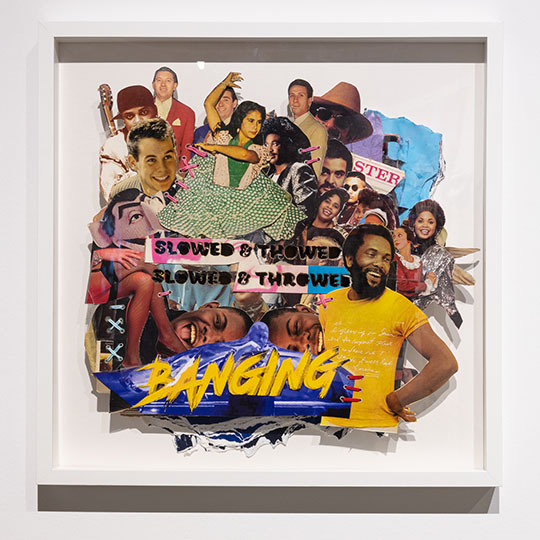 McCloud appropriates images of the Watts protests of August 1965 and juxtaposes them with photographs of the Atlantic Ocean. The photographs, inspired by a blended Soundcloud track of multiple protests and riots over the past few decades, is another layer in an exhibition that resonates with today’s headlines. 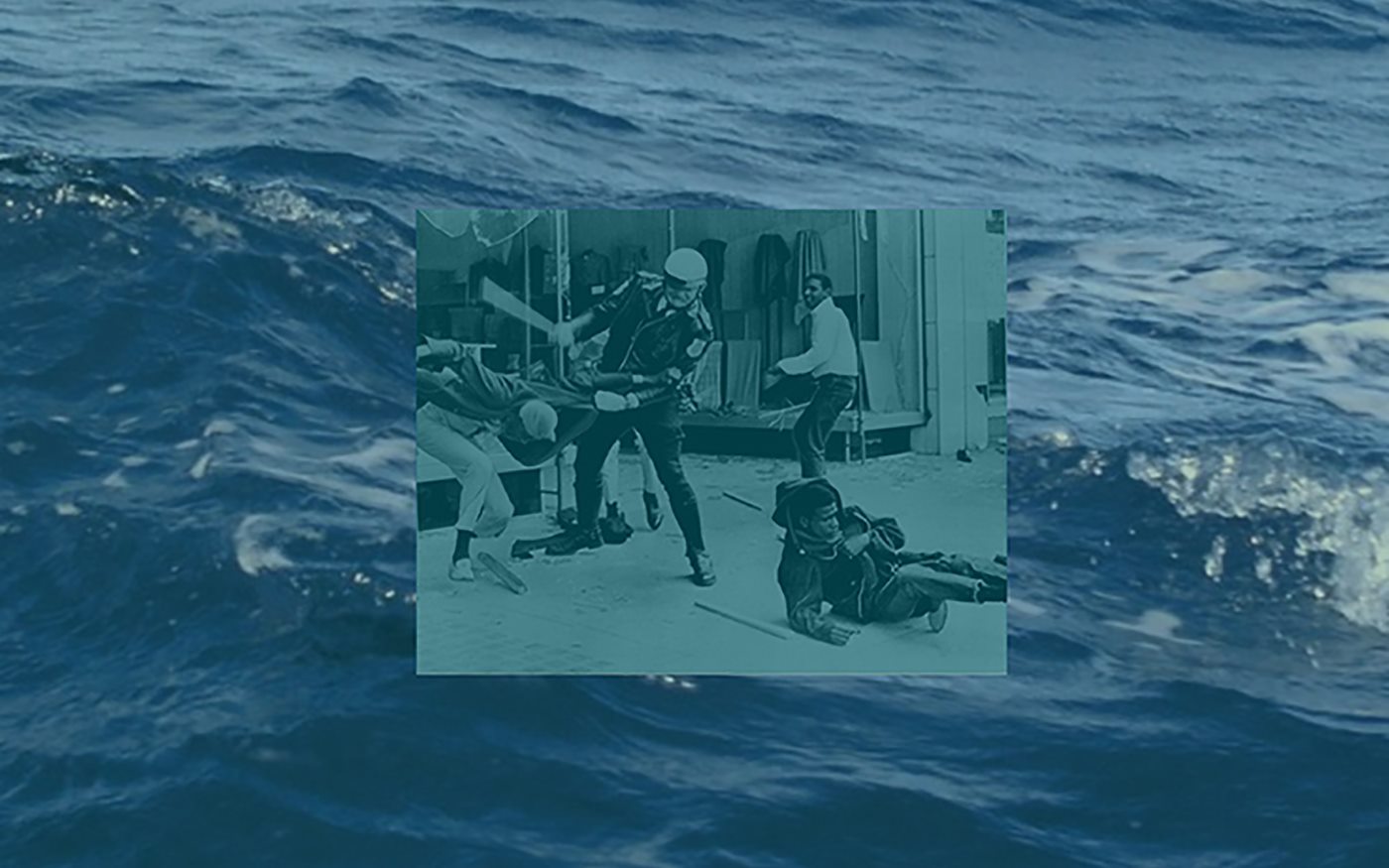 However, the success of Slowed (which opened March 6) isn’t that it has somehow magically predicted the protests and marches that came after the killing of George Floyd. It is that Restrepo, Big Bubb, and ESG moved the CAMH beyond its comfortable demographic and subjects while listening to voices much closer to the whole of this, my new city, and the culture that exists in its regularly marginalized communities of color. The stories and sounds of the Screwed Up Click are as Houston as anything can be. I wish Screw were here to see this. 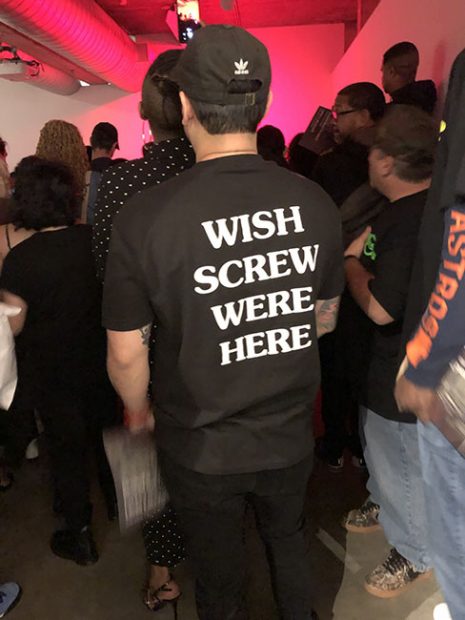 A museum visitor’s t-shirt at the opening reception for Slowed and Throwed, March 6, 2020.

‘Slowed and Throwed: Records of the City Through Mutated Lenses’ at Contemporary Arts Museum Houston. The museum is currently closed to the public due to Covid-19, but when it announces reopening plans it will also announce the show’s extended run.