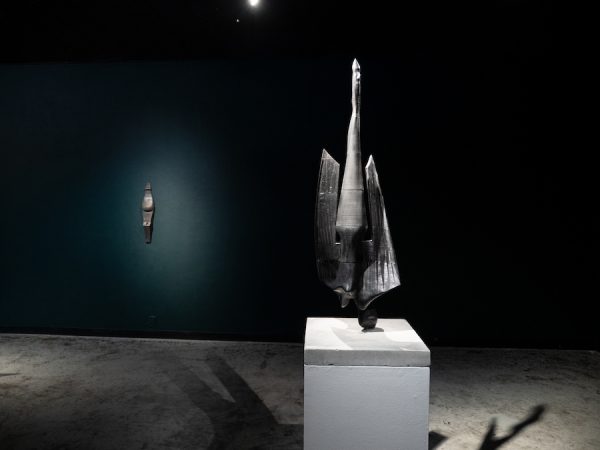 Shana Hoehn’s installation of new sculpture at Women & Their Work in Austin is at once tranquil and disquieting, a chilling grotto to temporarily slip the leash of late summer’s suffocating heat. Appropriately titled Hauntings, the otherworldly space is eerie and bewitching, inhabited by mostly-femme hybrid forms that Hoehn derived from the gaudy hood ornament designs of classic American automobiles. Dimly lit and vacuously quiet, with walls painted a deep kelp-green, Hauntings initially suggests being submerged underwater. 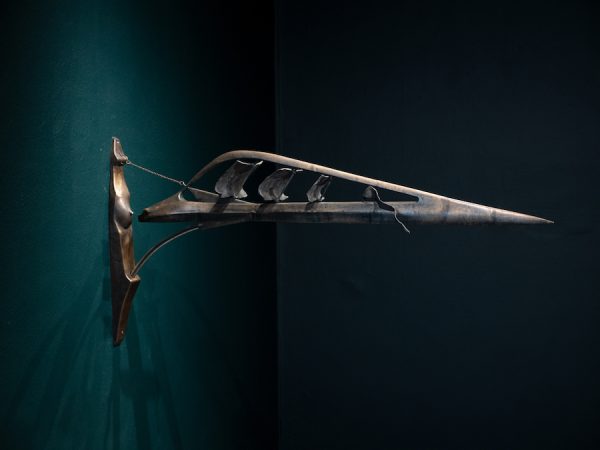 Jutting nearly four feet out from a verdant wall is the revengeful bronze and steel 400 years of digestion, serpent swallows ship (2019), wherein a bloated, coppery-brown snake floats, eyeballing a metallic breast-as-wall-mount. Only mild oxidation shows on the russet epidermal surfaces, though a milky-green film of corrosion, or even a thin skin of algae, would not appear out of place. The serpent has recently gorged itself on a sailing vessel, one modeled after a Plymouth brand hood ornament, which is itself modeled after the Mayflower ship that carried the Pilgrims to colonize America 399 years ago. More specifically, the “400 years” in the title may also reference the exact length of time that has passed since the advent of slavery in what is now the United States. Amplified and distended to a disconcerting degree, the reptile’s silhouette resembles the Xenomorph’s skull from the original Alien, a film where the bodies of the archetypal colonizers get colonized. 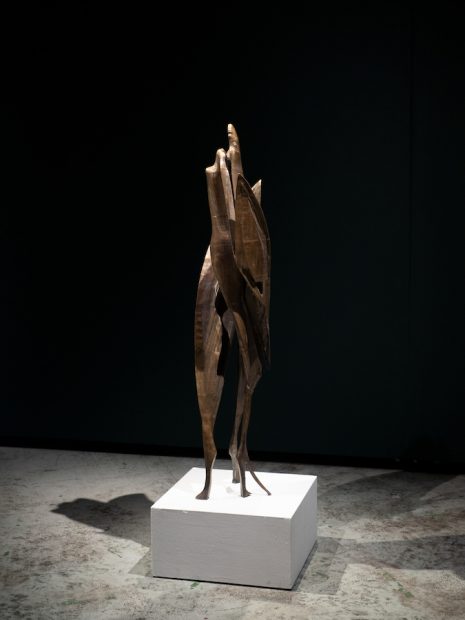 Drifting through the installation, the mise-en-scène unfolds into a preternatural hideout approaching the uncanny. I have never drowned, clearly, but I possess at least a cinematic impression of what it’s like to sink into a watery grave. Alternately, several works evoke my conception of interstellar monsters, a construct I most certainly owe to motion-picture genres like science fiction and cosmic horror. The bronze Moth emerges from Lady-jet cocoon (2019), for example, is a macabre fusion between the nominal flying insect and a flying goddess hood ornament that was produced by the Nash Motors Company in the decade after the Second World War. Its digitigrade legs appear evolved for stalking ocean floors or alien planets (Xenomorph Prime, anyone?), faraway tableaus I have little trouble conjuring. Much of Hoehn’s prior output has included highly-filmic video art, so perhaps the celluloid-as-aperture is no coincidence. 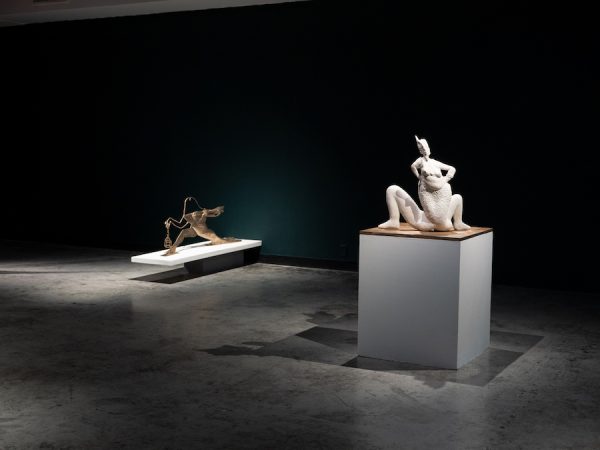 The 14 sculptural works comprising Hauntings are primarily fabricated from metals, wood, clay, and plastics, but Hoehn has also incorporated digital manipulation technologies throughout. These contemporary shaping techniques are mostly latent, save for the impossibly refracted and warped behavior exhibited by some of the more traditional materials. The wood, putty, and paint in Obscene Songs [siren and Baubo] (2019) nod to Greek mythology and possibly blue humor. A deadly songstress — recalling Ursula from Disney’s animated Little Mermaid, albeit with a vertically-pancaked skull — protrudes like a bawdy figurehead from the vulva-baring, notoriously ribald goddess Baubo. Exposed genitals are a trademark of Baubo statues, but the setup in Hoehn’s piece hints at the importance of timing; one must first get sucked in by the siren, then fully circle the compound-creature before the big reveal. Is the Goddess of Mirth delivering a punchline? A jab aimed at puritans, industrialists, or patriarchs? 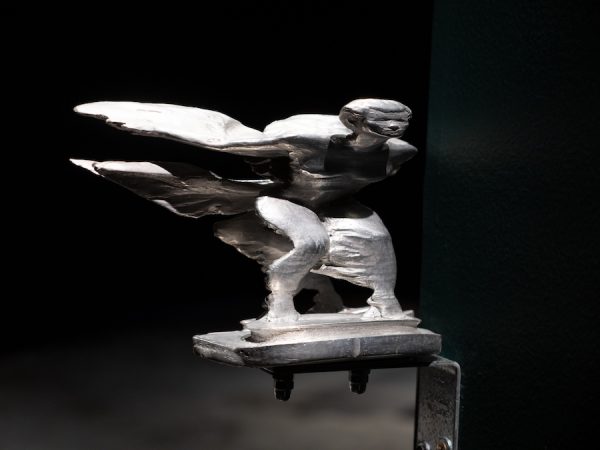 Hoehn originally conceived of the formal framework for Hauntings by studying the figureheads of waterships. But the artist quickly noticed that these exaggerated female forms — hair flowing, breasts beetling, spines arched unnaturally — were not exclusive to the bows of naval ships. In the postwar United States, where a booming economy ramped up automobile production, the would-be bows of America’s modernized transport vessels bore the figurehead of a new, prosperous century: the hood ornament. Automobile manufacturers including Cadillac, Packard, and Buick adorned the hoods of their mass-produced machines with gleaming, brazen figurines of variously-exposed, wind-whipped women. These diminutive caricatures, Hoehn asserted in a recent interview with Mary K. Cantrell for Sightlines, reduced women to “trophies.” By repurposing their forms into occasionally confrontational superbeings, Hoehn digs at the systems of capital and power that originally denigrated them. While the sculptures are gnarled and structurally outlandish, their subdued colors, murmuring under low lighting, produce an entangling veil. I eagerly returned multiple times to individual works, savoring the flummoxing process of trying to identify exactly just what the hell I was looking at. 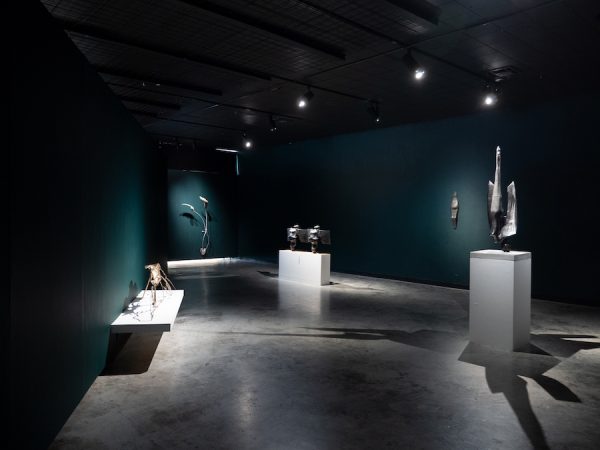 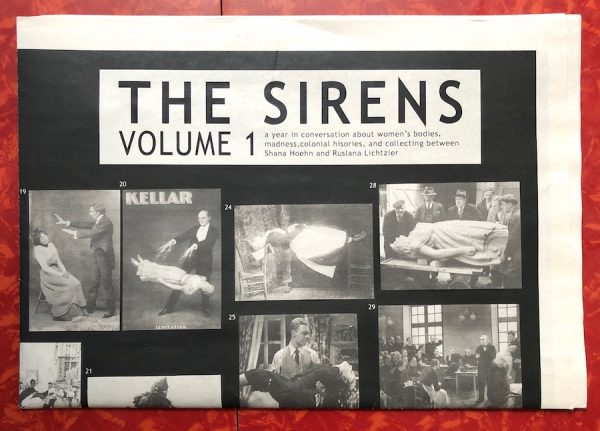 In addition to waterships and hood ornaments, Hoehn has taken schematic samples from her own research archive — an  impressive, centuries-spanning image collection evidencing tropes by which women are depicted across diverse media including eighteenth-century paintings, nineteenth-century hypnosis guides, twentieth-century war machines, and contemporary stock photography. Selections from said archive, plus text developed in collaboration with writer, curator, and educator Ruslana Lichtzier, are compiled in a newsprint edition, The Sirens: Volume 1, on view and on sale in the exhibition. The Sirens presents historical evidence of the visual subjugation of women in media, which won’t surprise many people. What is startling to contemplate, however, is how utterly invariant the aesthetics of subjugation have remained over hundreds of years. 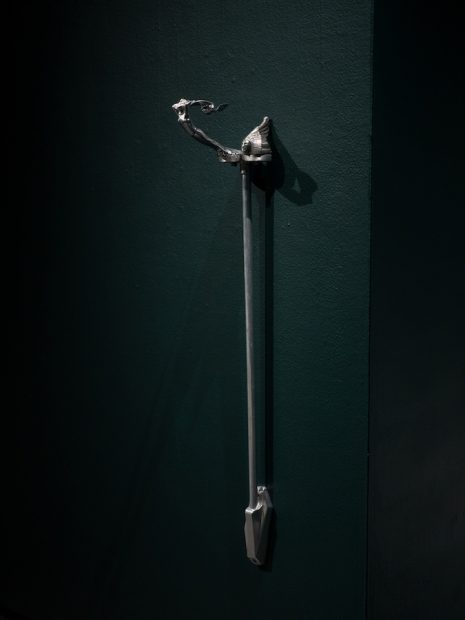 Appropriations in hood ornament design weren’t strictly corporeal — they were also cultural, as seen on the bonnets of Pontiac vehicles beginning in the 1930s. The now-shuttered General Motors division, named after an Odawa chief, famously produced radiator caps and hood ornaments bearing the feathered headdress-wearing mascot “Chief Pontiac.” Hoehn’s least abstracted work, Duplicates of Cadillac Goddess and Pontiac Chief hood ornaments (2019), pairs the titular automobile adornments, nearly verbatim, side-by-side. Understated, the one-off, minimal gesture is a smart deviation from the rest of Hauntings. Where the automobile, with such casual violence, instrumentalizes and absorbs these marginalized figures into its own body, Hoehn performs a quiet act of disobedience by isolating them. Should the idea of the automobile as a symbol of conquest and colonialism seem like a reach, consider that — even beyond the aforementioned colonial glorification inherent to the Plymouth brand — the hood ornaments of Chrysler’s DeSoto division were often a literal conquistador. 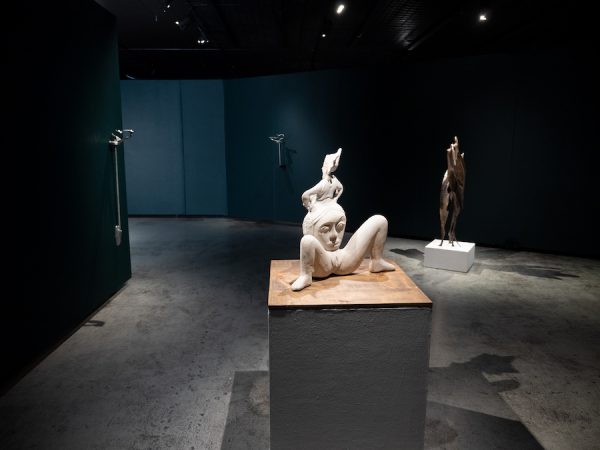 Women & Their Work produced a short documentary on Hauntings that features Hoehn discussing the project’s genesis, her formal decisions, processes, and critical concerns. Elaborating on show’s title, Hoehn offers: “I’ve been thinking a lot about these forms as hauntings, and the idea of a haunting as something that exists between time.” 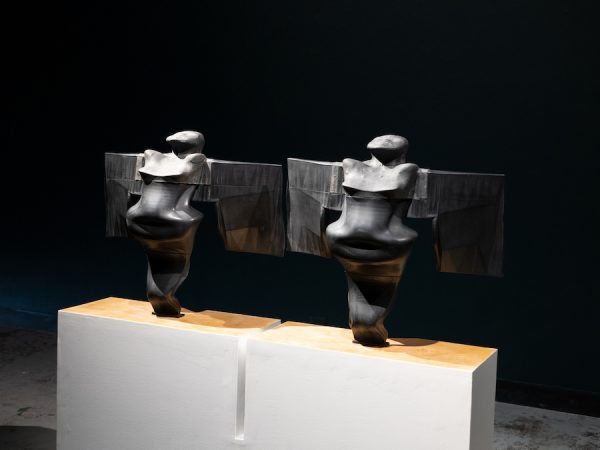 In terms of processes, the works in Hauntings very much lurk between windows of time. Hoehn’s behind-the-scenes, highly-contemporary digital modeling and manipulation provide a counterweight to classical sculptural and casting techniques, confusing their materiality. The gallery space itself, made so murky green and shadowy, bisected by a coercive directional wall that bends space, engenders a supernatural sense of being somehow simultaneously subaquatic and cast into the cosmos. It is a cabalistic cave where the past and the present, what’s above and what’s below, envelop concurrently. Within this collapsed space, amidst specter-like hybrid creatures, the linear narrative between then and now gets fractured. Hauntings summons viewers to confront historical through-lines of subjugation, and in the same breath, to conceptualize their dismantlement right now.