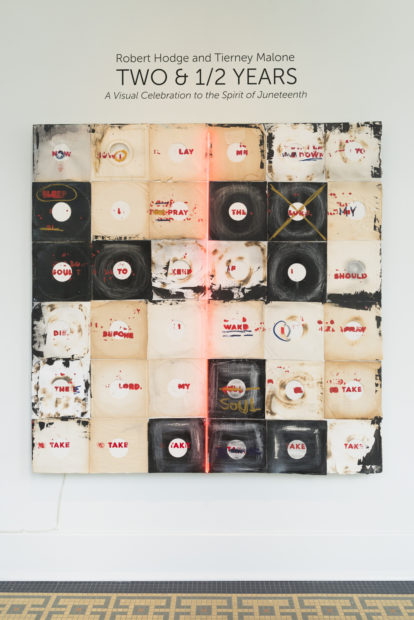 When the pirate Jean Lafitte captured slave ships in the 1800s, he brought them back to his headquarters in Campeche, as the island of Galveston was then known.  The “hero of the Alamo” Jim Bowie and his brothers acted as intermediaries for Lafitte and sold the slaves onward, making a fortune in the process. Galveston would go on to become the largest slave market west of New Orleans. And it was on Galveston island on June 19th, 1865, that slavery in America is popularly considered to have come to an end*, two and half years after the Emancipation Proclamation, when Union general Gordon Granger stood on the balcony of Galveston’s Ashton Villa and read aloud General Order Number 3, which stated:

“The people of Texas are informed that, in accordance with a proclamation from the Executive of the United States, all slaves are free. This involves an absolute equality of personal rights and rights of property between former masters and slaves, and the connection heretofore existing between them becomes that between employer and hired labor. The freed are advised to remain at their present homes, and work for wages. They are informed that they will not be allowed to collect at military posts; and that they will not be supported in idleness either there or elsewhere.” **

Thus, Galveston is the home of Juneteeth, the holiday that sprang from that June 19th announcement. And that’s the reason for the title of the Galveston Arts Center show, Two & ½ Years: A Visual Celebration to the Spirit of Juneteenth, a collaborative project by artists Tierney Malone and Robert Hodge.

The seeds of the duo’s collaboration were planted four years ago when Hodge listened to Malone’s 90.1 KPFT radio show “Jazz Spotlight” and heard the Juneteenth history in a segment about slavery in Texas that Malone created and narrated. Hodge loved the jazz-filled piece and thought it would be interesting to do a version using contemporary hip-hop artists to engage and educate a younger audience. Hodge and Malone’s album debuted last year on June 19th featuring quintessential Houston hip-hop pioneers like Lil’ Keke and Z-Ro, as well as newer Houston talent. They see the project as ongoing; a piece by 2010 MacArthur Fellow Jason Moran will be added in the next few weeks. You can listen to the album here.

The Galveston Arts Center is presenting the visual component of the 2 ½ Years project. Malone and Hodge are generationally different artists, but both use imagery from popular culture. Malone riffs on history and jazz with cool, elegant paintings carrying fragments of text and cropped graphic images culled from album covers, books and signs. He uses bold areas of color and spare and dramatic forms with his artfully selective text. 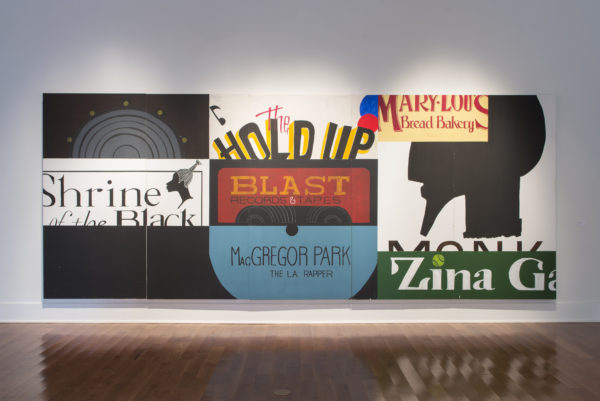 Malone’s Third Ward Jubilee, 2016, fills the back wall of the gallery. He uses the dramatic silhouette of an African wood sculpture and pairs it with the cropped word “Monk,” in what may or may not be cover art from an old Thelonious Monk album. The text and the sculpture’s shape are both formal abstract elements and signifiers of African and African American culture. Rectangles of color and cropped text from logos and signs include Houston icons like “The Shrine of the Black Madonna” and “Zina Garrison” (the “I” is topped with a tennis ball). A dusty blue semicircle is a giant version of the label for the Houston-recorded 7” LP MacGregor Park by The LA Rapper. (Zina Garrison began playing tennis at a free clinic at MacGregor Park.) There is a cropped image of one of Blast Records and Tapes iconic mix tapes. All of these elements are masterfully combined into this large-scale painting which functions as a powerful work of abstraction while simultaneously conjuring memories and associations for people both familiar and unfamiliar with its roots.

Hodge has a much more raw aesthetic as he creates collages of frenetically layered figures from culture—pop and otherwise—running the gamut from MC Hammer to Pope John Paul II. He visually samples iconic African-American artists like Aretha Franklin and white artists like Elvis who ripped off African-American culture. He arranges them in politically and culturally charged combinations. Hodge builds up jagged layers of painted and sometimes “gilded” cardboard scraps to create a substrate for these collaged images. Their irregular shape and thickness makes them almost sculptural; they look like giant chunks of bark pried off some mammoth East Texas pine. 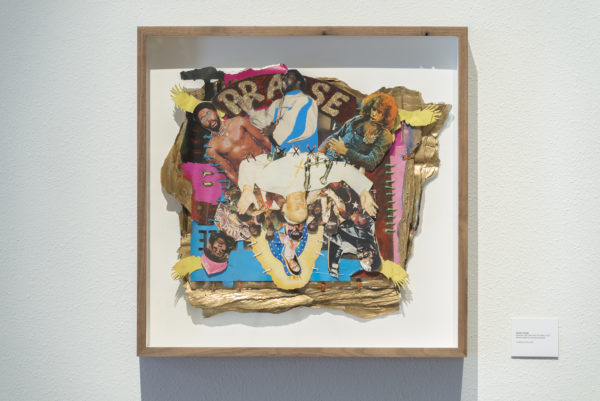 Between the Devil and the Deep, 2017, after the Ella Fitzgerald song, is a swirling vortex of predominately ‘70s figures from pop culture, cut out and glued and stitched down. There’s a shirtless man from the Bar-Kays, his eyes painted out. There’s Flip Wilson dressed up as Geraldine, Richard Roundtree as Shaft, and an unrecognizably young Neil Diamond. Across the top of the piece is a glittery word that reads “Praise.” In the center is a gospel singer in blue and white robes and below him is an upside down image of Pope John Paul II, the two stitched together at the waist.

It’s like those flip dolls they used to sell in plantation gift shops, two connected torsos with a skirt in between that would change them from black to white, but the white doll would have blond hair and a pretty dress, and the black doll would have a red and white gingham headscarf, presenting as a “mammy”. Viewers can pull a multitude of meanings from Hodge’s juxtapositions, but the Catholic church doesn’t have a great record on slavery—in 1866, just after the Civil War, Pope Pius pronounced: “It is not contrary to the natural and divine law for a slave to be sold, bought, exchanged or given.” In Hodge’s work, Pius’s hierarchy is reversed. 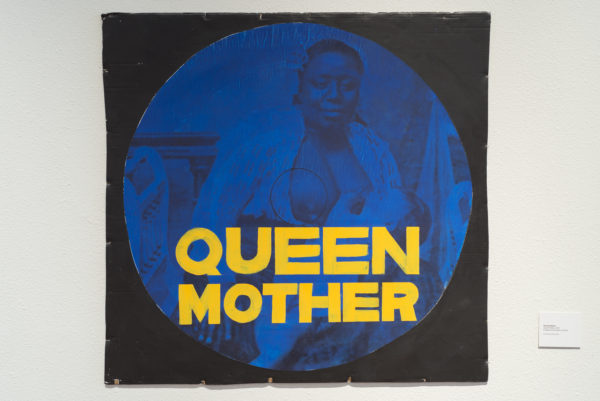 Malone lays out some powerful work by bluntly addressing slavery’s consequences. His 2017 Queen Mother is a blue-toned photographic image presented like an LP label. The title is written across the bottom in large yellow block letters like the title of an album. The blue toning makes the image harder to see but when it registers you realize it’s a 19th-century portrait of a black woman, her breasts bare as she nurses a white baby. Enslaved mothers were forced to become wet nurses for white children to the detriment of their own children. Those babies would grow up to own and oppress the women who had nurtured them.

Another photo-based work, My Connection to Slavery, 2017, is an enlargement of old portraits of a bearded man in a dark suit and a woman in a white dress with their names printed at the bottom, Prince Albert Cowan and Eliza Lang Cowan. Over the images Malone has painted “Slave Master’s Son” and “Enslaved African”. 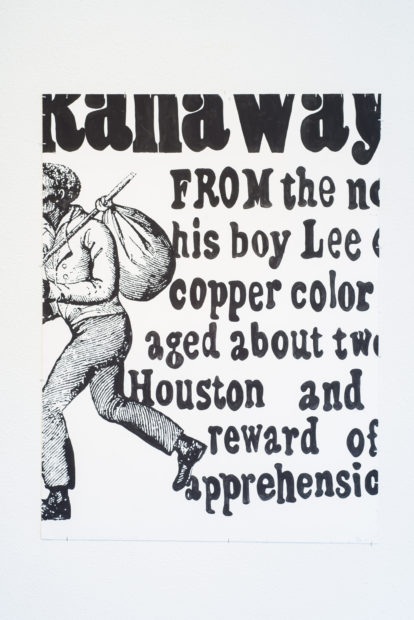 For Ain’t Never Goin’ Back, 2017 Malone cropped an advertisement for the return of a runaway slave. There is a partial figure rendered from an engraving of a black man with a hobo bag on a stick. Words from the snippet of the ad include: “boy,” “copper color,” “Houston” and “reward.” 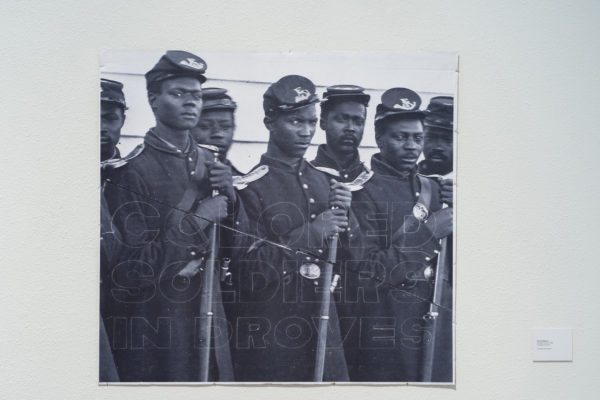 Part of Malone’s goal with the Juneteenth project is to stress the active role black people took in their own emancipation. In addition to myriad acts of resistance and escape, several hundred thousand black men served in the Union Army. Freedom Sound, 2017 is a large black-and-white reproduction of a period photograph showing black soldiers in Union uniform. They stand with their hands on their rifles and look straight at the camera with a mixture of gravitas and vengeance. The words “colored soldiers in droves” are outlined across the photo. The quote is from the slave narrative of Harriet Smith describing seeing black troops as a child. The men in that image are the ancestors of Black Lives Matter, early travelers on the long and seemingly endless journey to freedom and equality. If white people today are freaked out by peaceful Black Lives protesters, one can only imagine the hysteria of slave owners when confronted with these soldiers.

Very often politically engaged art ends up preaching to the choir, but the location of the Galveston Arts Center on the tourist-clogged Strand makes it possible for people to accidentally encounter art. The Center’s shop is visible from the street and acts as a lure; a tourist fresh from purchasing a fidget spinner or a “Hillary for Prison” t-shirt down the block can easily wander in. And tourists drive by Ashton Villa today, admiring the building. Most are unaware of what took place there on June 19, 1865 or that the elegant home was constructed by a man named Alek, an enslaved brick mason purchased specially for the job.

‘Two & 1/2 Years: A Visual Celebration to the Spirit of Juneteenth’ runs through July 9 at the Galveston Arts Center, 2127 Strand, Galveston, TX 77550. Photos by Ronald L. Jones.

*The real end of slavery came when 13th amendment was ratified. Georgia gave it the ¾ majority on December 6, 1865. Mississippi, the final hold out, didn’t ratify the amendment until 1995 and then failed to make it official until 2013 when they finally notified the U.S. Archivist.

**Naturally the order ends by admonishing people who have toiled their whole lives in servitude to be sure to keep themselves busy.

I visited the Galveston Arts Center for the first time not too long ago. We are getting ready to move down to Galveston so we stopped by. We loved the art that they were showing. Seems like they have a good curator so I’m looking forward to living nearby and seeing more shows. Also, when I got back my friends let me know that they will be showing their “Chuck and George” work there and so I’m really looking forward to that as well.