Charles Adams to Retire From Namesake Gallery in Lubbock

Charles Adams is retiring from his post at his namesake gallery in Lubbock, Texas. The gallery, which boasts Lubbock-area contemporary artists as well as early Texas and New Mexico artists, will announce a new manager this fall. 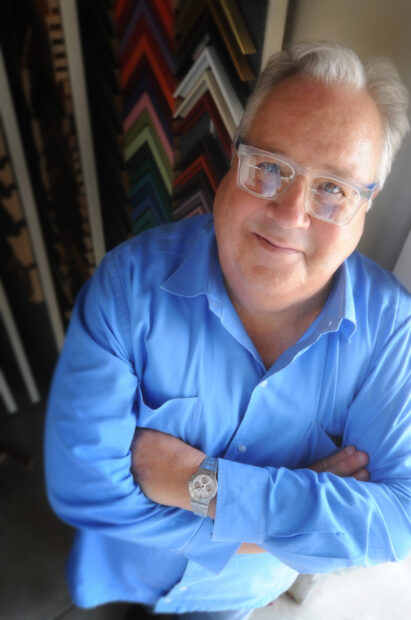 Mr. Adams was born in Lubbock in 1942. A graduate of Lubbock High School, he moved to New York to continue his art education at NYU. Later in life, he returned to his hometown and established the Charles Adams Gallery in 1985. In 2009, with the support of local business owner Margaret Talkington, Mr. Adams established the nonprofit organization the Charles Adams Studio Project (CASP). While CASP and the gallery are separate entities, the nonprofit owns the building that the gallery inhabits, and will be involved in the appointment of the new gallery director.

Chad Plunket, the Director of CASP, told Glasstire, “Charles was a kid in Lubbock in the 1950s, when it was small and rural, surrounded by cotton fields. To be that person and then be selling [Warhol] prints in New York in the 1970s is pretty incredible. Then, he came back in the 1980s to take care of his mother — that describes the kind of character he has.”

Mr. Adams speaks often of his love for Lubbock, saying that he “missed the wind.” What is now the Charles Adams Gallery on Avenue J began on Broadway Street in 1982, with a couple of moves in between. In the late 1990s, Mr. Adams attended a mayoral luncheon where Louise Hopkins proposed her idea for the Louise Hopkins Underwood Center for the Arts (LHUCA) in downtown. At the time, Mr. Adams knew if LHUCA became a reality, he’d want to move his operation nearby. Today, LHUCA and CASP’s facilities are neighbors throughout the downtown arts district, with what Mr. Plunket describes as a “great friendship, with different missions and programming.”

Mr. Adams has thoroughly enjoyed his career in Lubbock, and has been pleased to provide a venue for local and regional artists. He’s best known for his dry wit and frank, yet graceful style. Of his 40 years running a gallery in Lubbock, Adams declares, “I’m a spoiled brat and didn’t want to work for a living! Sitting behind a desk and talking to people is a lovely way to make one.”

CASP is the future home to twenty working studios, each the size of four-car garages, behind the 5&J Building. Eight of these studio spaces are currently complete. These climate-controlled studios situate artists within the Lubbock arts community. In a 2015 interview with Michelle Kraft for Bowerbird, Mr. Adams stated, “With the First Friday Art Trail we see that the public likes to see the process, to see how and why the work is created, and to get to talk to the artist.” The studio expansion will provide for this, allowing artists to work in spaces that rent for under market value, which in turn enables CASP to become increasingly self-supporting.

CASP began with a donation from Lubbock philanthropist Margaret Talkington, who knew, with her financial help, that Mr. Adams could do more to support the arts community.Mr. Plunket elaborates: “While [CASP] hold’s Charles’ name, he’s never made it about him. It’s about the artists. What I’ve witnessed is his immense generosity in regards to artists — free framing, mat board for high school art teachers — if he has it and someone needs it, he gives it away.”

Mr. Plunket jokes, “Though, all of [Charles’] best stories are secret.”

When asked what’s next, Mr. Adams said that “CASP is next.” He will fundraise alongside Mr. Plunket, and continue to build, with a focus on providing more studio and living space for artists in Lubbock’s downtown area. Mr. Adams was also happy that he’d now have the opportunity to attend the First Friday Art Trail. “I won’t be stuck in my gallery. I can eat at the food trucks! So many shows come and go and I don’t get to see the openings, so I’m looking forward to that. I’m excited about sleeping late! I’m excited about…all of it.”

Congratulations to Charles, a well-deserved retirement! For those that don’t know Lubbock, Charles’s gallery has been an artistic refuge in the desolate Panhandle for decades.
In the early 2000s, he, his gallery, and the people around it, probably shaped my thinking about art and life more than any other experience before or since. I can tie all of my professional achievements to his unique encouragements and heretical worldview and for that I’m grateful.

“Wonderful couple of articles by GlassTire and Art Dirt about the amazing arts communities in Lubbock and their philosophy! And a great comment left here by Chad. Makes me, at the age of 75, want to go rent one of those studios and submerge myself into that creative, generous and heretical soup! So exciting and so refreshingly unusual.“

Congratulations, Charles, on your retirement. It is funny because for all the years I’ve known you, I thought you were retired and only a gallery volunteer! I know you expected something sarcastic from me. I appreciate all the progress you’ve achieved in promoting and making the arts come alive in Lubbock. Well done. I’m truly grateful for all the encouragement and guidance you gave Chad while he was finding his way in the art world. You would be quite impressed with the success Dr. Dawkins has carved out for himself. I wish you the very best for what lies ahead. If I should move back to Lubbock, perhaps Zach would give me a job at the front desk. After all, I can also play solitaire also. Love and happiness always. Pam