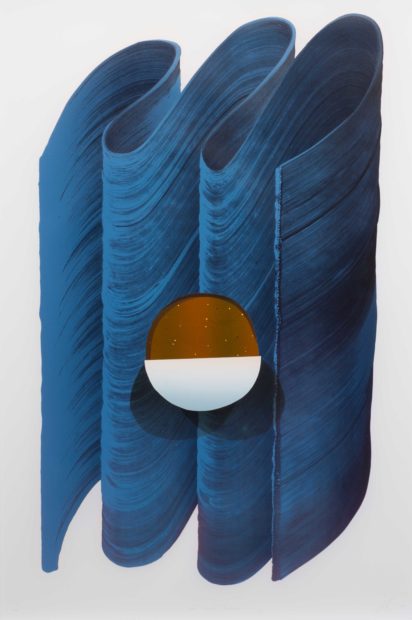 Let’s start with the fact that Jeffrey Dell’s latest body of work is exquisitely beautiful.

I wonder if this is how Dave Hickey felt when he started looking at works by all the otherworldly artists he championed in the 90s. These days to see an oasis of a show like Jeffrey Dell’s is to drink water after a long thirst. If you are a creature of pleasure (and I think most of us are), it’s a struggle not to be seduced by the lusciousness of Dell’s masterful prints.

These new works, on view at Art Palace in Houston, are technically brilliant screenprints on synthetic Yupo paper. This is a fancy way of saying you have to see them in person to appreciate them. Based on the digital images in this article, you will not see the way the ink sits infinitesimally above the surface of the paper. You can’t perceive its velvety surface. You can’t see the subtlety of the gradations of color, or the perfection of the registration — the crispness of the edges where one color meets another. 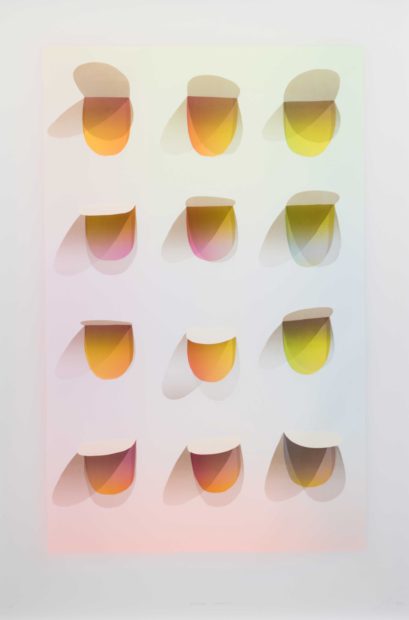 Dell is a master printmaker and longtime head of the print department at Texas State in San Marcos, so his command of technique should come as no surprise. But when I admired his proficiency to him recently, he was quick to quote John Waters: “Technique is nothing more than failed style.”

And while skill and beauty were the lures that drew me into this show, something else snagged in my memory afterwards. Sure, these works are pretty, but their candy colors are shot through with a melancholy and longing that elevates something that could otherwise be accused of being mere decoration. In some of the prints, tabs of paper appear to flutter against a dreamy idealized background glimpsed through an aperture. In others, you are invited to sink into a full-frontal starscape of the sublime. And the desire to know what is out there in Dell’s imagined landscapes is instantly recognizable, as is the unconscious knowledge that we’re never going to get there. 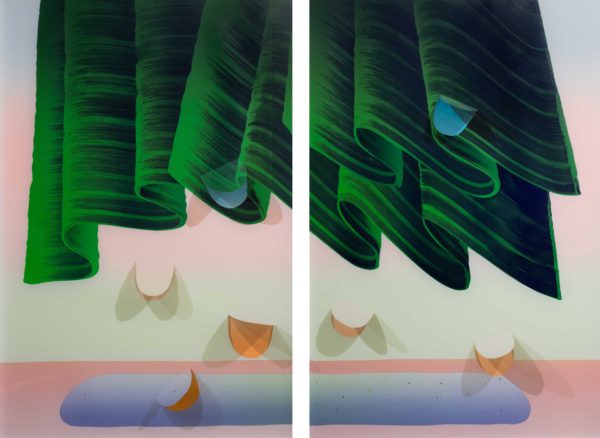 It is one of the most basic human feelings: longing tinged with sadness, and Dell is consciously cultivating it in these works. He likes how universal the sensation is, how it will arise in humans regardless of circumstance or class. We can all can relate to the idea of the better world, the one that got away, the dreamy life that’s so close you can almost touch it.

And these works are dreamy, although as Dell would admit, “dreamy” is a problematic word: it’s overly used, as he says, “admittedly in pretty awful ways.” But he likes the notion that imagery can make a promise it doesn’t have to fulfill — indeed, never reaching fulfillment is part of the point. As he comments, advertising and pornography wouldn’t work otherwise.

One of Dell’s influences is the flat-yet-dimensional language of Japanese ukiyo-e art, specifically the work of the 19th century master Utagawa Kuniyoshi. You can see the Japanese influence clearly in the works’ highly stylized cloudlike shapes, and in their gradient backgrounds and trompe l’oeil shadows, which add depth to the flatness.

Another influence Dell cites are the book covers of Chris Foss, whose paintings graced the covers of dozens of sci-fi paperbacks in the 1970s and 80s (and who also did the illustrations for The Joy of Sex, though any influence that book has on this exhibit is undetectable). Foss’s influence is most obvious in the spacey works dotted with little multicolored stars (Dell describes the split fountain technique he uses to get their variegated backgrounds as “soft plaid, like easy listening music from 1992 in Seattle”). 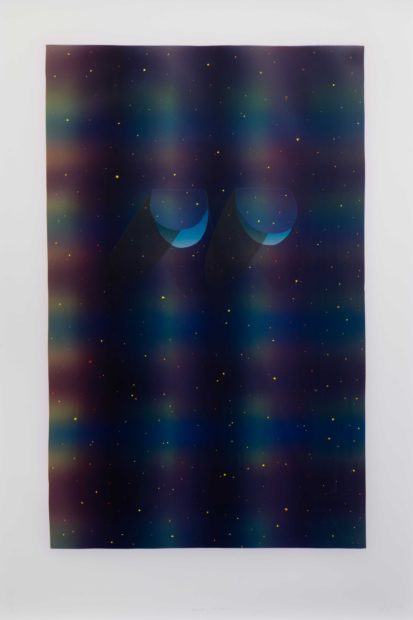 The titles also come from some of the books for which Foss did the cover art: The Palace of Love; Orphans of the Sky; The Seedling Stars. In old interviews, Foss always said he never read any of the books he created art for, he just relied on his imagination. Likewise, Dell himself hasn’t read them, but he says that as a kid he stared at Foss’s covers for hours. The work Dell is drawing from for this show — both Foss’s sci-fi dreamscapes and Kuniyoshi’s dramatic illustrations of old legends — inhabit the intersection between high art and entertainment, a place where Dell wants to situate his own work.

And he does. But like all art that appears easy, a tremendous amount of work and precision has gone into the apparent effortlessness, both technically and conceptually. It’s easy to make “difficult” art; what’s hard is pulling off something good that instantly elicits pleasure and recognition. In this show, Dell has hit that sweet spot.

Jeffrey Dell: Future Castles is on view at Art Palace in Houston through October 28, 2017.

A Steamroller Print Event Returns to Austin for...