In 2021, Flora and Bust, two recent works by Teresa Hubbard and Alexander Birchler, were acquired by the Modern Art Museum of Fort Worth. The collaborative duo’s video Grand Paris Texas (2009) and photographic series Holes (1997) were already part of the museum’s collection. I first saw their work during the No Room to Answer exhibition at the Modern in 2008. As a photographer who has dabbled in video work, I was immediately taken in by the cinematic quality of their photographic series, and their artistic take on documentary-like films like Movie Mountain (Méliès) and Giant.

Flora tells the story of Flora Mayo, an unknown American artist who was romantically involved with Swiss sculptor Alberto Giacometti in Paris during the 1920s. The narrative is intriguing and can be contextualized as part of a larger movement of revisiting and investigating the lives and work of women artists who have been overlooked, undervalued, and sometimes completely forgotten by the art historical canon. 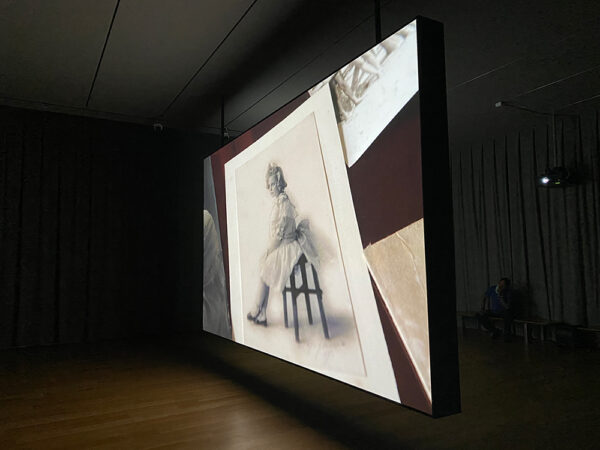 True to form, Hubbard and Birchler went beyond the simple presentation of a significant story by revealing it in a double-sided film installation. Viewers can opt to sit on one side or the other, and switch viewing sides as they would like. One side, presented in color, is a more standard documentary-style film comprised of footage of Mayo’s son telling his mother’s story while sifting through family photographs. The other side, presented in black and white, uses actors to recreate scenes of Mayo in her studio as well as scenes of her daily life with Giacometti in Paris. The two films are linked together through a shared soundtrack that includes Mayo’s son’s recollections and a narrative voiceover by the actress. 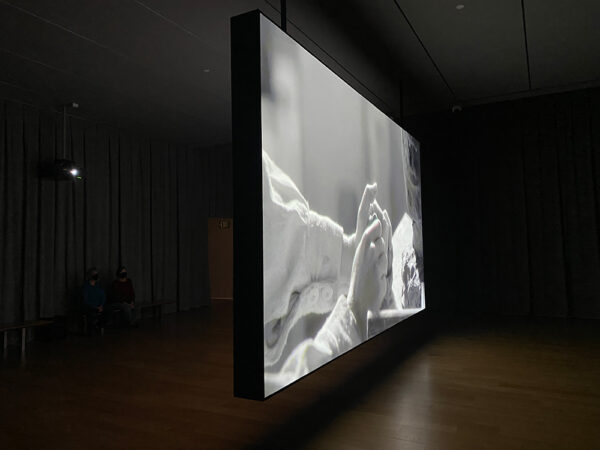 Outside of the room that houses the film is a detailed timeline of Mayo’s life, the artists’ storyboard drafts for the project, and Bust — an installation by Hubbard and Birchler that includes a reprinted photograph of Mayo and Giacometti and a reconstruction of a bust of Giacometti made by Mayo cast in brass. 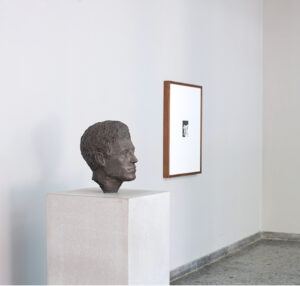 Teresa Hubbard & Alexander Birchler, “Bust,” 2017, Flora Mayo and Alberto Giacometti, with the bust she made of him, circa 1927. Photographer unknown. Original photograph belonging to Flora Mayo, kept under her mattress, lost. Film negative missing. Reproduction from only known duplicate print, archive of Fotostiftung Schweiz, Winterthur. Original clay bust portrait of Alberto Giacometti by Flora Mayo, lost. Reconstructed and cast in brass. at The Modern Art Museum of Fort Worth.

If you’re in Fort Worth, with 30 minutes to spare, stop by the Modern (on or before January 16th) to sit with this piece. It is an opportunity to experience the unique storytelling of Hubbard and Birchler, to learn about Mayo, and to consider the countless other artists who have been lost to time.

And, if you’d like to read more about Hubbard and Birchler’s work, read our past review of Eight and County Line Road and Sound Speed Marker.