Teresa Hubbard and Alexander Birchler‘s current exhibition at Ballroom Marfa, Sound Speed Marker, is constructed around a trilogy of videos:  three works, made between 2009 and 2014, all set in Texas, all taking film history as their subject, all using the physical tools of movie-making as “characters” on-screen.

The three video works chart an evolution in Hubbard and Birchler’s narrative technique.  The earliest, Grand Paris Texas (2009), is also the most conventional.  It is presented on a single, wall-mounted monitor, with headphones for the audio.  At 54 minutes, it is the longest and plays on a schedule, like a movie, rather than a loop, like an art video.  For the exhibition visitor who views the works chronologically, it introduces Hubbard and Birchler’s mode of storytelling:  a series of vignettes, each centered on a different individual recounting his or her experience of the subject at hand, interspersed with evocative passages of the camera exploring that subject, typically at a languid pace. 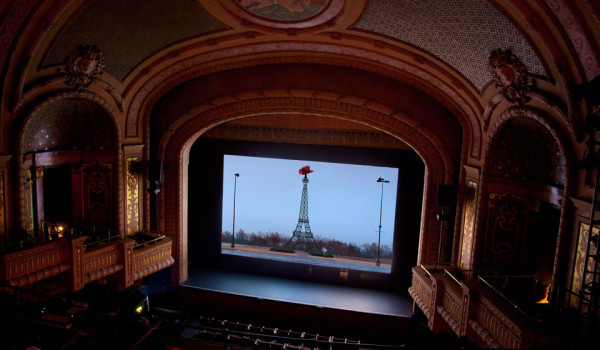 Grand Paris Texas is centered on the disused Grand Theater, in Paris, Texas, and the effect on that town of Wim Wenders’ 1984 film Paris, Texas.  It weaves together interview footage from a disarming cross-section of the local population, from the projectionist in the glory days of the theater, to the now-grown child star of Tender Mercies (who hailed from Paris), to a pair of teenagers who have never known The Grand as anything but deserted and rundown.  Second and third degree associations are brought into the fold.  A funeral home director’s mother was the organist during the silent movie days; the video spends time on his livelihood too.

The interludes between these diverse recollections are luxurious, indulgent affairs.  We see the film crew setting up their equipment–lights, cables, dollies, rigs, stands–all manner of grip gear whose function is opaque to a non-film crew viewer.  They move through the theater, now filled with pigeons and detritus, setting up shots.  We see the finished shots cut into these sequences, though not as much as we see their preparation.  It is all done voicelessly, the crew’s monastic reverence to the site reinforcing the pallor that time has already cast on it.

Of course, the “crew” are actors.  Their silence is scripted, though that seems funny to say.  This video is about the theater, and the local effects of Wenders’ film, but even more, it is a meditation on the construction of history, not as a scientific or professionalized pursuit, but as the accumulation of individual experiences, with all the fragility and contradiction that entails.  The interludes depicting the “real” theater are no less fragile and contradictory, being utterly bound within a set of stylistic choices that hide the structure as much as they reveal it.

Movie Mountain (Méliès) (2011) tells the extremely porous story of a mountain near Sierra Blanca where a silent movie was made in the 1910’s.  Barely anyone remembers the details about it, and we never learn the title.  This void is filled instead with visual lingering and off-topic memories.  Cattle ranchers plying their trade on the slopes of Movie Mountain, depicted in ravishing shot after ravishing shot, seduce us as cinematic substitutes for the story of what “really” happened.  No one can remember just why Movie Mountain should be so called, but this movie was made there, and the script-writing Hollywood-rejected cowboy we meet during one sequence finally gets his face on-screen after all.

The dynamic tension between history and recollection is teased out in this work, signaled right off by the use of a two-screen projection.  Hubbard and Birchler seize the visual, narrative, and technical possibilities available with this setup.  Sometimes we see a continuous image across the two screens; sometimes we see two different, but clearly connected, images; sometimes we see juxtaposed images whose connection we are left to surmise.  They play games with these arrangements.  What appears to be a continuous image is occasionally the result of two cameras, as a bit of brush shimmies in the breeze on one side, the other side still dead calm. 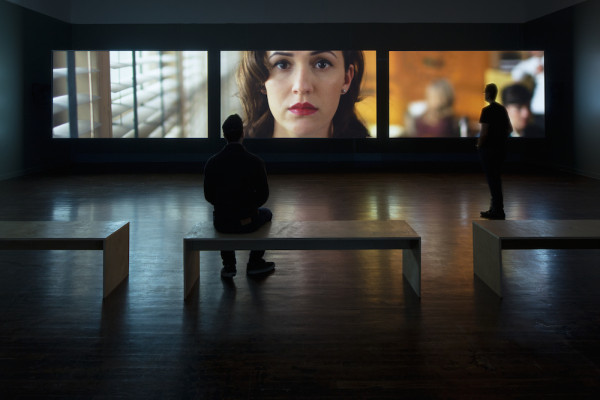 The evolution from documentation to dispersion is fulfilled in the last video, Giant (2014), which was commissioned by Ballroom Marfa.  It is shown in the largest space, on three screens that fill the long wall in the gallery.  When we see a continuous image across this expanse, the extreme horizontal aspect ratio calls to mind the epic grandeur of the eponymous 1956 film itself.  Hubbard and Birchler’s formidable technical prowess allows them to capture stunning shots of the landscape, sunsets, thunderstorms, even ants swarming a dead grasshopper.  The site of these natural wonders is an abandoned film set constructed by Warner Brothers for the original Giant.  Now it is merely a skeletal ruin perched in the landscape, an armature about which the degradations of nature continue unabated.

Its role as an armature is twofold.  It is a frame through which we see the landscape, in the present, and it is a relic, through which Hubbard and Birchler imagine the drafting of the contract between Warner Brothers and the land owner on which the structure was to be built.  Giant cuts back and forth between these two scenarios.  They introduce a new element that was absent from the previous two videos, historical reconstruction.  A secretary in a sunny office in February 1955 sits at her typewriter, consulting the shorthand on her notepad, typing up the contract.  We get extreme closeups of the typewriter mechanisms, the keys striking the paper, the carriage return; the secretary, all lipstick and eyeliner, smokes, is visited by a male supervisor, and gazes wistfully out the window for some reason.

Giant dispenses with spoken language altogether, and the convention of talking-head interviews.  There are no “real” people telling their stories.  The site of the historical movie is not defined by absence, as in the previous two videos.  Instead, the history is concrete and well documented, which seems to grant license to Hubbard and Birchler to push further away from narrative.  In this, they achieve fantastic visual pleasure with the landscape scenes in the present.  But they falter somewhat with the historical reconstruction.  There is not quite enough interest to it to sustain the 30 minute running time.  Gerard Byrne’s videos reconstructing seminal moments from art history handle the balance between veracity and sentimentality better, and with more commitment; viewers accustomed to the stylized obsessions of Mad Men will not be overly impressed by this 1955 office.

Finally, about the title Sound Speed Marker.  I’ve discussed mostly the things we see, but sound is hugely important to these works.  In each video we see shots of the boom mic, swathed in a “dead cat,” collecting sound in the field.  We hear amazing things, like a grasshopper’s legs tapping along a wood pole.  They assemble this audio as a landscape unto itself.  Approaching storms, raindrops on scrap metal, a ringing telephone, the gravel voices of the interviewees.  Those three words, sound / speed / marker, are a compressed version of the checks a film crew goes through before beginning a shot.  By making them into a title, Hubbard and Birchler direct our attention to the moment immediately outside the film.  They ask us to pay attention to the role that filmmaking plays in the construction of history, and then to go further and apply that idea more broadly.  Every history is built from stories, sometimes slapped together ramshackle, sometimes corporate and impenetrable.  Every history too, is in danger of decay, of breaking into lone planks that swing in the breeze, disconnected from context but never mute.