This is Part Two of a two-part dispatch on this year’s Marfa Myths, which took place over the weekend of April 12, 2018. Read part one here. 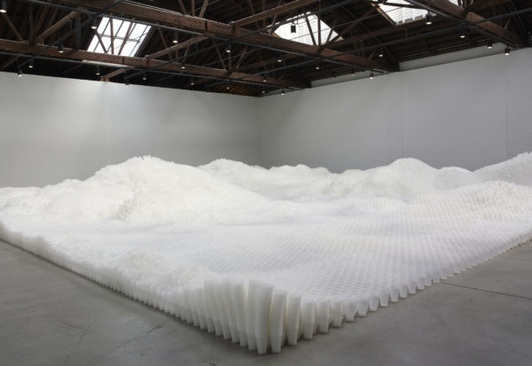 Next was the Ballroom Marfa opening of the massive, high-concept show Hyperobjects. Ballroom Marfa always goes hard with shows that are simultaneously scientific, philosophical, and mystical, utilizing the gallery’s outdoor space in visceral ways. In Hyperobjects, a collaboration between curator Laura Copelin and professor at Rice University Timothy Morton, Morton asks: “Where are we? Marfa, Texas, the USA, Earth…? When are we? This week? This year? Our lifetime? The time of capitalism? The time of humans on Earth? And, what’s more, who are we? Humans? What on Earth is humankind? Can we say we in a way that isn’t misogynistic or racist-or speciesist? How do we speak our agency in the biosphere?” 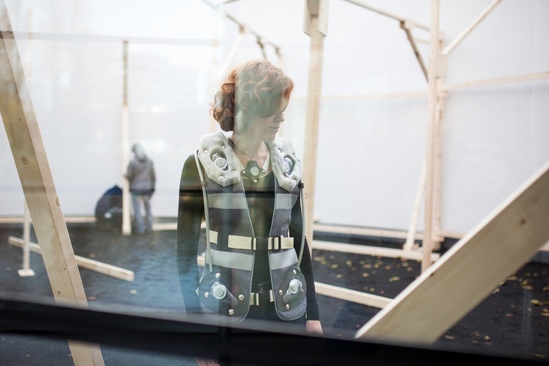 The works explore these questions in dizzying and exhilarating ways. Tara Donovan’s Untitled (Plastic Cups) uses disposable plastic cups to create a sculpture that resembles the topography of mountains, or waves in the oceans. The terrible suggestion is that perhaps soon the difference won’t matter — it will just be one rolling glide of plastic across the globe. Sissel Marie Tonn’s piece is so intricate… well, let’s go to the catalogue: “Tonn installs a new configuration of her Intimate Earthquake Archive, allowing visitors to wear vests that transmit seismic data from man-made earthquakes caused by gas drilling.” Nance Klehm “digs holes in Ballroom’s courtyard: burrowing, creating heaps, analyzing soil, cataloging detritus, and giving visitors an opportunity to be physically immersed in earth.” At sunset of the opening a woman, in deep repose, stood by one of the transmitting stations wearing the vest. A current throughout the exhibition is the processing of ecological horror into something transformative, a cathartic awakening of sorts. The pieces have a jolt, like an alarm, but also like a white noise machine — the ineffable tide of awareness and unease.

The Center for Land Use Interpretation (CLUI) had a startling and spectacular interactive piece of satellite shots of massive and generally bleak facilities across west Texas: detention centers, refineries, treatment plants. They look so neat and beautiful from the sky, like cities designed by Le Corbusier. But we all know the grit on the ground, the way the earth is pierced like stitching in leather, and the mountains scalped.

Hyperobjects, like most of the recent Ballroom shows I’ve seen, seeks to bear witness — to the land and what we have deemed “civilization,” and the often horrific and sometimes hauntingly beautiful collision between the two. Perhaps it is the energy of the land that results in the art out here reflecting the truth: that despite the surreal large skies, the clouds like plumes from hidden smokestacks, this is the real, and the cities and suburbs are the dreamtime. This is where the bones and arteries of the world course through the sand. 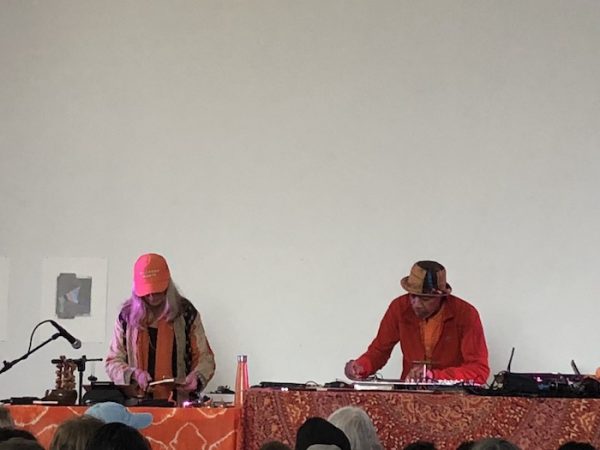 New-age ambient legend Laraaji was originally supposed to play at Ballroom, but he understandably balked from executing what is essentially a meditation session in 50-mile-an-hour winds, so the show was moved to the reliable gallery Wrong Marfa. To a packed room (many people couldn’t get in) Laraaji (originally Larry Gordon — in a brilliant name flip he turned Larry G into Larry with the Hindi honorific “ji,” so basically “honorable Larry”) and his ride-or-die boomer partner both in burnt orange track suits created a field of pure serenity. Laraaji would pluck his electric zither and blissfully say: “I walked through the garden of now and eternity was everywhere. Ha ha ha ha.” Laraaji is a practitioner of laughter meditation and his laugh is its own ecstatic instrument, absurd and delightful and programmatic in that it makes you laugh upon contact. 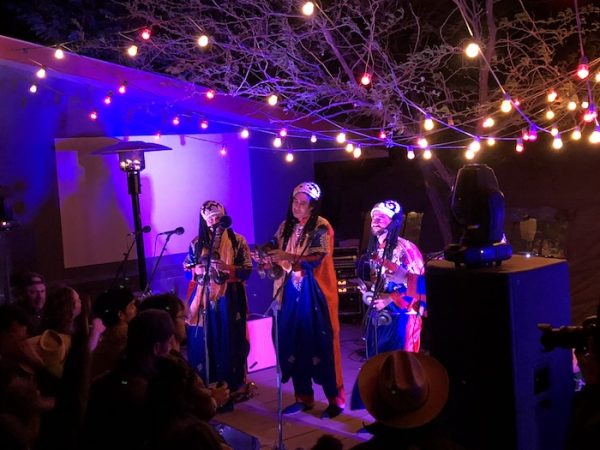 We skipped the excellent Portland electronic ambient band Visible Cloaks to regroup for a minute at El Cosmico, before the two after-party performances held on the stage there. The wind was so strong our tents bowed and fluttered like laundry on a clothes line. Innov Gnawa performed again, this time in ceremonial dress. The jeweled stars overhead and high wind gave their performance the mythic quality of a fable — the masters of Gnawa sang and saved the town from a dust storm. 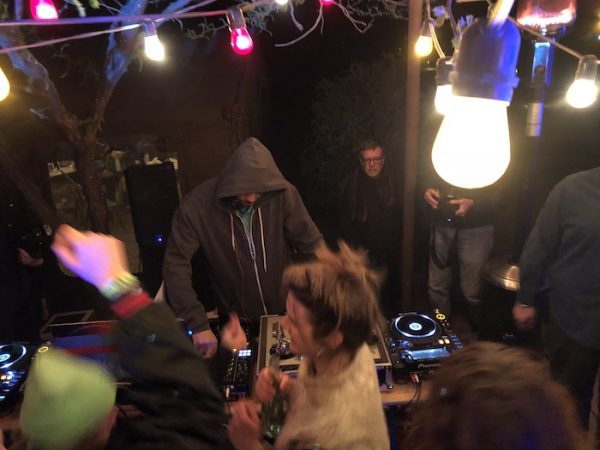 Next was the Detroit legend Omar S. A king of Midwestern house and techno, Omar — his hoodie pulled low, his Case Logic booklets filled with CDRs of unspeakably rare edits — immediately turned a windy night into the rarest of things: a true party. People danced on the picnic tables and flooded the stage so that Omar was obscured, his head down, driving the beat like a barge. At one point a ripped, shirtless man in a beret began to frame up. We had reached the Final Level of Party: spontaneous vogue. Once Omar had to stop (the 1 a.m. cutoff is a kind of a drag, but then again, who knows when these things would end without it?), my euphoria subsided, and I realized, in terms akin to a helicopter pilot telling a diplomat it’s time to leave Saigon NOW, that I needed to sleep. “I have to go to bed right now,” I croaked to Cruise G. “Me too,” he replied, and we hugged, and my night came to a close.

After patching up with several cups of coffee and a Dr. Bronners shower, I headed out with the gang to the Chinati Foundation’s Arena for a performance by Buchla synthesizer legend Suzanne Ciani. With everyone seated on the floor, Ciani, a kind of cosmic mom, explained in detail her quadrophonic set up. “The four-channel speaker configuration creates a center-point, where Laraaji is standing as he knows to be,” Ciani noted admiringly as Laraaji nodded and smiled. Ciani’s piece was like vibrational therapy — shimmering waves of sound and tones that felt like acupuncture. The Buchla is a complicated, difficult device and seems almost a sentient creature, and if startled would short out, and Cianni had full empathic mastery. Afterwards, I felt as if I had emerged from a Russian spa or deep-tissue massage. Much of the festival felt like a therapeutic retreat in this way. 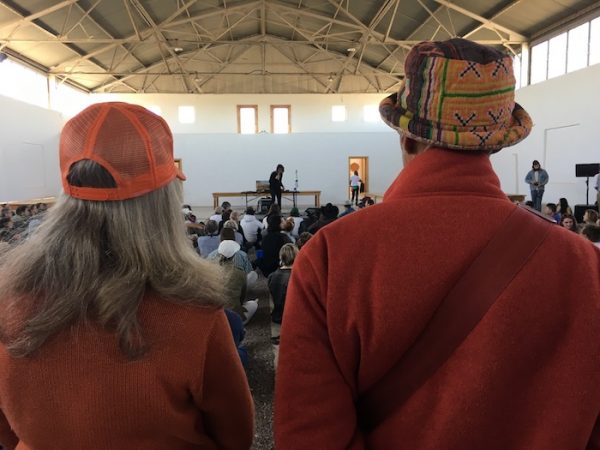 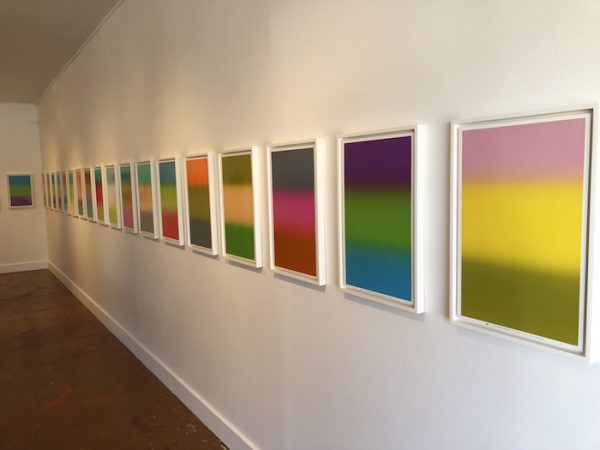 I popped back into the festival headquarters to get the second of the Imaginary Concert posters. There was an exhibition by Peter Coffin, inspired by the iconic posters of LA’s Colby Poster Printing Company, who printed the tricolor gradient posters from 1946 until 2012. There were two different press lineups where you could roll your own poster after choosing one of the three color gradients: one by the writer-poet Eileen Myles (“Robert Johnson… Arthur Russell on a ferry between Belfast and Liverpool, August, 9 pm”) and one by Marfa icon and freaq Mark Scott (of the Desert Music Festival, with bands such as Rashtag at the Paradise Room, 606 South Bone Street…). Because you ink-rolled the posters yourself, the ink was wet and you had to hold the poster on its edge as it pulled in the wind. A couple of times I almost lost them and imagined them blowing to some other small town to be discovered with rage and bewilderment by the local sheriff.

There was a nice lady in a red jumpsuit with the Windows logo painted on her cheek offering facepainting. In a moment of insouciance I asked her if she could give me a Kokopelli. “Of course,” she said, and proceeded to draw a perfect pelli straight from the dome. Immediately after The Party Dad sat down, and I knew based on his sizeable back-piece tattoo that reads “color changing dragon” in Chinese characters, that he would ask for a chameleon. In the midday sun, he happily chatted up a storm about good chameleon stewardship. 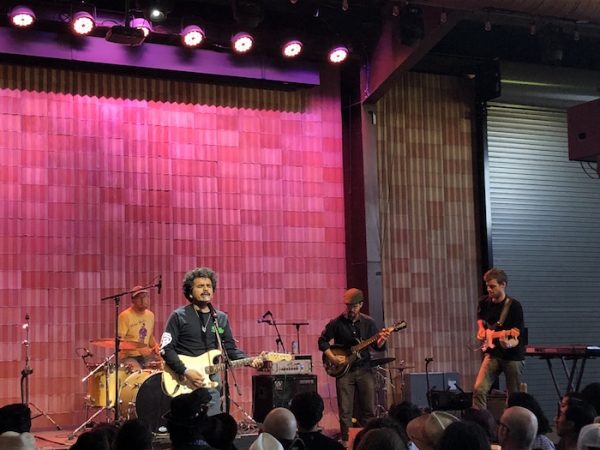 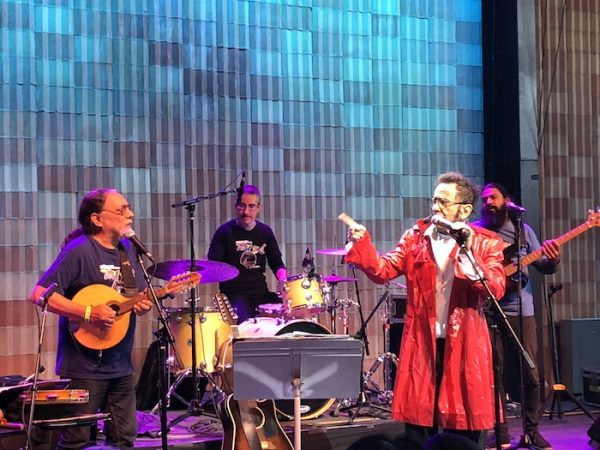 Over at the Hotel Saint George’s performance space, Roberto Carlos Lange (known as Helado Negro) performed an expansive set with an ensemble. Resplendent in all black with a trim vest, Lange had a loose showmanship, gliding across the stage like a young Bryan Ferry. Next was the legendary Tropicalia prankster Tom Ze. Now 80, wearing a red leather trench coat like a cyberpunk Serge Gainsbourg, Ze’s performance was euphoric, perverted, and Dadaist. He would suck on his middle finger during songs, and interrupt to read some materials and then seemingly not know obvious words (que Jayzeus? he asked quizzically at one point in reference to Jesus). A few in the gang found it a bit much, but after a weekend of sincerity, a trickster spirit was welcome. 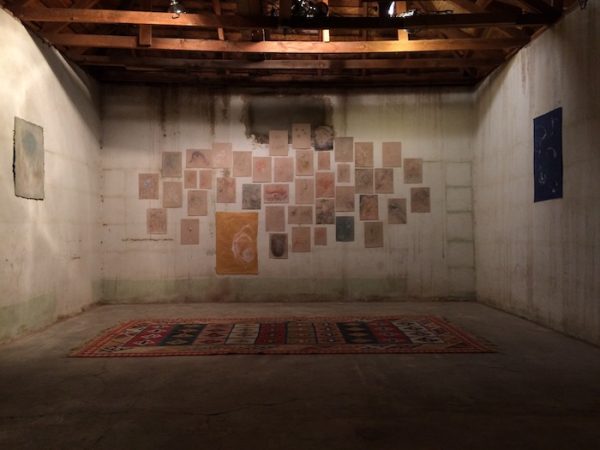 After a brief respite at the Lost Horse saloon, we headed over to local artist Josh Jones’ show of drawings, held in a simple cottage off the town’s main drag. With a beautiful patterned rug on the stone floor, the show configuration took on the aura of a shrine. The drawings have a blurred symbolism like cave paintings from an unknown tribe. While I stood with Cruise G during the magic hour outside the show, a pickup truck drove by filled with children in the bed. “Let’s get em!” one of them said, and a wave of Nerf darts arced towards us under the pink backlit sky.

Back at the Capri, a solid lineup of indie-rock bands played: Circuit Des Yeux, Amen Dunes, Bradford Cox and Cate Le Bon, and finally post-punk legends Wire. It was a divisive set, with the detractors finding it a combination of Judd Apatow’s This is 40 and Lou Reed’s Metal Machine Music. I, at the magical centerpoint, let it wash over me, and found their driving, clanging set as invigorating as a cold waterfall on the neck and shoulders. 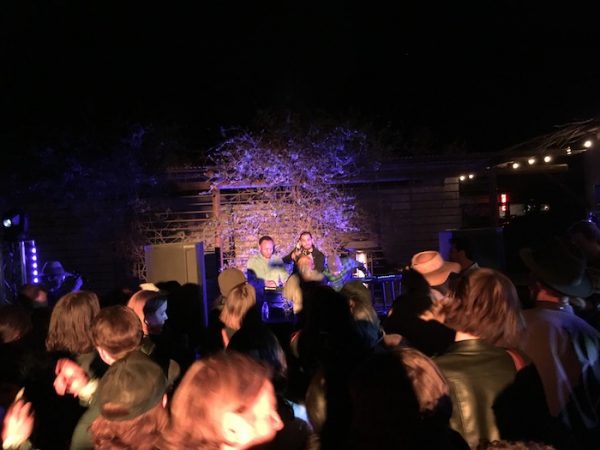 Wire finished around midnight and I was worried that Equiknoxx, the Jamaican dancehall futurists, wouldn’t get to play. But they started immediately in a surprise outdoor set up, and it was just about the hottest shit I’ve ever seen. With the incredibly charismatic female toaster Shanique Marie, who possessed an untouchable cherubic swag, the group’s smudged and infectious riddims turned the faded, cold crowd into a bonfire. “Eat, sleep, dub, repeat,” Marie sang, and the crowd sang back.

Back at El Cosmico we had a night cap in the outdoor kitchen with some nice folks from Tucson who had driven in on a whim with no knowledge of the festival, and walked around town in a daze, watching impossibly fashionable people’s straw hats blow away from them. The next morning we had to leave early to take The Party Dad to the airport and I, horrifically, had to go to work. An ex-military dude with aspirations to run a hipster army surplus store happily took whatever supplies we wanted to leave behind, and began prattling on dubiously about finding used needles around the campsite. It was time to leave. One mild speeding ticket, the good omen of seeing a little ripper in a Slipknot shirt at the gas station, and six hours later we were back in San Antonio. I washed the dust out of my hair and headed to work. Next year I’m talking Sunday and Monday off. Respect the myth.