Greetings from the Land of the Sun: Carolina Caycedo and David de Rozas’ “The Blessings of the Mystery” 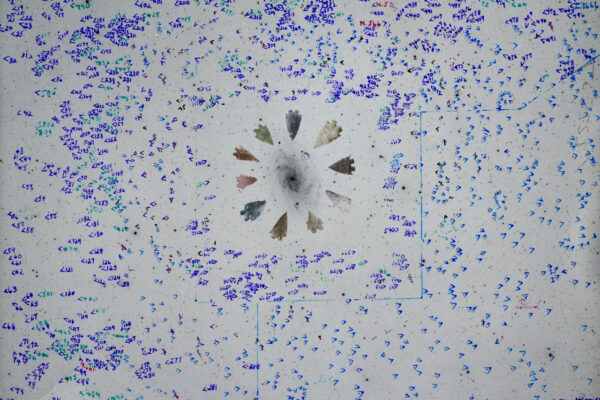 In The Blessings of the Mystery, on view at Ballroom Marfa, artists Carolina Caycedo and David de Rozas present a series of illustrations, collage works, sculpture, and film that examines the wide-ranging effects of present-day land use in West Texas.

Blessings started as a conversation between Caycedo and the show’s curator, Laura Copelin, with regard to the artist’s ongoing project Be Dammed, which looks at the social and environmental impact of river damming in the Americas — which then led to the topic of the Amistad Dam on the Rio Grande near Del Rio. Prior to the dam’s construction in the late 1960s, the area boasted an extraordinary abundance of prehistoric rock art and artifacts, much of which was damaged or destroyed with the formation of the Amistad Reservoir.

Carolina and her husband David, whose own work explores cultural memory and identity, decided to delve deeper into the stories of West Texas, from its Indigenous history to the region’s infrastructure and industry. Over a period of four years, they made multiple visits from their home base in Los Angeles: conducting research, connecting with local communities, tapping into an epic narrative that not only reflects their own findings, but what is found in the landscape itself. 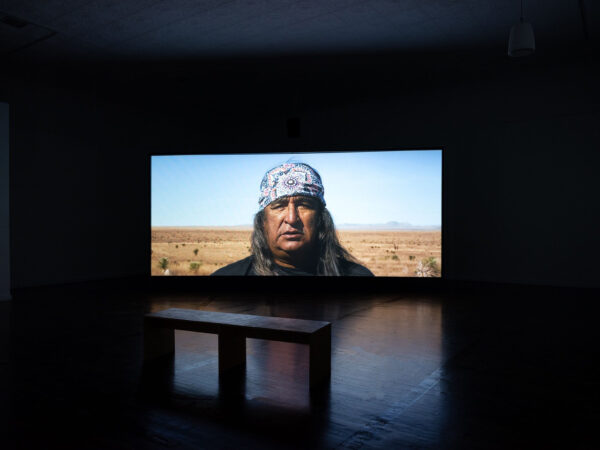 Installation view of “The Teaching of the Hands,” 2020, digital video with surround sound: 47:17 minutes, from “The Blessings of the Mystery” by Carolina Caycedo & David de Rozas. Courtesy the artists and Ballroom Marfa. Photo by Makenzie Goodman.

De Rozas, an experimental filmmaker, and Caycedo, a multidisciplinary artist, produced eight works for the exhibition; pieces that interconnect and culminate with The Teaching of the Hands (2020), a 47-minute film narrated by Juan Mancias, Chairman of the Esto’k Gna, Carrizo/Comecrudo Tribe of Texas. The single-channel film, which is part dramatization and part documentation, uses Mancias’ voice and knowledge to catch the viewer up on the last 4,000 years in Somi Se’k — “The Land of the Sun” — aka Texas. An elongated screen transports the audience into the desert panorama just beyond the gallery’s walls, with scenes of rugged beauty and modern ingenuity playing off one another evenhandedly.

Mancias is both poetic and pragmatic in lining up ancient philosophies with present-day realities: “When you’re walking here, you’re walking on my ancestors,” he says, later adding: “We don’t recognize the border because they dropped it on top of us.” The they Mancias is referring to are white settlers, which he notes can be seen in the area’s ancient murals, long before Europeans ever set foot in the New World. From early exploration to oil and energy production, Mancias expertly braids the past, present, and beyond until they are indiscernibly one. 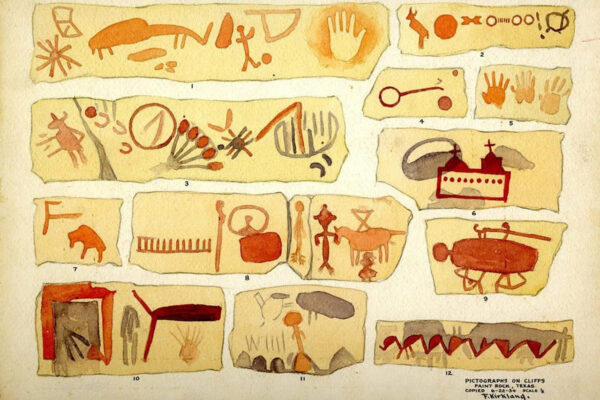 Images in the film appear elsewhere in the exhibition, further emphasizing the cyclical repetition of nature. Actors portraying land surveyors (from a century ago as well as today) are interspersed with apocalyptic scenes of engineering marvels, introduced onscreen with the same cinematic queasiness as Koyaanisqatsi; at one point, footage from the McDonald Observatory in Fort Davis turns a massive instrument measuring the galaxy into a monster ogling the Milky Way. Another sequence shows a raging gas flare from an oil refinery, before cutting to a prehistoric painting depicting a flame; throughout the film, and throughout the show, chasmic timescales come together without any hesitation.

In Ballroom Marfa’s Center Gallery, drawings of patented fence designs (“Texas Improvements”) from the past century face a wall of archival photographic collages. Two of the archival works include pictures of the Rio Grande delta — that important archaeological site — collaged with knotted jute cord, as if still tied to the memory of time and place. A third photo, aptly titled There Are No Lone Stars (2020), comes from the Harvard Astronomical Photographic Plate Collection, and shows a cosmic cluster of vastness centered by a nucleus of arrowheads. From the ancestral to the celestial, these photographs and fence designs coolly compare notes on infinite mystery versus “inexpensiveness, durability, and efficiency.” 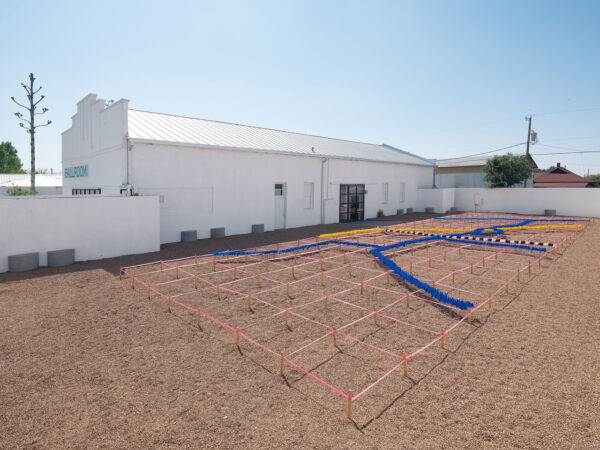 Outside in the courtyard, a ground installation representing a scaled map of Marfa is marked by various-colored flags along a grid, signifying the railroad, arroyos, and pipeline that cut through the region. Halving and Quartering (2020) is inaccessible and inscrutable, physically (and philosophically) reinforcing the dry, technical nature of engineering. To that point, the South Gallery showcases an elegant floating sculpture of land surveying tools strung on clear wire. In Measuring the Immeasurable (2020) unremarkable objects (tripods, prism poles, plumb bobs) suddenly seem remarkable — if not risky — when held up to the light.

Around the corner, ten original watercolors from Forrest and Lula Kirkland (the other husband-and-wife artist team in Blessings) showcase examples of prehistoric rock art from the Lower Pecos Canyonlands, now largely covered by the Amistad Reservoir. The Kirklands worked steadily during the 1930s to document these pictographs in their own impeccable paintings and sketches. The watercolors on display (scaled copies of much larger murals, some reaching 30 feet in height) are referenced in the film, and seem emblematic of the ongoing schism between preservation and privatization. 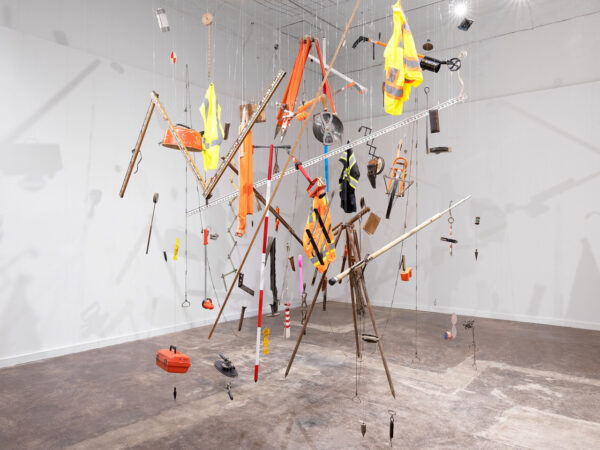 The Blessings of the Mystery is concluding its three-city tour in Texas at Ballroom Marfa (it also traveled to Austin and El Paso), which is fitting, since its many motifs — both seen and unseen — reflect the world just yonder. In a postcard collage series, Greetings From West Texas (2020), the region emerges as a strange paradise with melded imagery of earth and sky, oil fields and industry; a mythical place where cactus blooms mimic smoke plumes, and mountaintops mirror the Alamo.

But this is no alternate reality — it’s Texas. And to didactically drive home that point, a colorful wall-sized illustration recaps the whole shebang. Somi Se’k (The Land of the Sun – La Tierra del Sol) (2020) maps out the many natural and man-made wonders of the region until it is one big, happy calamity: from the Permian Basin and its pipeline pumping the goods east toward Corpus and Houston, to the pair of bronze eagles standing guard on the dam at Lake Amistad — Spanish for “friendship” — at the U.S.- Mexico border. Halving and quartering, measuring the immeasurable: Greetings from The Land of the Sun.

Blessings of the Mystery is on view through September 4, 2022 at Ballroom Marfa.