Perhaps it’s my entry into middle age, but most music festivals now seem to be a horrifying simulacrum of modern life: you’re trapped in a heavily surveilled “pen,” everything is expensive, and divorce-wave bands like The National and LCD Soundsystem incessantly bray over the fields. Even if someone gave me free VIP tickets to Coachella and a terrycloth jumpsuit emblazoned with the word “Hyphy,” I wouldn’t go.

It wasn’t always this way. I recently watched for the first time the D.A. Pennebaker documentary of the 1967 festival Monterrey Pop, and was most struck by the reverence and rapture of the crowds during the performances. As Ravi Shankar seems to catch a silverfish in the clouds during his raga, you can feel the bliss and delight of the performer and the audience appreciating the elusive rarity of, in the truest sense of the word, an event unfolding.

Marfa Myths feels elusive and rare, and after going two years in a row it has become to me what I imagine Burning Man is to a burner who runs a bulletproof coffee rickshaw in Santa Cruz — I get to be with my people and I look forward to it all year.

This year, in part due to relentless evangelizing about the festival by me and my trusty photographer Twisted Sam (TS) — which resembled a Tom Cruise rant to Bradley Cooper about KSW (Keep Scientology Working) best achieved through free climbing — we had a much larger crew. They included, in addition to TS and myself, Twist (this is a different person from TS), The Party Dad (so known for his meticulous preparation and dad style), The Toad Shaman (self-explanatory), and Cruise G (for his resemblance to a Cocktail-era Tom Cruise), as well as a friend turning thirty and the associated partners, friends, and acquaintances.

TS, Twist, The Party Dad, Sam, myself, and The Toad Shaman set out on Thursday morning from San Antonio, TS and Twist in the latter’s snow white ’90s Suburban and the rest in my dadrock blue Ford Edge. The Party Dad sat in the back vaping and listening to music on his noise-cancelling headphones like a sullen teen moving to California just before his senior year of high school. The Toad Shaman and I had a productive brainstorming session on the drive out, which included such gems as: A wine bar in Marfa called Marfa’s Vineyard, a DMT/Ambien shot called SNOOZ (in opposition to the 5-Hour ENERGY drink) that would put you in a deep slumber for fifteen minutes, and a nu-metal bar for the Pappas family restaurant empire called Pappas Roach. You know how the drive goes — the limestone gets carved, the trucks get murdered out with gun racks and running boards. There is the moment of euphoria turning onto Route 67. Texas is a country and you have entered the high desert. 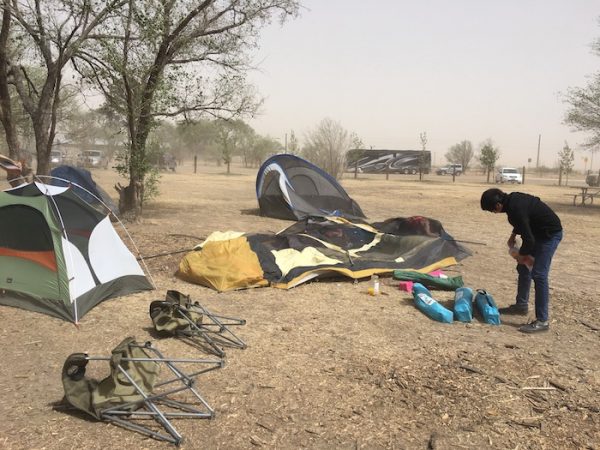 The X factor this year was extremely high winds hurtling through the region like malevolent djinns. Upon parking at El Cosmico to camp, dust twisters would spontaneously conjure themselves into existence and skirt down the road before blowing apart and browning out the horizon. Setting up my tent resembled a Buster Keaton comedy of flapping nylon. It reminded me of the 1928 silent film The Wind where a woman is driven mad by desert gales. Even though the gusts made the trip difficult and often absurd, it also felt fitting — these are dark times and the wind is howling. 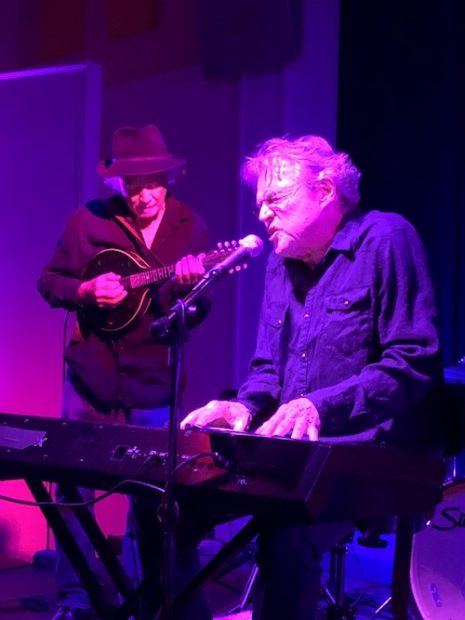 After finally staking camp and pounding a couple stiff mules we made our way to the Marfa Visitor Center for the show by the great writer, sculptor, and art-country musician Terry Allen. Allen’s band lineup was as clever as his work: Allen on voice and keys, an ace mandolin player and fiddler, and Allen’s sons on accordion and percussion. The keys were ghostly and vaguely like karaoke interlude music; the fiddler and accordionist danced together and the percussion was often hand drums. Allen’s voice was full and reedy and the show had a funkiness akin to a countrified Leonard Cohen’s I’m Your Man. One jarring thorn was the presence of a pack of bros from Alabama who seemed “glitch-in-the-matrix” out of place around the lithe, gentle people from LA, New York, and Austin, who generally wore flowing clothes and smelled of myrrh. These southern boys had gotten flights on miles and had had a million Jack and Cokes on the plane. No one in Birmingham even knows who the fuck Terry Allen is!, they bellowed. They were dressed like divorced dads hounding a Brad Paisley rodeo concert. When Terry Allen sang a satirical line in Yo Ho Ho/Big Ol’ Boys about being ‘large adult white sons,’ they let out an epic bro yawp, missing that the song was about them, not for them. This soured the vibe a bit — a reminder that in these wet, bleak times, it’s just about impossible to make a Shangri-La in the mountains. The good vibes were resuscitated by an effervescent drag show which I only stayed for briefly before the toll of the drive hit and I felt as exhausted as Julianne Moore in Safe.

After a good night’s rest (I sleep well in west Texas), I made a late breakfast for the crew. The wind blew eggshells away like paper origami balloons, and our friends’ 12-person tent flattened like a cut bouncy house. I kept chasing after my hat. Somehow I felt unperturbed and easy. Around noon we made it to the Marfa Radio Station which served as the headquarters for the festival. Festival sponsor Mexican Summer had an elegant pop-up shop that included such treasures as a maroon shirt for the obscure Swedish psychedelic band Träd, Gräs & Stenar embossed with a wavey Yin-Yang symbol. Several of the bands booked for the festival played bonus shows outside, interspersed by ace DJs, and the Austin record-store legend End of An Ear had a pop-up throughout the weekend. We walked up on the first performance of the Brooklyn-based Moroccan band Innov Gnawa playing a sacred form of north African music called Gnawa that consists of a minimal stringed lute called the hajhuj, and qraqabs — iron castanets — and overlapping vocal harmonies. The music was hypnotic and meditative, and watching them on a sunny, windy day, with one of the qraqab players free and easy adorned in jorts and a hat that said SOULROCKER in Latin Gothic script, I felt something approaching my conception of nirvana. 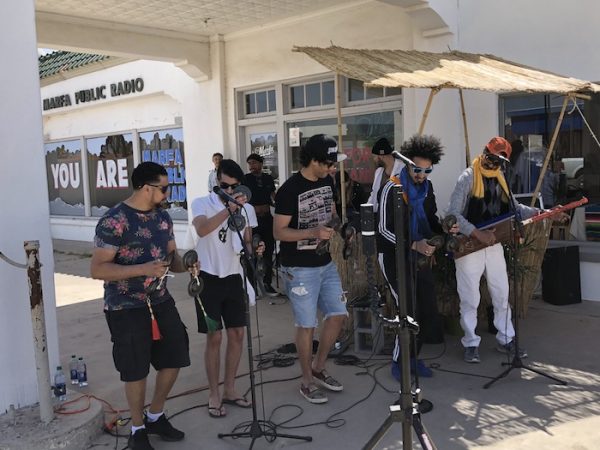 Marfa Myths is a tote-off. By that I mean everyone brings their hip tote bags to swing around high noon. Amongst the hip totes I saw: One that read Endless Bummer, one that said Anything You Can Do I Can Do Bleeding, totes for the great New York record stores Two Bridges Gallery and Academy Records, totes that had the faces of Tour de France winners from the ’80s in a pleasing, cubic pattern; totes that said Pangea but had a marijuana leaf of archipelagos over a globe. All to which I respond: “Warriors… come out to play-ay… ,” because I brought my Ingmar Bergman tote I bought from the Film Forum in New York, which depicts the grinning little devil Bergman as a stick figure hovering over his signature. He is my travel homie and ensures I have a good time. 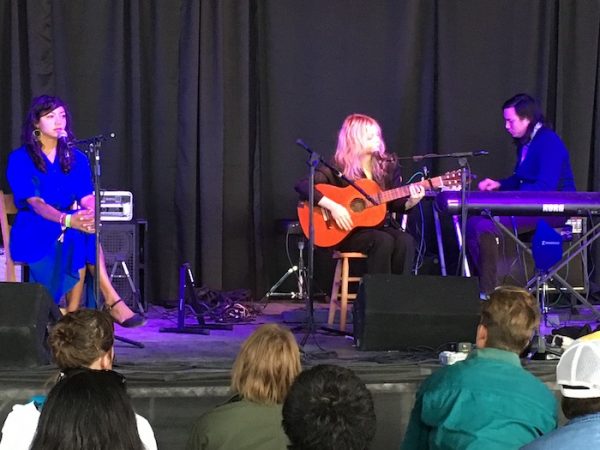 We headed over to the Capri, across from the Thunderbird hotel, for a pastoral afternoon of concerts. The shambolic, charming folk rocker Ryley Walker had the crowd in stitches with a riff: “I usually have a guitar tech that throws me axes like Bruce Springsteen, but he’s at his stepson’s t-ball game… . I’m sweating like a dad at a t-ball game right now. Just smoking behind home plate, saying horseshit around kids.” The ethereal singer-songwriter Jessica Pratt, in the lineage of Sandy Denny and Julee Cruise, played a lush, quietly expansive set with a second vocalist and synthesizer, the house band for the Black Lodge. 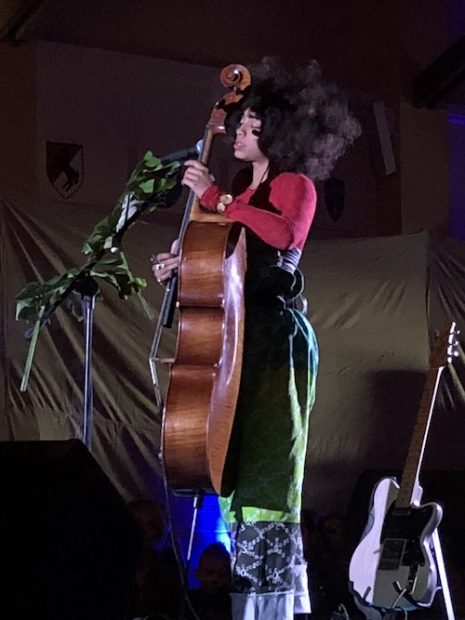 One of the best things about any music festival is seeing a show by someone you know nothing about who blows you away. This is Myths’ strength. I was most excited to see Tom Ze, Omar S, Laraaji, and Equiknoxx; I was not familiar with Kelsey Lu, and she delivered perhaps the most astonishing performance of the weekend. Dressed splendorously in lush, angular clothes by the collaboration of no sesso and Come Tees and playing looped and delayed cello and electric guitar with a beatific voice, Lu brought the crowd, including myself, to tears. “I’m not over you, I’m just tired of these shades of blue,” she crooned. How real is that?

“The wind blew eggshells away like paper origami balloons, and our friends’ 12-person tent flattened like a cut bouncy house.” — why I love ya, Neil.

Happy to have jump started the Toad Shaman…

” …a pack of bros from Alabama who seemed “glitch-in-the-matrix” out of place around the lithe, gentle people from LA, New York, and Austin, who generally wore flowing clothes and smelled of myrrh.”