Curdin Tones: The Wide and Open at The Lumberyard, Marfa

Curdin Tones, a Swiss artist living and teaching in Amsterdam, spent four weeks in Marfa as an instructor and researcher with Summer School Marfa, a program that brings students to Marfa for “studio fieldwork” organized by TAAK, a Dutch collective. He concluded his residency with a one-night exhibition at The Lumberyard. Tones is a sculptor, but the works presented here belong to the “expanded field” of sculpture, theoretical shorthand for artistic activities that otherwise don’t fit into established categories. 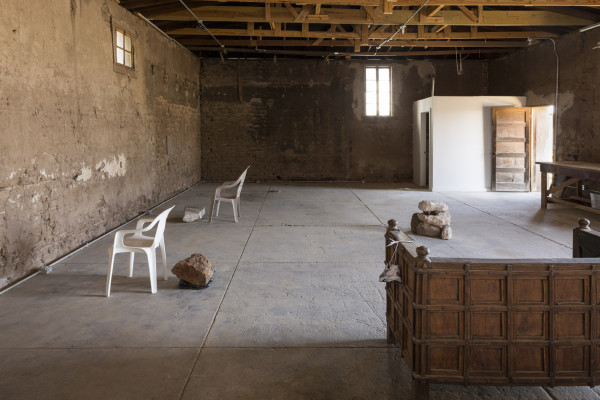 The Wide and Open doubles back on the concept of the expanded field, literally. His pieces either provide an open space for the viewer to enter the work, or they squeeze all the volume out of the space where the viewer might expect to be. 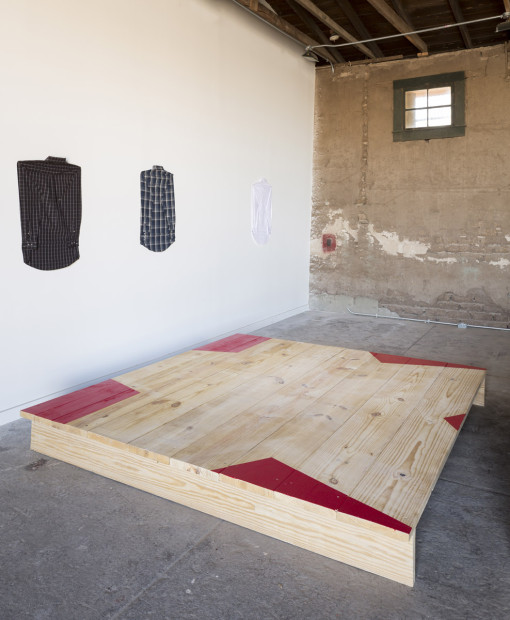 The show included four works of the open-space type.  The largest was a platform made of 2×12 pine boards (the same type of common lumber that Donald Judd used to build his own utilitarian furniture), painted red, with a large five-pointed star of raw wood in the center. The star’s five points extend beyond the edges of the platform. The platform was an invitation to step into a symbolically charged zone, but no activity or awareness is prescribed by this space. What one does upon arriving there is one’s own business.

Two more works extend this invitation, without clarify its intent. Tones positioned two molded plastic chairs – common ones likely to be found on a backyard patio – facing the exposed adobe wall of the exhibition space.  On the floor behind one chair, a pair of shoes is smooshed flat under a large rock. In front of the other chair is a fragmented slab of concrete, placed so that the sitter can place his feet on top of it, reversing the action of the crushed shoes.  These two pieces demonstrate excellent sensitivity to the interplay of their materials, and they make it quite clear that the viewer needs to complete the works by actually sitting down.

Sitting down, one’s status as a viewer is compromised. How long to stay in the chair, facing the wall, like a disobedient child?  Has the sitter been absorbed by the work in some way, as if the other viewers in the space can now see the work fully, more fully than the sitter? The same action applies to the platform. The wide, low pedestal pushes self-consciousness on us, as if our subjectivity is on display and thus open to judgment. 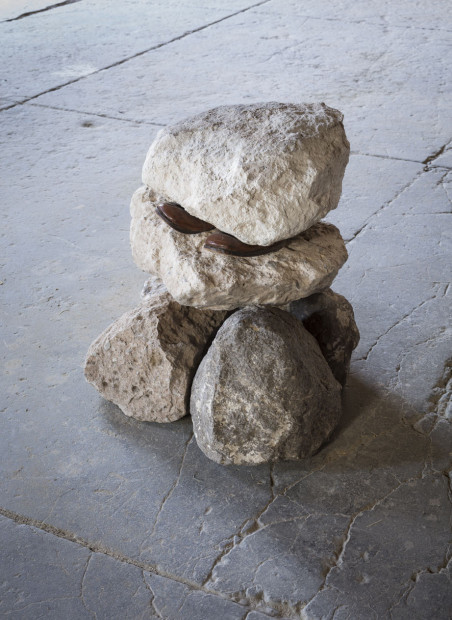 Self-consciousness is constricting, and that sensation points us to the remaining works: the pair of shoes crushed by a lone stone I’ve already described, another stack of stones with another pair of flattened shoes, and, nailed cleanly to the wall with their back sides visible, three shirts, ironed into geometric icons. In all these pieces, the physical space of the human body is evoked and then compressed until it is emptied of volume. Where there should be a person, there cannot be one.

Counter-intuitively, the cumulative effect of these invitations and denials is empathic. The show’s core spirit is generous, acknowledging that the fight to maintain the specificity of one’s self is a constant negotiation. Tones offers us entry into situations in which we transfer this hidden fight into a public space. The conditions created by these works, and the gesture of their invitation, is expansive after all.

Curdin Tones, one- day show, The Wide and Open was on display at The Lumberyard, Marfa, on June 9, 2014