Nina Chanel Abney at The Modern Art Museum of Fort Worth 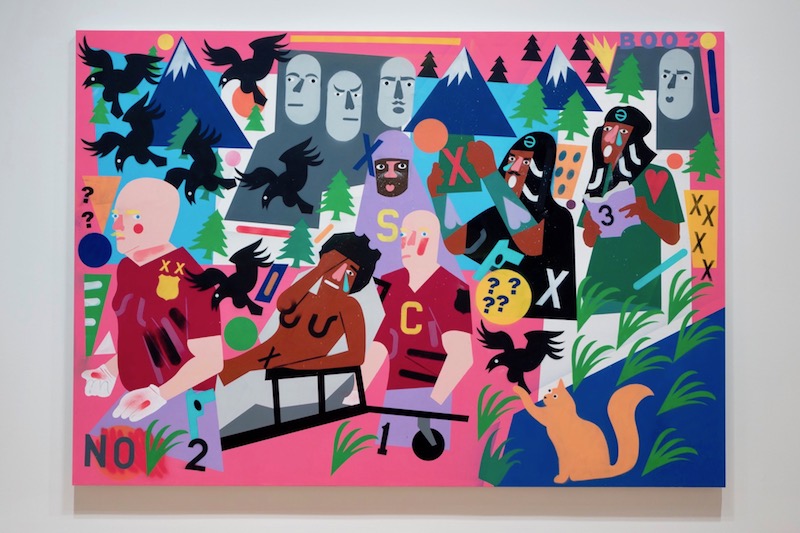 Chicago-born, New York-based Nina Chanel Abney arrives in DFW under the auspices of The Modern Art Museum of Fort Worth’s FOCUS series, a year-round (with summers off), up-and-coming spotlight featuring three artists per season whose names go in a hat toward an acquisition decided upon and sponsored by the Modern’s Director’s Council patrons. Like past FOCUS shows, Abney’s works are staged in the back first floor gallery, her three massive paintings Hobson’s Choice, Untitled, and Black and Blues, all completed in 2017, filling much of the modest space. Her FOCUS thrills and intrigues, but FOCUS’s framework comes to fail Abney eventually.

Associate Curator Alison Hearst asserts that the Modern typically employs a less is more approach to hanging works (see Ron Mueck concurrently upstairs for a timely demo), but this totally tasteful philosophy left me thirsty. If the works are large format, is it really unfair to previous FOCUS shows to switch to a larger gallery? Three works? Carroll Dunham has ten paintings hanging in the next room and there are, what, seven Warhols in the gallery after that? Those aren’t autonomous shows!

The Modern Art Museum of Fort Worth has previously recruited for FOCUS artists ranging from Brooklyn-based Katherine Bernhardt to Brooklyn-based Katherine Bradford. With an upcoming focus on Kamrooz Aram, and Bradford in the mix, my money’s on an Abney acquisition this season. I saw her work in 30 Americans in 2014 at the Contemporary Art Center New Orleans alongside Kehinde Wiley, who still trumps Abney in fussy plant depiction. Whatever criteria merit a FOCUS show, Abney’s somewhat cramped colossi underline an elimination of risk on the part of the institution. Her FOCUS plays too well to not wonder what a grander commitment on the part of the institution might look like. Still. Such dense subject matter is heavy lifting and Abney carries it all with aplomb. It burns a bit to call a three-piece show “slick” but that’s what it is and maybe that’s enough. 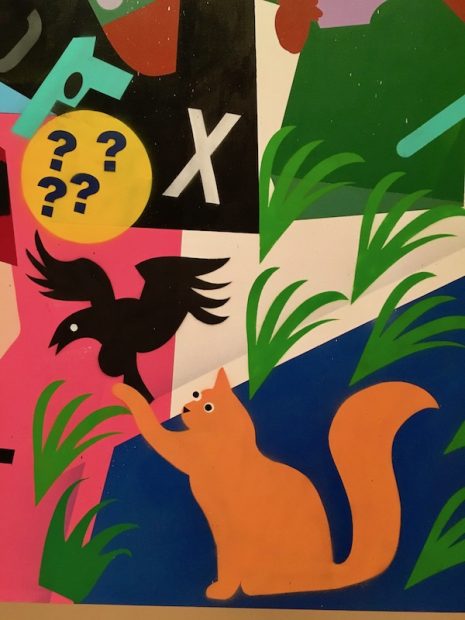 With Abney’s FOCUS comes perhaps more rigorous study on the audience’s part. In Abney’s work, it’s as interesting to find nods to Picasso as it is to the street artist Invader, but influences are hardly headlining. This is Abney’s own language. In Habeas Viscus, Alexander G. Weheliye admires black feminist theorists’ commentary on the way “black people appear as either nonhuman or magically hyperhuman within the universe of Man,” though I wouldn’t reduce Abney’s output to this philosophy alone.

In a dazzling array of familiar and fiendishly clever motifs, Abney’s troops burst through the wall of our (individual, collective, African, American) subconscious. Satisfying answers simply don’t arrive promptly, and, in as little a cynical way as possible this must make her dealers happy. The paintings in Fort Worth hang like a piñata for collectors with much wall space and much time to mull over Abney’s punctuated figure work laden with meaning hidden under, trapped within, and folded over the top of itself like the layered beats inside a ’90s house track. It’s hard to describe and probably even more irritating to read about. You have to linger with these ones. 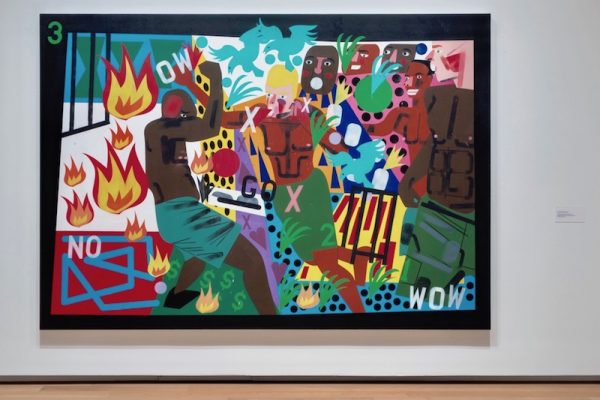 Conflation is a repeat buzzword among Abney press releases and I’m jumping on the bandwagon. There are no easy answers here; like life, maybe even no answers at all. Hobson’s Choice (an idiomatic choice between something or nothing) might offer the show’s clearest look at the mechanisms on display. Who are the combatants? Where do they fight? These questions are just tip of the iceberg.

A pair of bloodied fighters face off, both black-bodied, but one with a white head, triggering a fidgety cycle of guesswork for the viewer to process. Musculature is rendered in what seems to be those spray-stenciled parenthesis used in construction sites (if those exist). Here they form abs. And, like ’60s Batman, the text: NO, WOW, GO, and OW punctuate the frame. Flames, barred windows or gates indicate cellblock riots. Shadowy folds in boxing shorts could be modeled after iPhoto thumb-drags.

A colorfully adorned trio (elders? sangomas? ghosts?) watch from behind, one shocked, the second seeming to win a bet, the third mulls matters elsewhere. A second white-headed black body observes from the perimeter. A guard? A referee? It’s so messy, I shan’t dip my toes too deep lest I indict myself. Really, no one is safe to assume and in that discomfort each viewer could maybe be said to be equal.

The parade/protest of Untitled mirrors the set up of the still-in-theatres sci-fi film Annihilation. An alien realm on Earth prismatically intertwines the DNA of all forms of life inside it. Everything is fundamentally, uniformly, a bit off. In Abney’s increasingly and intentionally crude, cube-y forms, consensus is just out of reach. While Untitled embodies Abney’s continued trend toward reduced figuration and symbolism, the meticulously dissimilar anatomies harken back to the gonzo vein of Abney’s earlier repertoire. 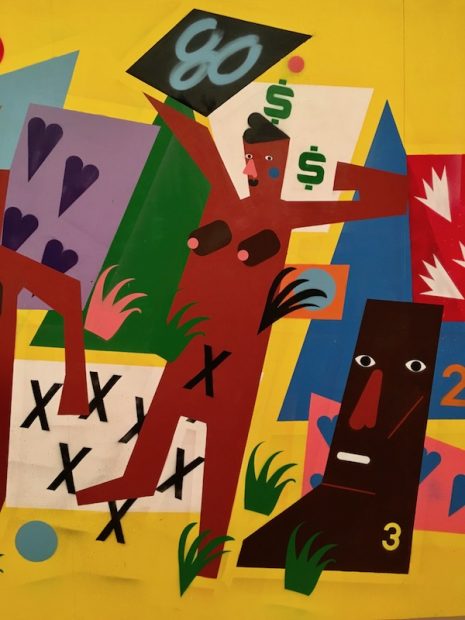 Attention for Abney’s honed and universal FOCUS in Fort Worth hopefully stamps a swift return ticket to Texas for the artist (having shown previously in Houston). Such a strong grasp on how to load up the frame with a crossfire of varying, even conflicting narratives that break free of the canvas and lodge themselves deep inside the gray matter of our brains sets up audiences for some weighty and vital lines of inquiry to follow throughout a visit to the Modern.

Throw in “some” Stuart Davis? Come on. I’m sorry, but that’s all I see…

Really well written, particularly the consideration of the space the paintings are presented in and the likenesses of the work to other artists. However, I’m concerned over the Realtors lack of representation in the piece. #realtorsareimportantalldayeverydayeverywhere