At Glasstire, we’re always paying attention to art books from Texas and beyond. We’re also, occasionally, picking up old books that we haven’t quite gotten around to yet. Here’s a short list of publications that stood out to our staff in 2021. 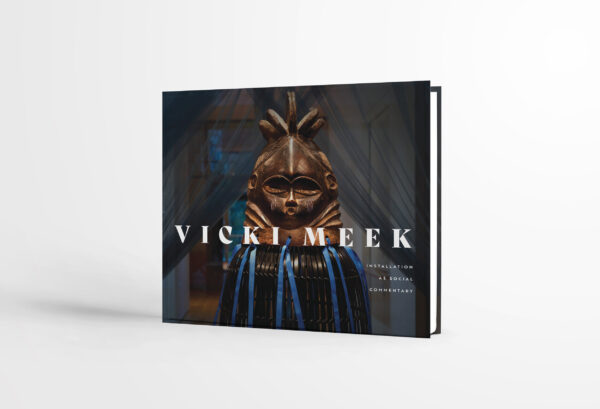 Each year, since 1983, the Art League Houston has named a Texas Artist of the Year. Along with the title comes a catalogue of the artist’s work. This year, Dallas-based artist Vicki Meek was awarded the honor. The accompanying catalogue provides a retrospective look at over thirty years of her work, including her 2021 installation at the Nasher Sculpture Center, Stony the Road We Trod: A Shrine to black America. 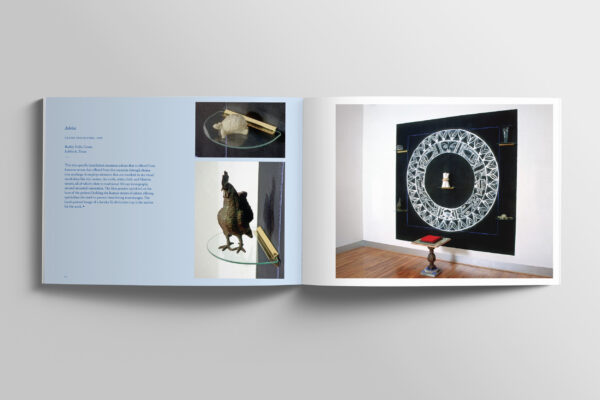 Meek’s work is deeply rooted in Black culture, referencing African, American, and African-American knowledge, beliefs, and experiences. It is powerful to spend time with the twenty installations presented in the pages of the book and see the connectivity and visual language established by an artist over more than three decades of work. Prefaced by an artist statement and an essay by Dr. Lauren Cross, the text provides a wealth of insight into the artist’s past, influences, and processes. From an installation in the bathroom of the Grackle Art Gallery (a small house gallery in Fort Worth), to an installation as part of the first cohort at Project Row Houses, to her installation in a group exhibition at the Museum of Fine Arts, Houston, Meek has long been a key player and important voice in the Texas art scene. 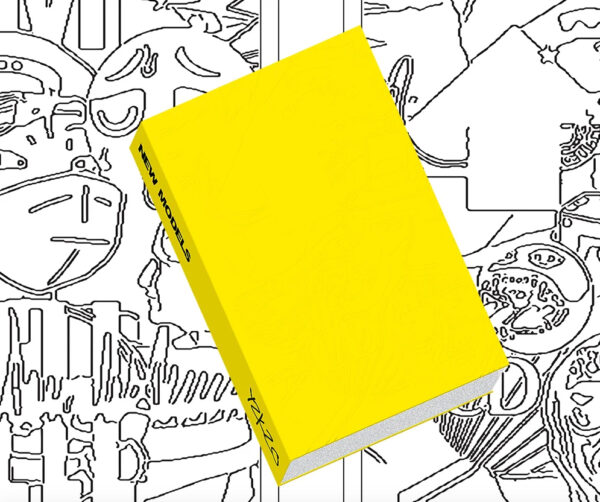 Founded in Berlin in 2018, New Models is an online space for information sharing and dialogue related to art, politics, pop culture, emergent technology, and online ecosystems. What started as a hand-crafted aggregation of news and information — an attempt to bypass algorithms — later launched a podcast, which gave rise to an online international Discord community. While operating online is an inherent aspect of this group, in response to the unprecedented year of 2020, dozens of New Models volunteers banded together to produce a physical book which was published this year.

The title references the shorthand term for “the year 2000,” which was used throughout 1999 to refer to the potential havoc that could’ve been caused by computer errors related to the formatting of calendar dates. Of course, 01/01/2000 came with no major issues, but 2020 would turn out to be a year of crises, ranging from a global pandemic to nationwide protests in response to police brutality against Black people.

Composed of articles, photographs, screenshots, and Discord conversations, New Models Codex Y2K20 aims to document the year in a tangible form. The 368-page book lists over 20 contributors, including two based in Texas. Sarah Wambold, Austin-based mortician by trade, writes and speaks about death and dying. For the publication, she contributed an article about the infinite nature of the online world and how even death can be evaded with the persistence of our digital selves. Jean-Luc V, a Fort Worth-based writer (who, full disclosure, is also my partner), contributed a compilation of handwritten notes entitled Ways of Being, which investigates time and space as portrayed in Paul Bush’s movie, Babeldom. The publication also has a third Texas connection: it was funded in part by Houston-based collector Seth Stolbun. While the first edition of the book is sold out and the second edition is only available in select stores, curious readers can gain access to Codex Glossary, a online record of terms used and defined by New Models through written text and audio clips. 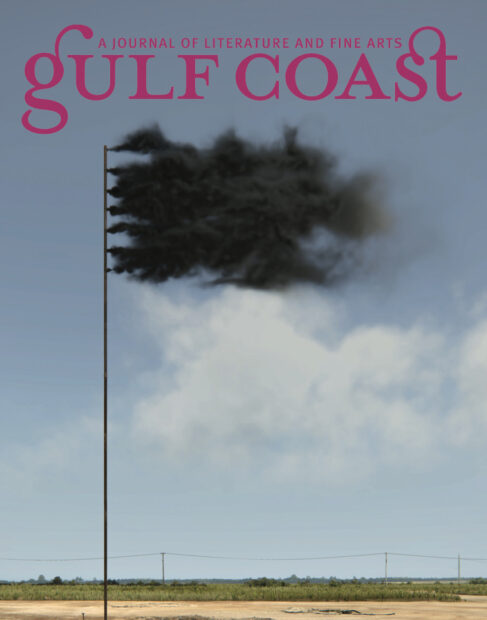 Gulf Coast Journal’s survey of contemporary literature has many focuses, including poetry, fiction, non-fiction, translated work, reviews, art writing, and full color photographs of fine art. The journal awards annual prizes in the aforementioned categories of poetry, fiction and nonfiction, with the awardees being printed in this volume. Leila Renee’s short story is about a teenage boy in South Africa who gets to meet his father for the first time, and engages the impossible distance between generations of men. Perhaps my favorite component of Gulf Coast is the translated pieces, from poetry to fiction, which offer English-speaking readers in Texas the ability to engage with literature at a global scale. For instance, an excerpt from Olga Breininger’s There Was No Adderall in the Soviet Union, which won four prizes in Russia for its contribution to literary prose, has been translated to English by Hilah Kohen. In the story, the narrator recounts balancing between presenting at a conference on slavic studies and the strange experiments being performed on her consciousness. Gulf Coast Journal is sure to appease anyone with an interest in contemporary arts and literature. 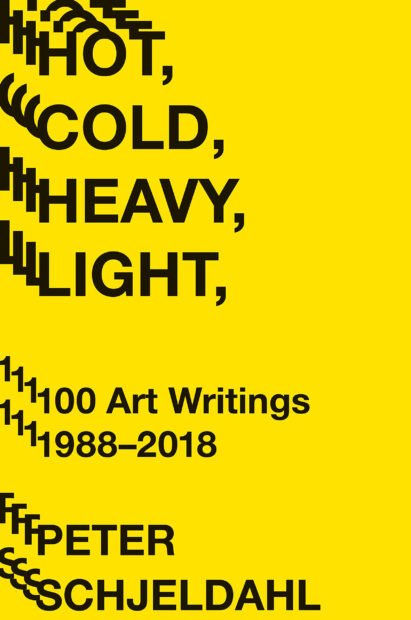 There is not much that needs to be said for an art viewer who has seen it all, because they can say it themselves. Peter Schjeldahl’s anthology, Hot, Cold, Heavy Light: 100 Art Writings, is a guidebook through names you have probably heard, but may not know intimately. Jarrett Earnest prefaces the book, noting Schjeldahl’s, “always nuanced human feeling” when describing the art and artists of our world. The essays are titled simply, usually with the name of the artist they are chronicling, but sometimes with an event, as in “A theft in Norway,” which mulls over the 1994 theft of Edvard Munch’s The Scream.

Schjeldahl’s style is fluid, concise, and, in unexpected ways, remarkably fun to read. The essays in Hot, Cold, Heavy, Light will inform the reader of what it was like to be there — in the USSR, or the National Gallery of Art in Washington D.C., or on the day of Keith Haring’s death. Schjeldahl’s bouncy wit and generous charm makes it feel like anything he’s writing about could have happened yesterday. 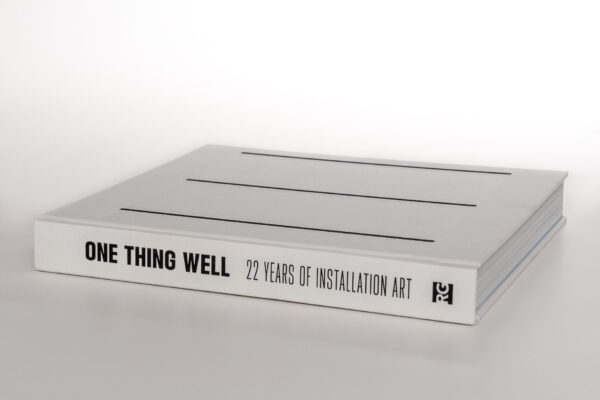 I enjoy books that feel good — publications that are fabric-covered, hefty tomes — the kind of book you have to put on a table to read (or skim) because it’s too heavy to hold up while lounging on a couch. One Thing Well: 22 Years of Installation Art, which chronicles the life of Rice Gallery, the now-defunct, fishbowl, site-specific installation space that lived at the front of Rice University’s campus, is that book. The project is a labor of love by Kim Davenport, the space’s Director and Chief Curator, Joshua Fischer, who served as Rice Gallery’s Curator, and Rainey Knudson, the book’s Editor. (Here I’ll disclose, as you may know, that Knudson is also the Founder and former Publisher of Glasstire, and is also currently working on a project for Glasstire.) 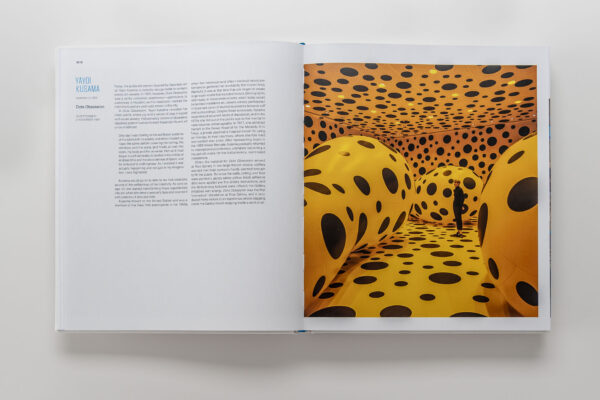 One Thing Well is exactly what it should be: 336 pages of lush, full-color (and some full-page) photographs of the space and its installations, buttressed by short essays and descriptions of the shows, written by Davenport and other guest contributors, including Dave Hickey, Sandra Zalman, Kelly Klaasmeyer, and others. What’s remarkable here is not the ambition of any of the space’s single installations (although there were many hall of fame exhibitions at Rice Gallery), but the sheer quality and quantity (72!) of the shows Davenport and Fischer were able to organize. They included under-recognized artists who later blew up into the mainstream (Kusama in 1997; Nicole Eisenman in 1998), well-known artists who could really capitalize on the free reign they had over the space (El Anatsui and Sarah Oppenheimer, both in 2010), and everyone in between. 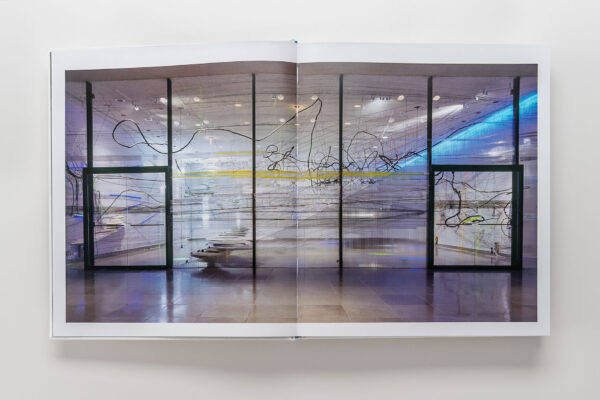 Because everything at Rice Gallery was site-specific — “Rice Gallery was the only university gallery in the nation devoted to commissioning site-specific and installation art,” reads the book’s first page — you really had to be there to see it. This publication, however, is the next best thing: it’s an archive of the blood, sweat, and, I can only image, tears that went into making Rice Gallery one of the best spaces in Houston. 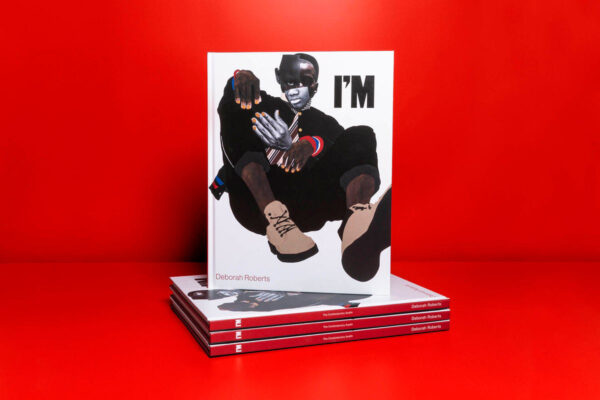 Earlier this year, Glasstire extensively covered Deborah Roberts: I’m, the artist’s solo exhibition organized by and originally on view at The Contemporary Austin. The show is now onto its next stop, the Museum of Contemporary Art Denver, and will soon travel to two other venues — one in California, and one in Florida. You can read our review of the show here, see photos from its Austin iteration here, and listen to and watch our interview with Roberts here.

Because we’ve already written extensively about Roberts’ show, I’m focusing here on the exhibition’s catalog. First, it is much like Roberts’ most recent work: larger than life (the book is oversized), subtle (it’s a rather straightforward exhibition catalog), and in demand (the first printing, an edition of 1,000, sold out right away. A second printing is in the works.) The publication, in a very matter-of-fact way, works well both as a companion piece to the show, and as an overview of what Roberts has been up to in recent years.

Physically, the book is the size of a small artwork (14 inches tall by 11 inches wide), and is printed on textured, matte paper. This gives the images in the publication a feeling of substance: Roberts’ pieces are not illustrations on a page — they’re in the room with you.

Content-wise, in addition to the full-color plates of Roberts’ work, the book includes installation shots of her show at The Contemporary, as well as essays by Heather Pesanti, Eddie Chambers, and a foreword by Darren Walker. Perhaps most importantly, the book features an interview between Roberts and Zoé Whitley, director of Chisenhale Gallery in London. I always like reading essays by and interviews with artists, as the pieces tend to really capture an artist in their environment. And as you might expect, if you’ve ever had the pleasure of talking to her, this interview with Roberts has a hearty mix of candor and humor.