Kermit Oliver is a Texas legend, a self-described “reclusive” artist who kept his night shift job sorting mail at the Waco post office until this August. He is seventy. His work is in the collections of the Metropolitan Museum of Art, MOMA and the MFAH. He is the only American artist ever commissioned to design scarves for Hermes. Upon seeing one or two of Kermit Oliver’s works, you may be struck by the realist painter’s skill and imagery, but you really need a collection of his works to convey his ideas. His work has a kind of wistful poetry that becomes more and more evident upon viewing multiple works. 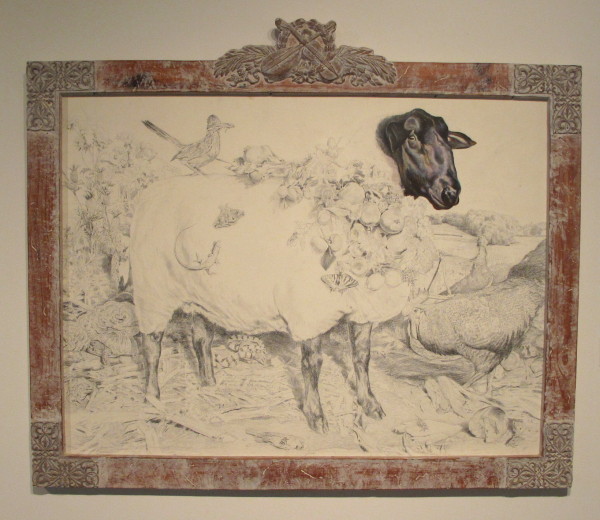 Oliver handles acrylic paint with a lightness, dexterity and sensitivity not often seen in the medium. The Art League’s Tracing Our Pilgrimage presents a lovely selection of 17 paintings from 1970-2013. It’s a small show but it is very effective. It is dominated by images of animals and nature; Oliver’s father and grandfather were African American working cowboys. In a 1997 work, Garlanded Sheep, the animal wears a lush cluster of fruit around his neck, a bounty fit for a Dutch still life painter. The sheep’s head is painted but his body is only a sketch, as if his memory is already fading away after the slaughter. 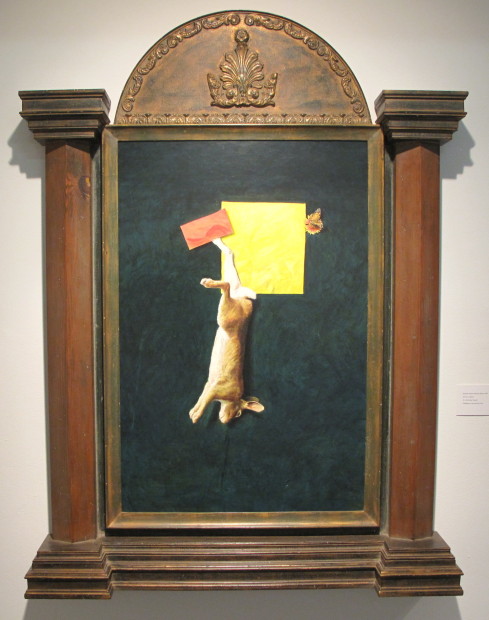 Buckeye Atop a Mexican Wheel (1997) blends the pathos of death with other artistic references. A rabbit hangs by a foot held in place by a red rectangle of paper with a yellow square of paper behind it. The paper looks all crinkly so we know it isn’t just supposed to be painted shapes. It looks like a Kazmir Malevich painting has murdered the bunny in Albrecht Durer’s 1502 watercolor of a young hare. Is Oliver making a sly comment about art snuffing other art? 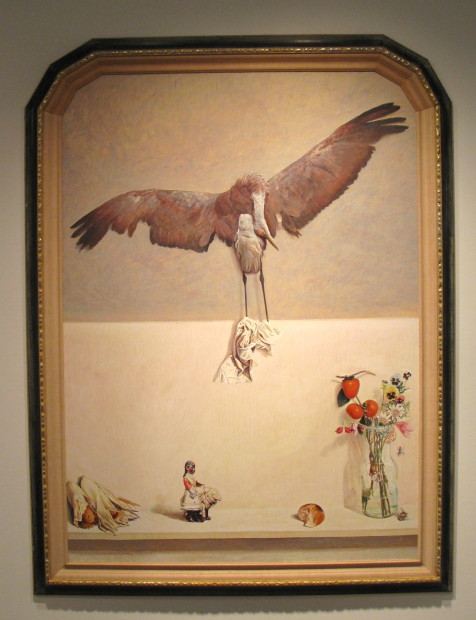 Oliver’s work is infused with a feeling of fall, warm golden light and a sense of looming barrenness. In Sandhill Crane (1983), the crane stands with its neck hanging limply forward and its wings spread wide as if crucified. Dried corn, a crust of bread and a vase of fragile, skimpy flowers sit below like offerings. In the midst of them is a 19th century figurine of a young black girl leading a sheep. The work is laden with the inescapability of time and nature. 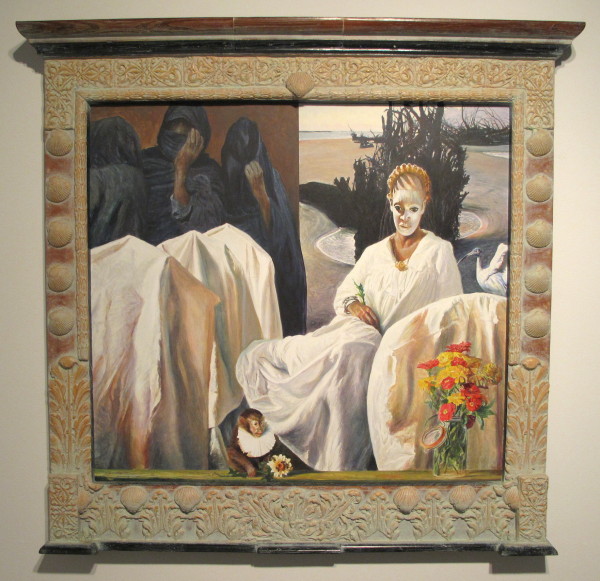 Looking at the show as late afternoon October light angles into the gallery, you feel like you have entered church, not a mega church or even any sort of Christian church. It’s like some sort of ancient spiritual place. It’s in the warm light in his paintings as much as it is in the biblical and mythological imagery Oliver uses. His ornate hand-made frames turn the paintings into icons. A portrait of Uriah’s mother shows her mourning the murder of her son, but is also a portrait of a black woman morning the senseless death of many sons. A painting titled Dido and Aeneas (1997) shows the doomed queen and her mourners, her face melded with a 16th-century mask of the Queen Mother of Benin. Oliver taps into loss and grief that spans time and cultures. His beauty is filled with the melancholy that comes with knowing it won’t last. But somehow Oliver imparts in his works a sense of steadiness, a stoic acceptance to the cycle of birth and death, love and loss. And, in that, is a kind of hope.