Stolen Artwork is Found: Of the Serpent’s Piece for San Antonio’s Luminaria Festival 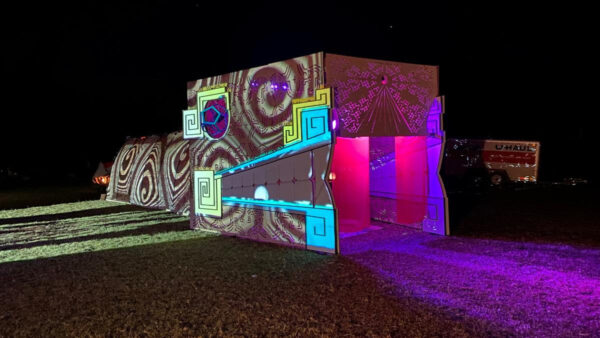 Of the Serpent’s piece for Luminaria. Photo: Luminaria

Luminaria, a contemporary arts festival in San Antonio, said late last night that an artwork that had been stolen from one of its participating artist groups has now been found. This news comes on the heels of the festival’s announcement at 12:30 PM on Monday that the piece was missing. The work, which was created by Of the Serpent, a collaborative based out of San Antonio’s Lone Star Arts District, is a modular, immersive, large-scale outdoor sculpture featuring lights and projections.

According to a recent post on the collective’s Instagram page, the group called the work a “multidimensional walk-through installation.” In total, when assembled, the work is 50 feet long.

In a video released on the festival’s Instagram page around 8 PM Monday, members from Of the Serpent discussed details of the theft, alleging that someone broke into Of the Serpent member Timofay Trofimenkov’s studio, stole his keys, and then drove off in his truck which was hauling the group’s trailer, which contained the disassembled sculpture.

The group noted in the Instagram video that they ultimately found the trailer containing their sculpture, and that the piece is “mostly intact,” although they say that some of their tools and other effects are still missing. Additionally, Trofimenkov’s truck, a black Nissan Frontier, is still missing.

Ultimately, Of the Serpent concluded their video on Luminaria’s Instagram on a positive note, saying “the show will go on!”