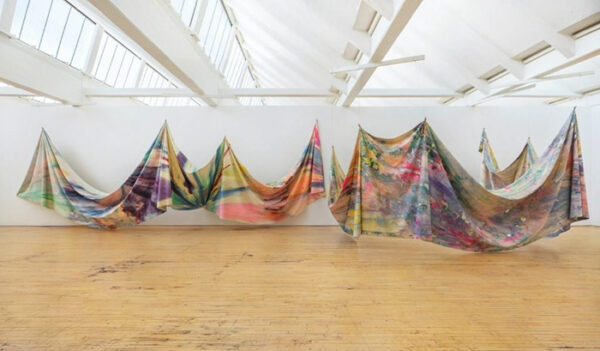 Last December the Modern Art Museum of Fort Worth’s Director Marla Price announced the museum’s acquisition of Wangechi Mutu’s The Seated III, 2019. It was followed by an announcement from William Campbell Contemporary that Cloud Palettes and Big Head, two paintings by artist Richard Thompson, have also been added to the Modern’s collection. And in early February, the Smithsonian Institute acquired the archive of Austin gallery Women & Their Work. In other words, the pandemic has not slowed museum and institutional acquisitions.

It is in this context that the Museum of Fine Arts, Houston has announced that, along with the Dia Art Foundation, it has made a co-acquisition of Double Merge (1968), an early work by artist Sam Gilliam. (The Museum previously recently exhibited a later Gilliam work, Carousel Change from 1970, as part of the traveling Soul of A Nation group exhibition last summer.) Double Merge is a drape painting, composed of two single drape paintings, both titled Carousel II (1968).

Before going on view at Dia in 2019, the paintings had never before been shown together in public. Via MFAH: “Partnering on this acquisition will allow audiences in both New York and Texas to encounter this important work over extended periods of time at each institution.”

“Sam Gilliam’s early experimentations with form and color have had a transformative impact on what we imagine painting and sculpture to be,” says Jessica Morgan, Dia’s Director. “Having Gilliam’s work on view at Dia Beacon over the last two years, alongside focused displays of work by many of his artistic peers, has expanded our audience’s understanding of this period of art history.

She continues: “Bringing Double Merge, the centerpiece of this display, into Dia’s permanent collection represents just the beginning of a rich and in-depth relationship with the artist, which will span exhibitions, public programs, and further scholarship on both Gilliam and this period overall. I am also delighted that this co-acquisition with the MFAH will bring this unique and important work to a wider audience.” 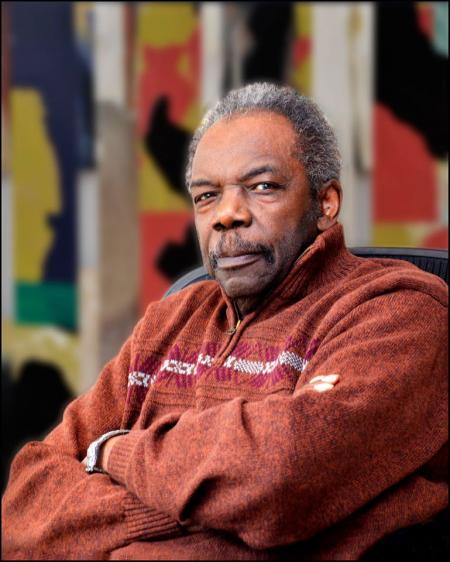 Gilliam’s work is not new to Texas. Beyond the Soul of a Nation exhibition, the artist was part of the 1971 Houston exhibition, the De Luxe Show, held at the Fifth Ward movie theater of the same name. He also visited Houston in 2015 to talk about his work in the  exhibition Affecting Presence and the Pursuit of Delicious Experiences, at the Menil. Among other collections, Gilliam’s acrylic on canvas Leaf from 1970 was acquired in 2018 by the Dallas Museum of Art by its then-new Director, Dr. Agustín Arteaga.

States Gary Tinterow, MFAH’s Director: “Over the last fifty years, Gilliam has established himself at the forefront of American abstraction. His groundbreaking investigations blur the boundaries between artistic disciplines, emphasizing the process, materiality, and dimensionality of painting and its display. We are delighted to partner with Dia Art Foundation in bringing this landmark acquisition into both of our collections. While we are fortunate to already own another work from Gilliam’s Drape series, the monumental scale and complementary nature of Double Merge’s two segments allows our museum to represent the artist at the height of his first signature achievement.”

For more on Double Merge (1968) and the Museum of Fine Arts Houston, please go here.

Sam Gilliam was born in Tupelo, Mississippi, in 1933. He grew up in Louisville, Kentucky, where he attended the University of Louisville and gained a BA in 1955 and an MFA in 1961. After moving in 1962 to Washington, DC, he became involved with the Washington Color School. In the 1960s he began exhibiting abstract paintings without a stretcher, suspended from the gallery wall or ceiling. Gilliam has been the subject of many exhibitions at venues including the Kunstmuseum Basel in Switzerland (2018); Corcoran Gallery of Art in Washington, DC (2005); J. B. Speed Memorial Museum in Louisville (1996); and Studio Museum in Harlem (1982) and Museum of Modern Art, both in New York (1971). He has been the recipient of numerous grants and awards, including the United States State Department Medal of Arts (2015), National Endowment for the Arts Individual Grant (1989 and 1967), and John Simon Guggenheim Memorial Foundation Fellowship (1971). Gilliam lives in Washington, DC.

Dear Glasstire friends, I bring to your attention that Sam Gilliam’s major retrospective (organized by Jonathan Binstock) was mounted at CAMH in 2007. It was a marvelous marvelous show & well received in Houston I wish you had mentioned it in your article about the fabulous acquisition of Sam’s early draped works by the MFAH and Dia.