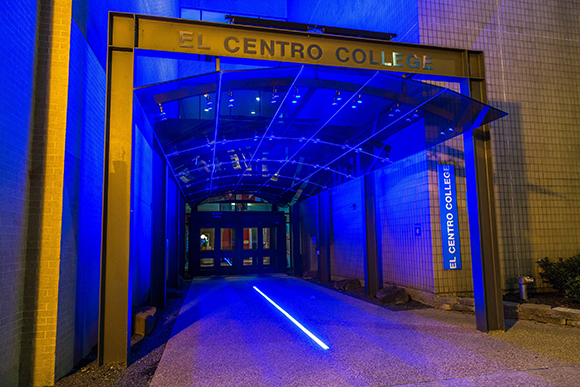 Through his work, artist Ryder Richards often examines what he describes as “the pressures and resultant response of the individual within a dominant (often violent) culture.” This scrutiny has led to Richards’ Resilience and Remembrance, his new public artwork for El Centro College in downtown Dallas, which was unveiled last Wednesday.

The installation is comprised of eight lights atop the canopied entrance to El Centro, and a strip of blue light down the middle of the walkway. It was here that on July 7, 2016, five police officers were killed in the line of duty. The installation honors both those officers and their wounded colleagues.

After working on the piece for the past two years, Richard writes of Resilience: “Besides the obvious light memorial aspect, I wanted the piece to function as a way-finding path to a safe space, so that it could serve a practical function in addition to its symbolic role.”

El Centro’s statement reads, in part: “The tragic events of July 7, 2016 changed our community forever. To commemorate the memory of the fallen officers, the resilience of Downtown Dallas, and the El Centro College family, these lights will remain bright. The blue line will continue to offer a path to sanctuary for those in need and remain a testament to the ideals of dedication, courage, empathy, sympathy, and honor.”

Read more about and by Richards here, here, and here. For the past few years the artist has split his time between Roswell, NM, Lubbock, TX, Wassaic, NY, and most recently, Fukuoka, Japan. Resilience and Remembrance can be viewed at the north entrance of El Centro, on Elm Street in Dallas.

I’ve long loved Ryder’s work and look forward to experiencing what looks like a beautiful and moving installation.

That said, I wonder whether it in any way acknowledges the tragedy of the shooter, Micah Johnson, a 25-year-old African American Afghanistan war vet who was motivated by the lack of “safe space” for black men – i.e., “by recent incidents in which black men were killed by cops” – and who was droned by the DPD after just two hours of negotiation? (See https://www.nbcnews.com/storyline/dallas-police-ambush/dallas-shooter-micah-xavier-johnson-was-army-veteran-n606101 ; https://www.foxnews.com/us/dallas-suspect-taunted-police-during-2-hours-of-negotiation .)

[Because to simply starve Johnson out might have prolonged a dangerous situation – or at least have disrupted convenient parking for businesses – for too long.]

If the installation does not include such acknowledgement, I wonder whether the funder objected or would have objected to such a proposal?

What would have happened if the artist had snuck such an acknowledgement into the work without informing the funder? I expect the artist’s prospects for similar commissions in the future might be impaired….

Regardless, opportunities still exist to further explore the tragedy of the shooter, as well as the challenges of law enforcement. A program or conversation, or series of them, located within the installation could reach and potentially include a lot of people.

Heartfelt thanks and congratulations to Ryder for all he’s created. Looking forward to any comments setting me straight, and to whatever else we all continue to create.

Ryder, you’ve created a moving tribute to first responders who paid the ultimate sacrifice in their work for their community. As the wife of a first responder and an art educator, I appreciate your use of built environment to create a shared space of remembrance, courage, refuge, and resilience. And it is beautiful.