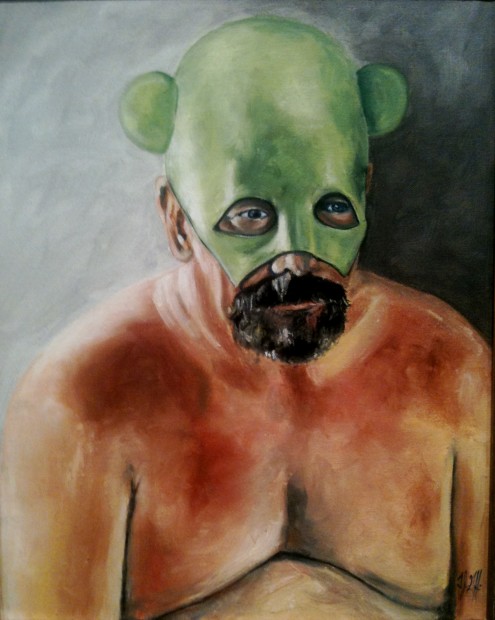 The membership show. It has one hundred eighty-something pieces of artwork and no curator.

Any member can bring one work of their choosing that expresses the year’s central theme. This year’s theme at the McKinney Avenue Contemporary is “Meltdown!” The work cannot be larger than 2’x 2’ because a lot of members require a lot of gallery space.

Most of the pieces are for sale, and many are by working artists with gallery representation. Ro2 Art in Dallas has a bunch here.

With a crazy amount of art to look at, some themes-within-the-theme are bound to emerge. Religious meltdowns were a common subject, as with Alisa Levy’s beautiful photograph Losing My Religion, depicting a church interior unnaturally interrupted by an improbable glimpse of heavenly, fluffy-cloud sky. 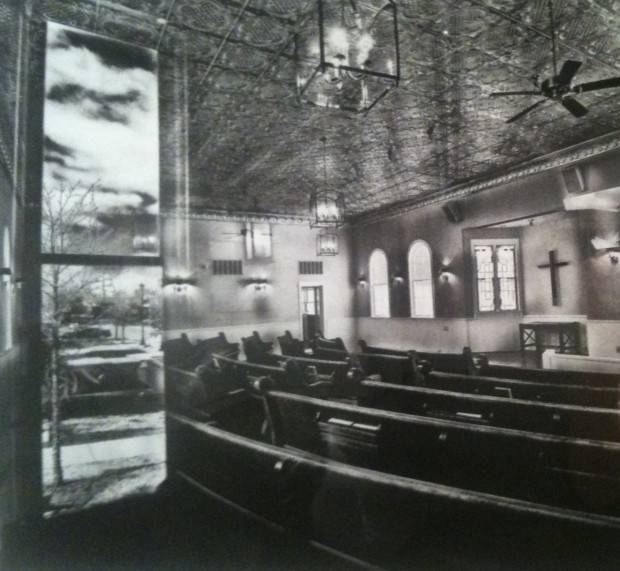 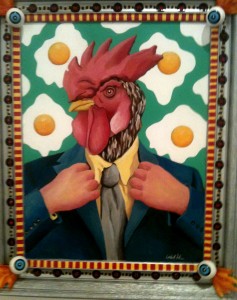 Kitsch appeared here and there with wonderful comic relief to all the religious iconography, which made me feel like I’d accidentally wandered into an uptown satellite of SMU’s pious and gloomy Meadows Museum. Chickens with man hands have historically freaked me out, and Linda Ford’s Legacy is no exception. 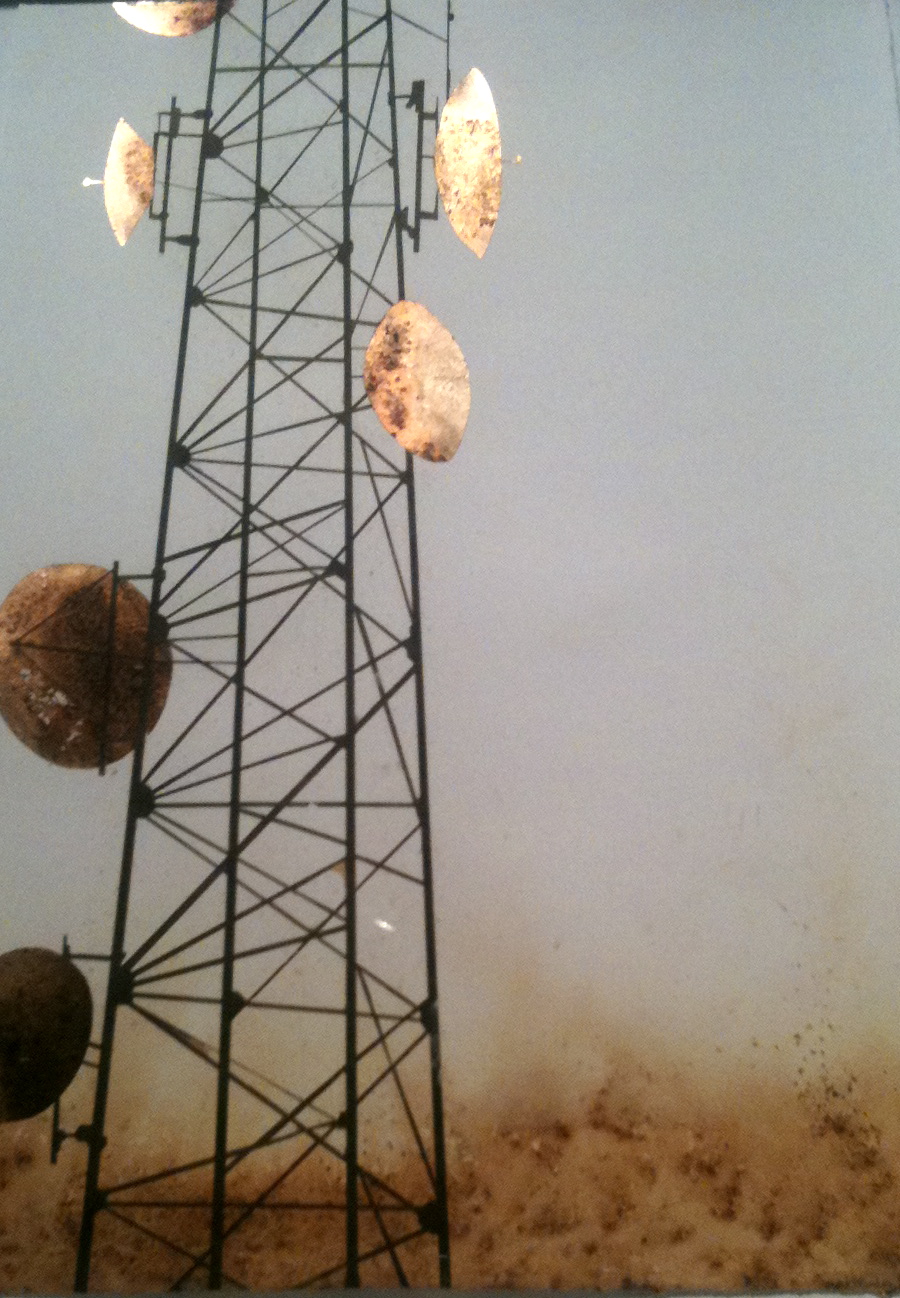 Heat is the obvious thematic interpretation, and the professionals tackled it with insightful originality. Ryder Richards selected the intense Portales: Isolation as his show piece, a goldleaf, gunpowder, and graphite work on paper illustrating a tower of technology that could easily be mistaken for an oil well, with shimmering gold pieces climbing up a structure sitting on a foundation that looks all burnt up. Another favorite was David A. Dreyer’s In To Down, an oil on laminated birch plywood abstraction of yellow and green with a shape suggesting a furnace, or an air-conditioning wall unit. 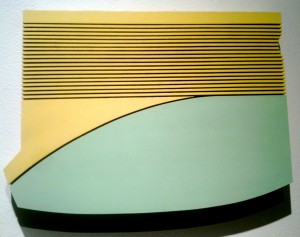 David A. Dreyer, "In To Down," Courtesy of Valley House Gallery

And no membership show can sleep well at night without its due of social commentary. Ernest Sparacin’s ALL we ALL have is time greets visitors in the lobby as a funky, Chernobyl-inspired orientation to all that will follow, the word MELTDOWN topping a nested bed of watch faces inlaid on a magazine cover. 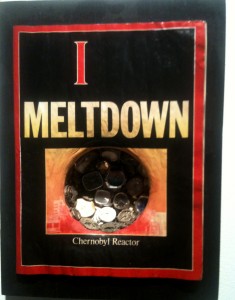 Ernest Sparacin, "ALL we ALL have is time." detail

If there is a giveaway that a substantial number of pieces are the products of the enthusiast rather than the artist proper, it is the child-like work, the stuff the gives refrigerator magnets a purpose. Sal Barron’s Meltdown at the Elementary Levelis actually a pretty funny social commentary, but as I moved on in the show I found works of nothing more the squiqqly lines in bright colors. That is the price of inclusivity, and once a year, it’s kind of nice. 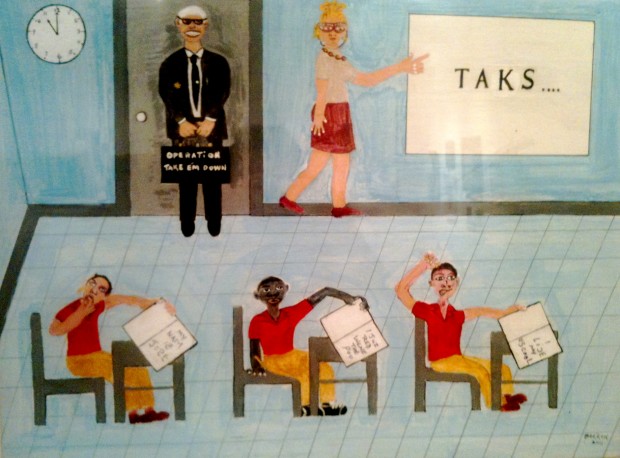 “Meltdown” was organized by MAC staffers LauraLee Brott, Lisa Hees, and Jessica Iannuzzi, and installed by David McCullough. It runs through September 3rd. 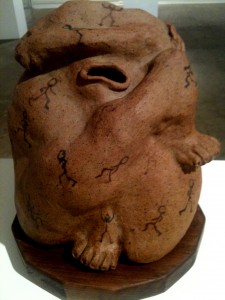 Betsy Lewis is a writer who lives in Dallas and lets the ice cream melt a little before eating the whole pint.

The Meadows Gets Medieval in March