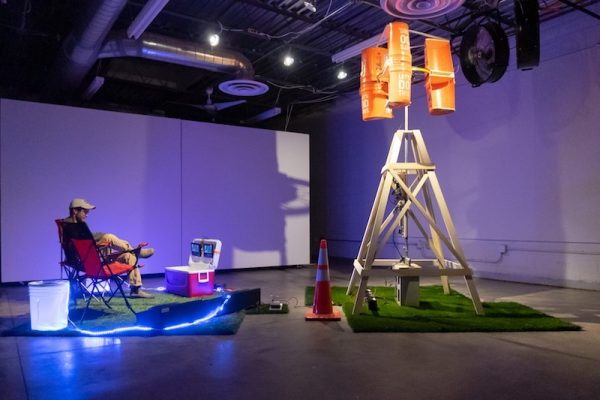 Once, someone who grew up in Boston told my brother that people who grew up in rural areas were stunted. I guess I know what she meant, but there’s something about growing up in the sticks that makes you extremely self-sufficient. If some sort of apocalyptic collapse happens, guess which folks know how to kill and dress an animal, store seeds and grow food, and have an arsenal of booze (what else)? My point is, there’s a culture of survival in rural places that permeates everyday life.

This do-it-yourself-ism, gumption, grit — whatever you want to call it — is the impetus for Ryder Richards’ installation, titled 2018 Empowerment, at the Charles Adams Studio Project (CASP) that debuted on a FFAT in Lubbock in December, as part of CASP resident J. Eric Simpson’s curated exhibition series. It consists of, primarily, a set of camper chairs, speakers, the kind of LED light strips found in airplanes and glampers’ RVs, an open ice chest complete with ice and beer (help yourself!) that is also propping up a double-screen viewing of Sharknado 3. All this is set upon large AstroTurf mats and is overseen by a makeshift wind turbine composed of Home Depot buckets, an array of batteries, and a plugged-in set of fans that keep the turbine propelled. 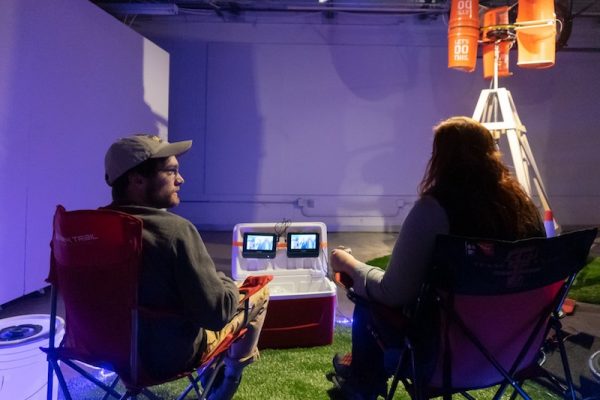 Where to begin unpacking this array? The work pokes fun at industry (industriousness?), back-porch sitting, garbage movies, and the level at which mankind interacts with the great outdoors.

At the same time, Richards’ work maintains a reverence for cash-strapped ingenuity, and it makes his critiques land softly, which is not a bad thing. Richards, who’s based in DFW but has deep Panhandle ties, avoids low-hanging fruit, and he ignores any tidy trajectory in his works’ evolution. 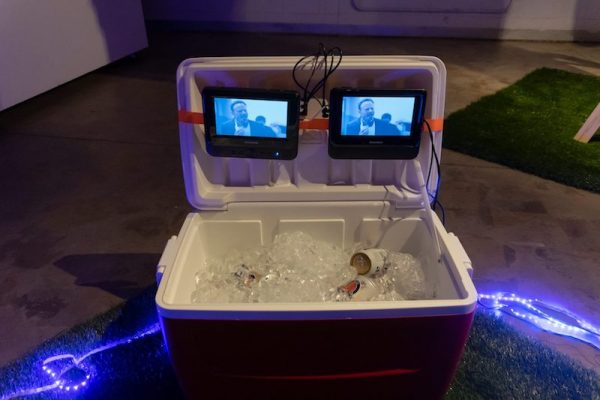 These elements of a cookout or campsite, plus the Sharknado-blaring huge speakers, nearly (but, cleverly, not quite) drown out what Richards is honing in on: We humans have created a vast need for energy. We also use a helluva lot more of it than we need. Next: Is a critique of a renewable resource, like wind energy, valid? Empirically, the answer is always “yes.” But our current climate crisis is one where it seems bold — even brash — to point out that wind turbines enjoy a continuous intake of energy, but only output intermittently, and have fossil-fuel run generators that pick up the slack. Still, these produce less pollution (and I’ll take “aesthetic pollution” over the actual kind any day, which is good, because the turbines cover the landscape up here) than the burning of fossil fuels. It took a hefty amount of research for me to suss out any accurate information on these things, and on the internet that is a daunting task. (See: Political Problems, Chapter 224).

There is a difference between research (empirical or otherwise) and experience. Uniquely, the art world allows for artists, like Richards, to research from a removed, academic and intellectual position, while also delving into the nuances of lived experience. Richards states: “…in that way, my research is a manifestation of self. There is another way to consider it, where the viewer is the researcher to whom I am providing an experience… on many levels, from populist culture into discussions about capitalist realism and the pitfalls of neoliberalism.” 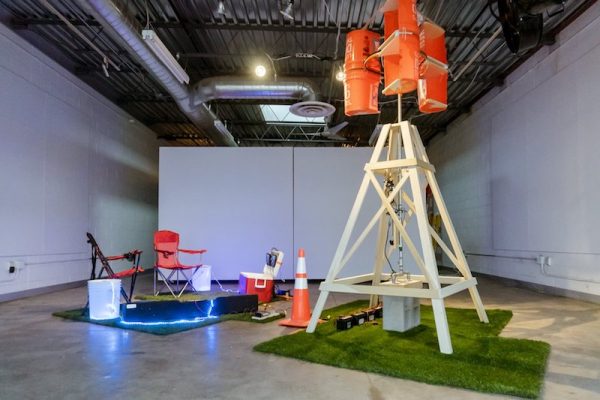 Boom. Richards’ open-mindedness, before the last presidential election, elevated those who were seen as “less-than” due to blue-collar labor (this cultural/classist divide is still problematic), but after the election, his commentary has shifted to parse the line between “right” and “left,” as political polarities demand in almost any discussion these days. Strange to think that this kind of thoughtfulness can flag you as some sort of wing-nut sympathizer — does he think like me? It’s a breath of fresh air to be confused, and not receive an immediate answer from the artwork. It’s equally refreshing to laugh out loud at an object or installation, and simply enjoy the artist’s creative impulse to make something semi-functional.

In that way, Richards’ installation is almost hopeful.

Images courtesy of the artist.

Hannah,
I enjoyed reading your insights on Ryder’s work. I posted on his IG telling him that it looked like a weird tailgate party and asked him who exactly was empowered? This is his response, “To struggle and build a machine that can function and entertain definitely Feels empowering. What if this base empowerment is merely a means to generate opportunities for online DIY interaction, cheasy movie club, or tailgating? What if the actual power harnessed and converted is only an excuse for more consumption and banal social interaction? Is it less valuable or more real?”

Ryder’s work pokes fun at certain aspects of masculine culture, the Home Depot oil rig certainly speaks to Texas masculine culture, but there’s another level of questioning here. White males are feeling threatened right now and the feeling of empowerment is tenuous. This work (like most of his work) explores power and power dynamics in labor, institutions and gendered stereotypes/cultural trends. With a healthy dose of subversive humor.

Colette, thank you for your response! (I tried to leave a comment and may double up, I’m in the middle of nowhere and the internet service stinks.)

Those are really good questions to ask. The “oil rig” is actually a functioning wind turbine, but only functions because it is powered by electric fans and batteries that you would find in smal machines, like a scooter.)

Masculinity, “acceptable modes” of male friendship, the rural male, etc. are all important lenses through which to view Ryder’s work, I would agree.

He has about a million things going on— very clever and tongue-in-cheek, even self-deprecating.