by Christina Rees May 16, 2017
FacebookTwitterEmail 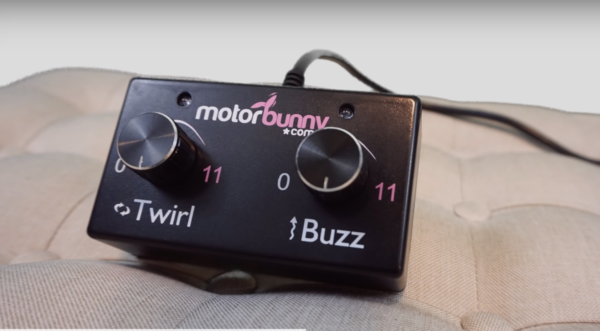 “My kids are home,” she answered.

Google led me to the ultra-charming comic-style sex-toy review site, Oh Joy Sex Toy, which had given the Motorbunny a thumbs down for being too violent. (They didn’t use the word violent. They wrote that it’s “frightening” and, “like getting punched in the cunt at super speed.”) 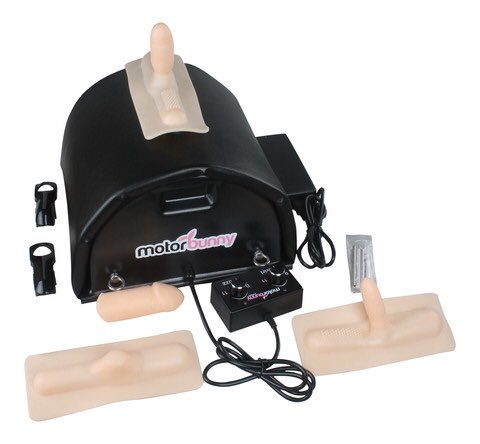 But let’s overlook that part for a minute, because Motorbunny authorized a really great online ad campaign featuring artists—most of them Texas-based—using the machine to make art, carte blanche. I suppose if employing artists to give your brand some street cred can work for Absolut or Red Bull or BMW, then why not a large, saddle-style, double-motored sex robot? It’s also telling that the company has the good humor to make its machine dials go to eleven. Ryder Richards (not a porn name), the very smart Dallas-based artist who took on an organizing role in this project, approached his artists friends who were more likely to say ‘yes’ (or hell yes!) to such a proposal, and in the end there are twelve completed Motorbunny art projects, all viewable online. You’ve heard of these artists: Richards himself, Sally Glass, Jesse Morgan Barnett, Emily Peacock, etc, or… the kind of artists the sex-advice guru Dan Savage might term GGG (‘good, giving, and game’).

You can almost break the twelve works into categories about how much transformation the Motorbunny underwent under the hand of each artist or collaborative duo, ranging from ‘completely intact’ to ‘completely removed.’ But let’s touch on the almost inherent corniness of much kinetic art, which can border on wind-chime or executive-desk-toy territory. I’m happy to report that all of these artists seem to understand this, as well as have an excellent sense of humor about how inherently abject and banal the sex industry, as a whole (ba-dum-ching) can seem at times, because the works they made either embrace this abjectness or banality, or in high irony style work to transcend it. Finding some poetry in a Motorbunny is the kind of problem-solving puzzle I’d like to think all good artists would tackle with real intent. 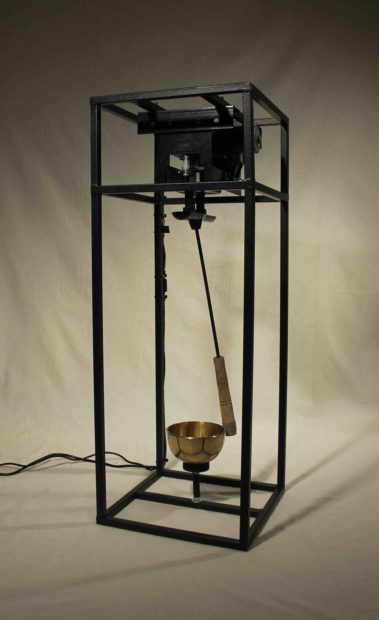 Let’s hop on. The two most radically modified projects of the bunch are by Dallas-based Michael Mazurek—who has removed all vestiges of the machine itself and left us only with enigmatic and schematic drawings—and the Oakland-based Ven Voisey, who made a Device for Possible Transcendence, a kind of Tibetan meditation instrument whose phallus-shaped wand circles the rim of a golden bowl and makes it hum. This is very funny, and it’s almost absurdly well-made and sophisticated. You have to know the thing started out as a Motorbunny for it to land, sure, but there’s no doubt of that given its context. 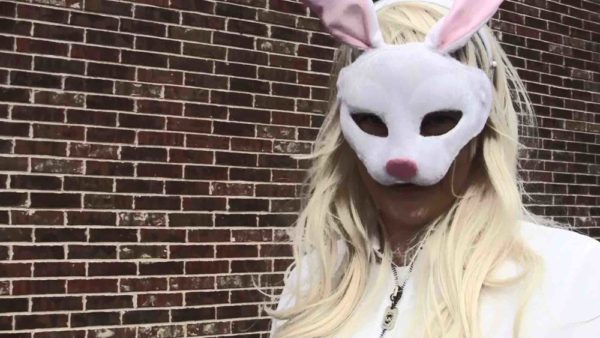 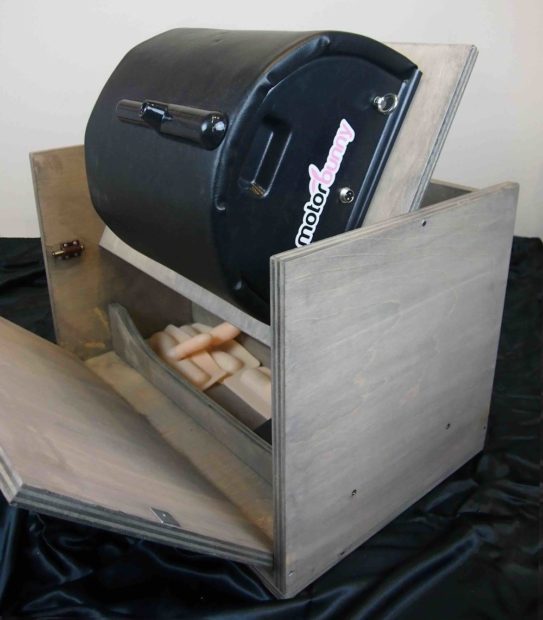 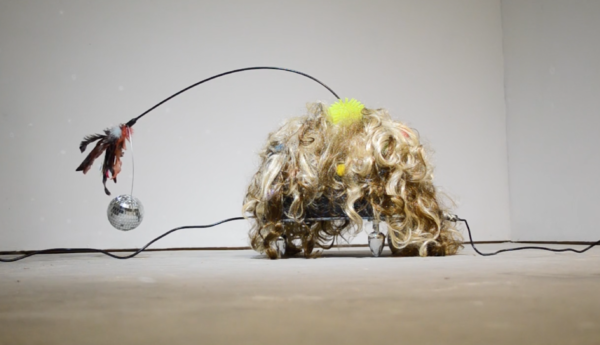 Ryder Richards and his collaborator Sue Anne Rische have gone straight to the gross, uncomfortable hangover of wretched excess and made a thing out of the Bunny called Banger, which looks like a sex-addict’s insane disco cat toy after a too-long Mardi Gras celebration. The object itself is the work, but in this case so is its eerie, somber documentation. It’s like John Carpenter went to bed with Hedwig, and they gave birth to a hairy little monster that has a clumsy yet still-threatening ability to give you an queasy orgasm, if you get too close. 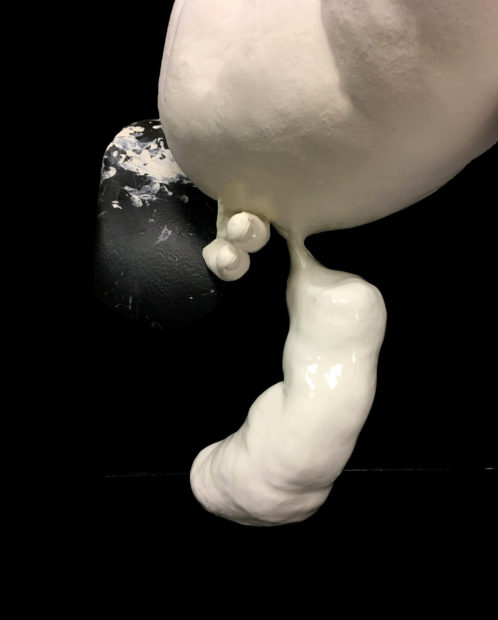 I was really curious about Jesse Morgan Barnett’s contribution, as I know him to be a particularly deliberate and pensive artist. Macrodactyly is his entirely sculptural reinterpretation of the Bunny’s many phallic and lumpy attachments: here white clay and plastic ooze from the saddle, frozen in time and looking like part Schmoo, part intestinal tract, and part intact fingers. It looks like it’s emerged in a slow volcanic flow. It certainly makes one question the narrow conventions of sybian-style accoutrement.

A few of the collaborations are by actual couples. Dallas’ Danielle Georgiou and Justin Locklear, in Twirl-A-Girl, attached a hapless Barbie to the top phallus motor and they dance her to death (or is it to bliss?) in their video. Houston’s Emily Peacock and Patrick Renner have thinly disguised their Motorbunny under an orange bumpy skin, a frantically waving American flag, and a white picket fence. Some good hypocrisy trolling there. 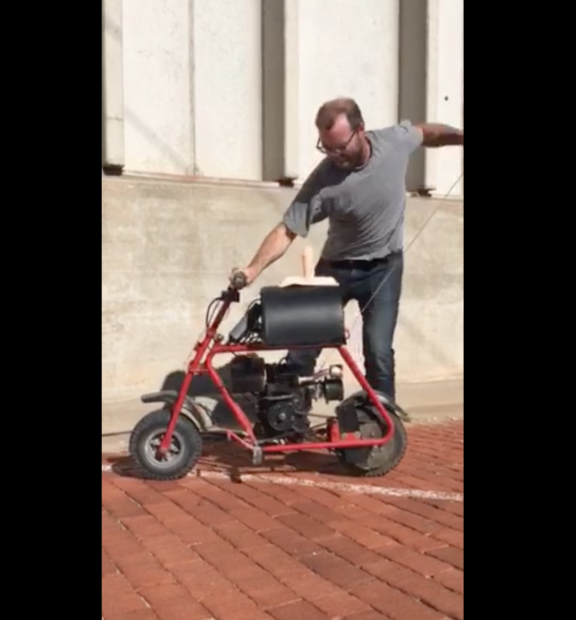 In what seems like the most straightforward acknowledgment of the Motorbunny’s aggressive nature, the Lubbock-based artists Jonathan Whitfill and S. Harrison Brooks have collaborated on a modification that turns the machine into a working mini-bike. Called Crank Shaft, this tough little fucker sports not one or two, but now three thudding motors. I think almost anyone watching the video of it all fired up and ready to take off (whether you’re male or female) can only imagine how… bracing the experience of this ride would be. A thrilling and terrifying thought. It’s a cool object now. You could ride it straight to the Emergency Room, since that’s probably where you’d be headed anyway.

🙂 I remember Jeff Gibbons and JMB talking a bit about this project when I visited their studio and I regret not asking about trying it. I hope some, if not all, of the artists did.

The only thing dull about this wonderfully droll essay is the title. The possibilities were so much — OK, obvious joke coming up – bigger than that.

Why use a machine if you have a loving hubby at home :)? Take that :p!