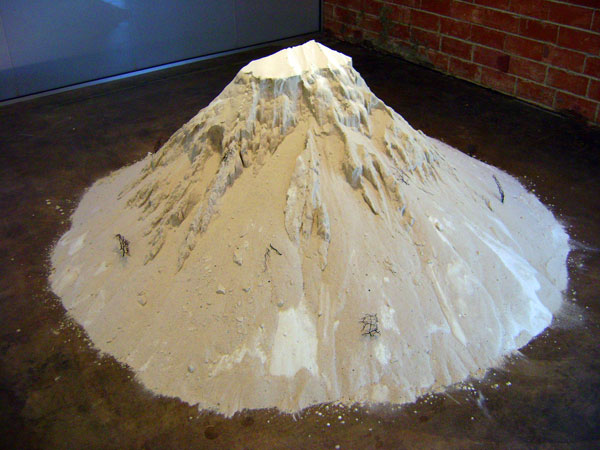 Celia Eberle: The End of Things

(Typed notes for this part because I took so many notes that complete sentences would make this review inappropriately epic for a blog post.) 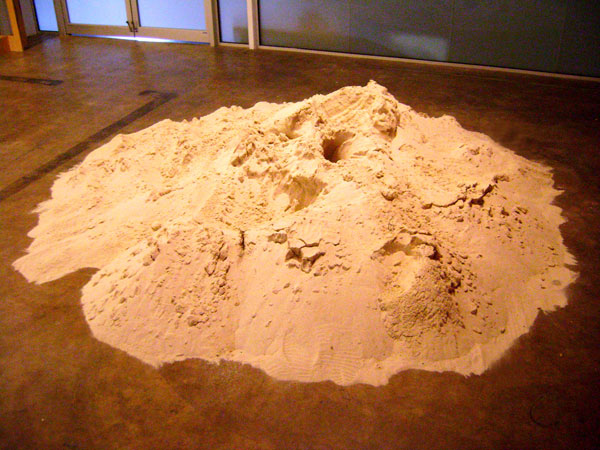 Can I touch this? No one would catch me. I want to flop into it. The hole at the center is deep and mysterious. Is this a sand castle? The beginning or end of one. How much is sculpted intentionally? Or accidentally. I’m now getting a Middle East vibe, a digging vibe (oil). Nice vibe with title (“Mine”). 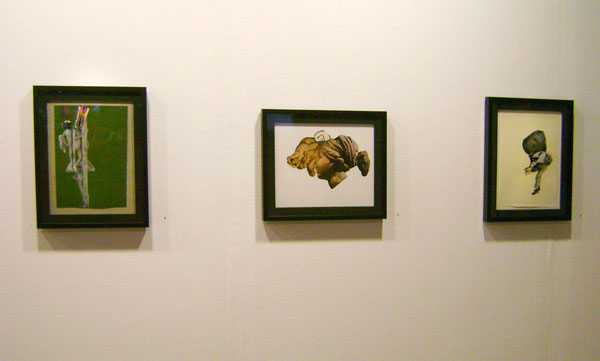 Back breaking. Laborer cut in half. Half a man. What is he carrying? History? Religion? Did he harvest something? Collage itself is careful, paper it’s on ripped from larger piece at bottom. 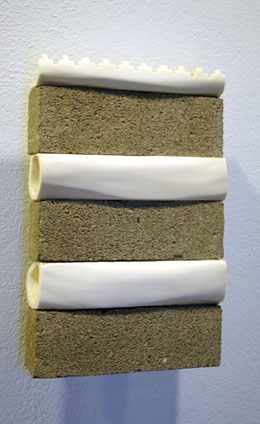 Would like this mounted farther out to see sides, top easier (it’s maybe 3 inches out now). Stone bricks stacked with alternating bone. Bones hollow. Top is maybe 1/3 of a bone with chess-piece-like design across top. Primitive. Building but not building. Building with bones. They seem like human bones though probably too big. 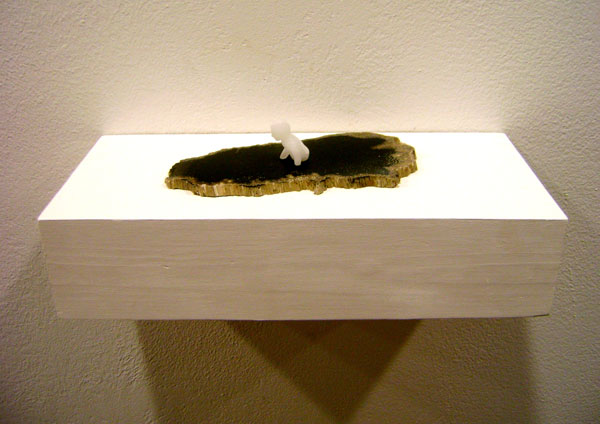 Man drowning. Or child in pond. Definitely seems like an organic body of water – black surface, speckled edges, organic shape, raised from display shelf – human figure looks ghostly + unnatural there, leaning forward with hands unseen/submerged, only torso showing. Stabilizing so as not to go under? Or rising to stand and remove himself? Suggests a male but ambiguous. 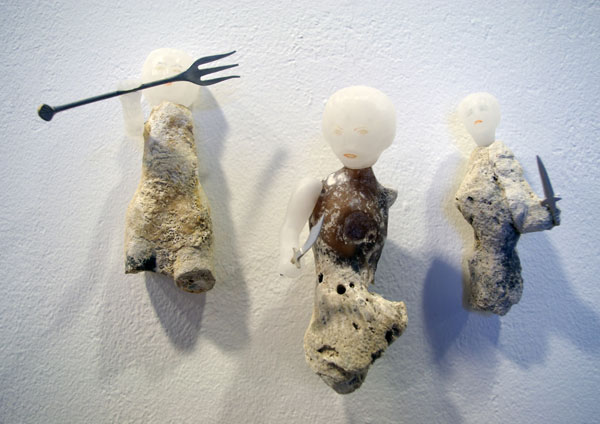 Definitely women. Painted faces. Appear unnatural, but rock bodies make them MORE nature than human. All hold knives (1 holds pitchfork). They are pretty. Hair + lipstick suggest 1950s – also that they’re pissed off. Curvy – 1 has hips, 1 a nice rack, 1 a Barbie perfect figure but a hole where her heart should be. FAVORITE. 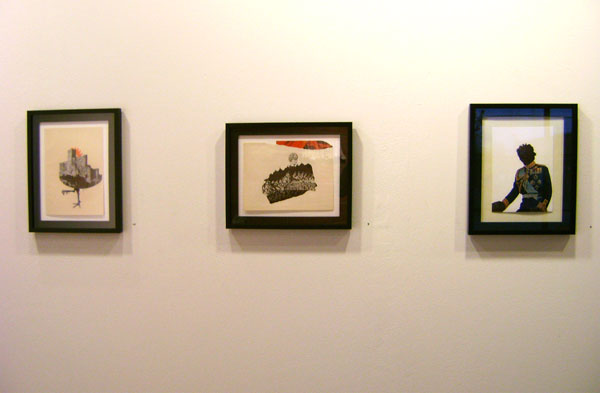 Celia Eberle, Defend Us from Tomorrow, Under Bub, Endless Hand (lt. to rt.), 2011. Courtesy of Plush Gallery and Meredith Eberle.

A sovereign with Wookie fur for hands + head. 1 small eye, no other distinguishing features.

ALL COLLAGES ARE UNCLUTTERED. NONE ARE DEAD CENTER IN COMPOSITION. FRAMED LIKE PHOTOGRAPHY.

Cherubic head looking down on…

A mound of blue bodies – still young and supple, but dead

Ancient ruin with small cross (you could overlook) in black and white. Cartoon blue chicken legs laying an egg of some kind of structure. Cartoon orange sun with eye peering behind tower. 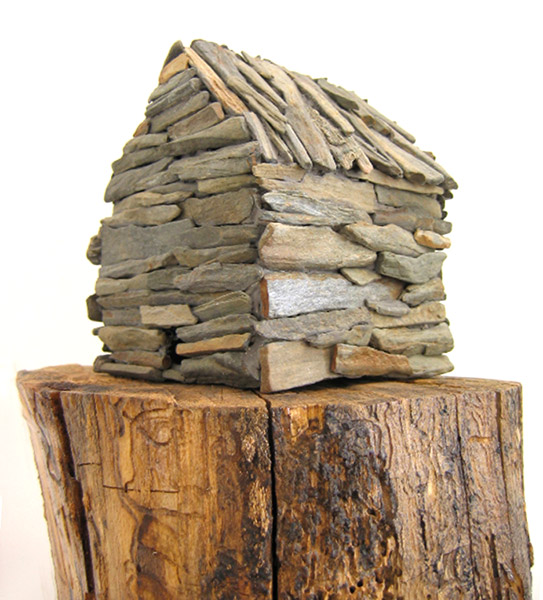 Cabin of long stones, no door or window but so beautiful to look at – rhythmic, cozy. (The audio loop wasn’t running when I was there.) 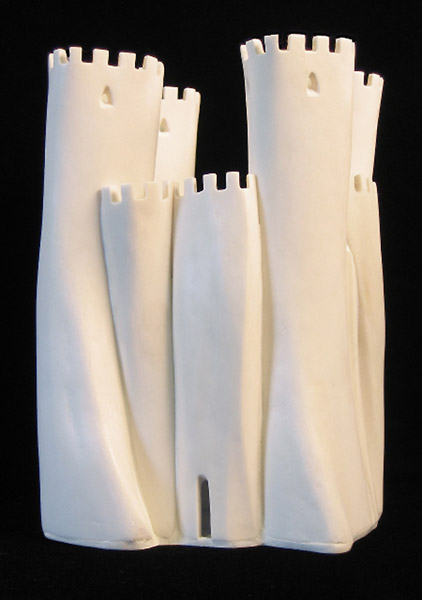 Echoes religious purity of #11, but this is a castle. 1 small door. Bone-like. Swaying and rounded. 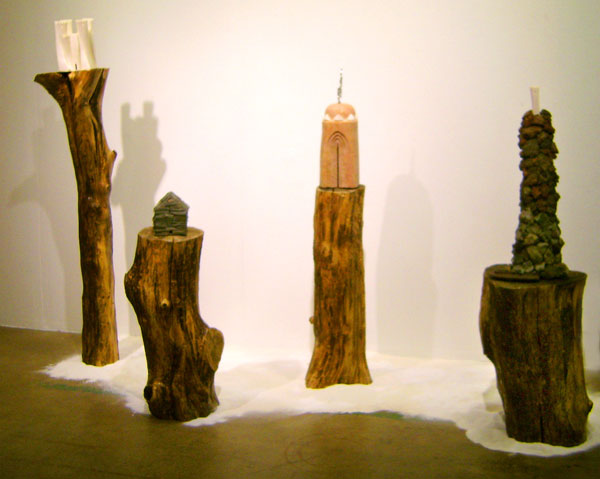 11 – 14.  FAVORITE. Building homes on high – 4 tree stumps, different heights. ALL PROTECTIVE. ALL REVERENT. Different ways of expressing beauty. Why are the outsides – which are all the outsider eyes can access – so beautiful when designed to keep others away?  Architecture + the building as SETTING APART  not just physically in space, but a setting apart as IDENTITY. A surrogate. I appear to you as this building because you cannot see the me within it. I am beautiful to your eye. I am holy to your eye. I am higher than your eye. I am safe from your eye. 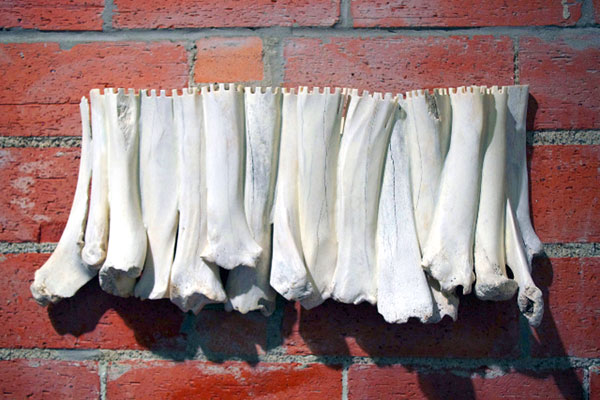 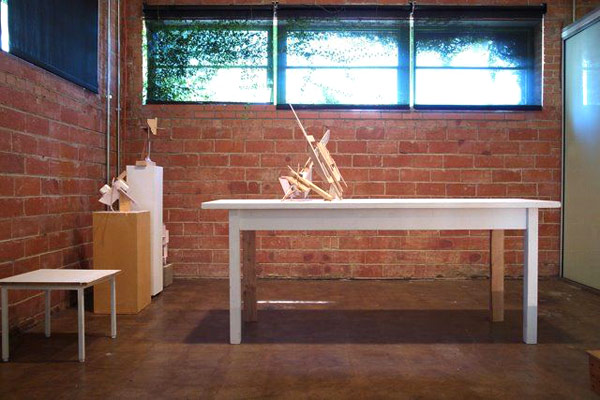 Michael Mazurek: Not to Scale, Subject to Change

This show has the feel of an industrial laboratory, spare and silent, full of verticals, shapes, masculinity, and toughness. Mazurek uses inexpensive materials and found objects to make architecturally-inspired structures, many of which require crouching near the floor to see details. Using scraps that look fragile – transparent plastics, lumber, white Styrofoam – but are mostly indestructible, he builds mock-ups of complex structures with irregular pieces bound by exposed nails and masking tape. The effect is of a gifted but irredeemable child receiving model airplane assembly kits for Christmas, chucking all the step-by-step instructions, then going on a frenzied tear to create his own mad world. 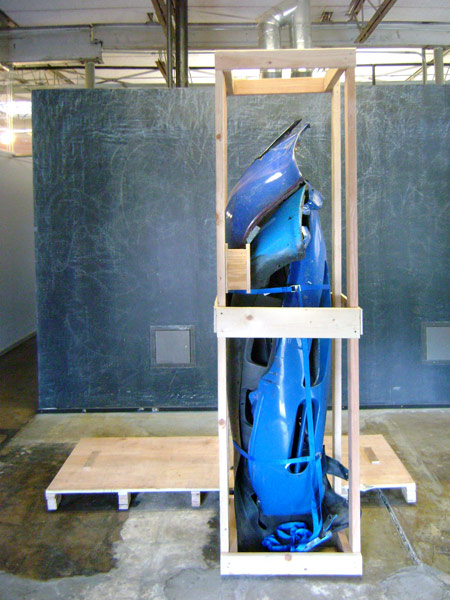 I could not help but think how cool these works would be if they were closer to the size of real buildings, and given the exhibition title, I have to wonder if the artist is thinking that too. One of the best pieces is also one of the largest – a big blue weird John Chamberlain deal called Sculpture that looks like it was once alive or is sleeping in a vertical cradle. Another, Corner Relief, is outside at the corner of the building (duh), where Mazurek is unconstrained by walls and a ceiling. 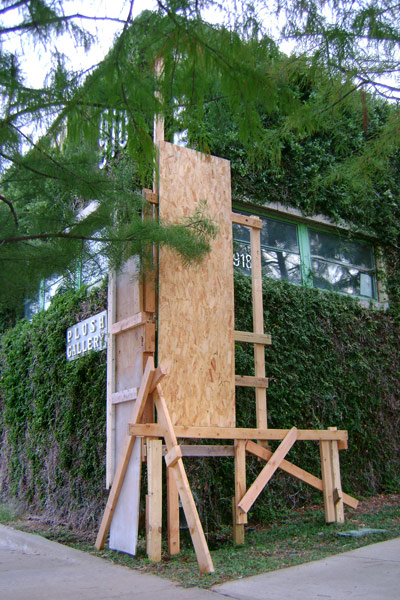 As a new M.F.A. out of the University of Texas at Arlington, he is at the beginning of a career limited by affordable materials and realistic exhibition space, but it should be exciting to watch his weird world grow up.

Both shows run through October 8th at Plush Gallery in Dallas. Knock on the door and either Randall Garrett or an architect will let you in the building.