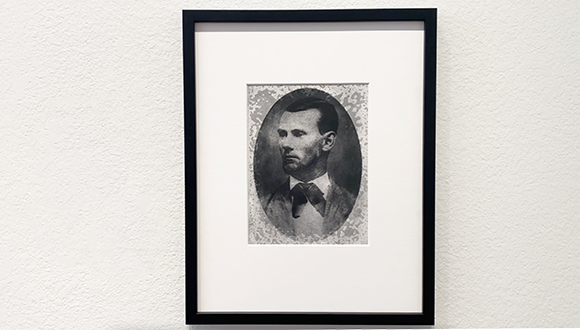 “Art and history collide in an exciting and engaging exhibition this summer at Jody Klotz Fine Art. The gallery will have two series of etchings by the prolific Dallas-based artist Colette Copeland from her project entitled My Jesse James Adventure.

My fascination with Jesse James stems from childhood family lore — tales of our blood kinship to the notorious outlaw Jesse James. While some girls bragged of their pedigreed ancestral lineage to the Daughters of the American Revolution, I could usually bring conversations to a stuttering halt when announcing my consanguinity to the daring outlaw.

My great-great-grandmother Sarah Louella Prevette McCracken’s second husband was a first cousin of Jesse James. William Henry James a.k.a. Billy (father named Cyrus) and Louella were married for nine years. My great-great-grandmother didn’t like the business dealings and comings/goings of the James’ clan and divorced Mr. James in 1887 due to lack of support for her and her son Thomas Leslie James (my maternal grandmother’s father). Mary Beulah McCracken (my great-grandmother) married Thomas Leslie James (her stepbrother), thus continuing the James lineage. This sounds like a Shakespeare comedy or tragedy, depending on your perspective. But at least she didn’t marry her first cousin, which was quite common for the time.

While I knew that My Jesse James Adventure would involve another performative journey — one that spanned many days and miles, for he was quite a prolific outlaw — my quest went beyond the personal connection of a namesake or literary heritage to examine issues of fake news, gun violence and criminal celebrity stardom. The project addresses the cultural mythos of criminals, specifically how the icon Jesse James was/is presented and commodified in books, films, comics and historical sites, as well as the current and problematic fascination with DNA networks such as DNA.com.

Over three summers, I traveled to the sites where Jesse James lived and outlawed, filming and leaving my DNA in the form of a lock of hair at each site. The performative journey/quest spanned nine states and over 4000 miles.

The exhibition includes a 22-channel video installation, which will be on display at the Old Jail Art Center from June 4th to August 20th. Jody Klotz Fine Art will host an exhibit of limited edition solar plate etchings, and chine collé prints, as well as an original musical score composed by Dallin B. Peacock, inspired by spaghetti westerns, specifically the music of Ennio Morricone. In addition, visitors may use their phones to scan a QR code that will activate an original audio guide featuring acclaimed Dallas actor Ike Duncan, who narrates excerpts from historical newspaper accounts of the James Gang robberies.”