In her third solo exhibition, Feels Like Forever: new paintings, at the Barry Whistler Gallery, Kirsten Macy’s paintings round a corner from her previous brighter, more sensual body of work toward serene, wide open landscapes, yet maintain her signature minimal style. 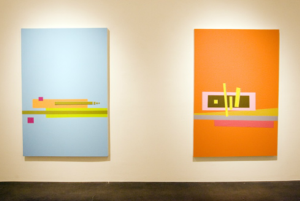 In the past she has produced blocky paintings in bright colors. Digital vs. Analog, (2005) with the Oh 6 Collective (now defunct) was humorous and almost cartoonish. In a 2008 CentralTrak installation, A Girl Named Ham & the Sportsman Royal, she painted the interior of a Sportsman Royal van pink and wired it for sound.

These past works seem more concerned with the urban chaos in which she lives. Her new paintings are their antithesis. They are meditative conversations, remarks on the afterlife, a thought on what is beyond the now. Abandoning the reds, oranges, and yellows that dominated her work before, Feels Like Forever uses a spectrum of soft grays and purples to direct the viewer toward her exploration of an amorphous shape—an explosion of white in the foreground of a majority of the paintings. 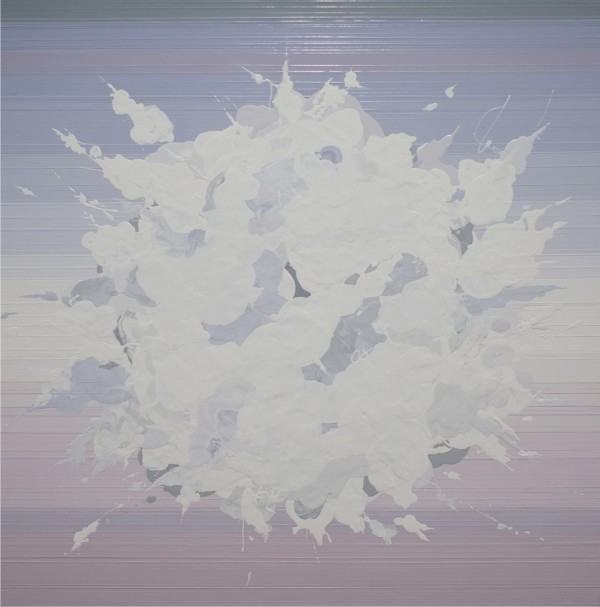 Her backgrounds are minimalist—clean horizon lines and subtle colors focus attention on these explosions, reducing the paintings’ content to the bare minimum. Macy’s new paintings are about reducing form to its utmost simplicity: flat surface color and simple finishes. The explosion image set in an abstracted, simplified landscape highlights the tension between emptiness and mass.

The paintings are constructed within an organized set of rules; her backgrounds meticulously layer shades of gray and purple. An amount of chance is allowed to seep through her tight control in the dripped paint of the explosions, allowing for a delicate dance between organic and hard edge forms.

Dead Men Stand in Line places the explosion front and center, focusing the viewer’s attention on its stature and personality. It demands that you look at it, at its organic shape, and forget the background, which is comprised of straight lines and hard edges. The application of paint is sensuous and complex, an object and yet, still, an event. All we can see is the explosion. 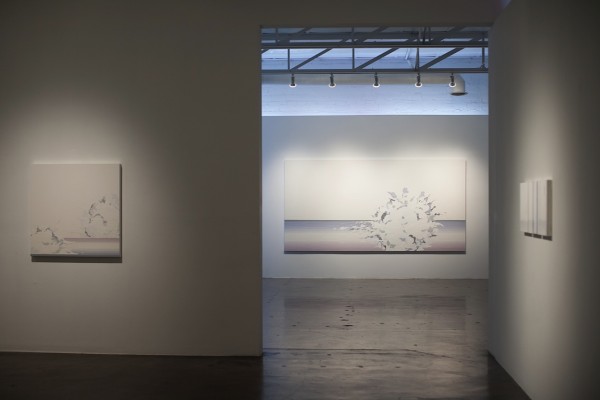 In My Beginning Is My End, a 6’x12’ painting, pulls back from the detailed study of the explosion in Dead Men… and shows us the moment the bomb is detonating. 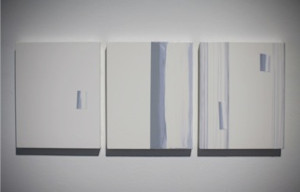 Changing pace, Nobody Moves Nobody Gets Hurt focuses on negative space. Thick, sweeping vertical brushstrokes are reminiscent of road lines, or cars that seem to be moving through traffic patterns—an image that became even more significant when I found out that this body of work was produced after Macy was struck by a car, an accident that left her near death. During her slow recovery, which she equated to living in a fog, she had to relearn simple daily acts. Now, the color choices make sense, as does the appearance of the impact, as a cloud of white.

It also explains the series of four small canvases opposite Dead Men Stand in Line. At first view, they seem out of place because they are harder and more angular than the rest of the show. Perhaps they stand as the final mark of time’s effect—all color eventually runs out; all curves, at the end, are straightened; and all explosions have grown silent.

Kirsten Macy: Feels Like Forever is on view at Barry Whistler Gallery through July 13.

Danielle Georgiou is a video performance artist based in Dallas, TX. She is currently working on her Ph.D. in Aesthetic Studies at the University of Texas at Dallas.

WE DID VISIT TONIGHT. CONGRATULATIONS ON YOUR SHOWINGS
AND ON YOUR ACCOMPLISHMENTS. LOTS AND LOTS OF HARD WORK.
BLESS YOU. MIKE AND PAT.