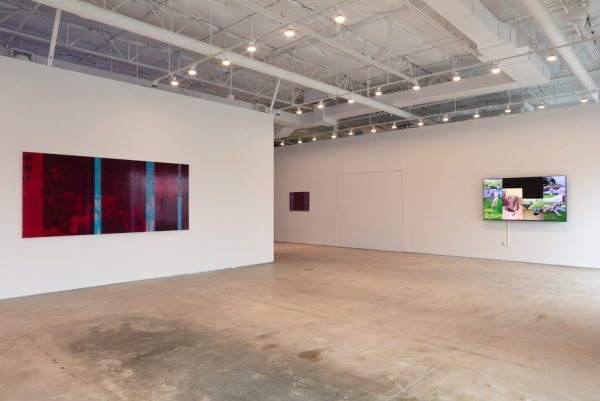 I first encountered the work of Belgian artist Emmanuel Van der Auwera at the Dallas Art Fair in 2016 in Harlan Levey’s booth, where I’d enjoyed long discussions with Levey about the works of TR Ericsson and Marcin Dudek a year before. At the time, Levey presented two pieces from Van der Auwera’s respective Memento and VideoSculpture series. Both relayed a strong synthesis of material, aesthetic and ethical inquiries. These were at once warning tales and commemorations, beautiful and eerie reflections on the mediatized world. The haunting VideoSculpture in Levey’s booth was eventually acquired by the Dallas Museum of Art.

Curious about the new Dallas space 214 Projects (an extension of the Dallas Art Fair) and what I’d see in White Noise, Van der Auwera’s first solo exhibition in the United States, I sat in on a packed artist talk moderated by artist Lucia Simek. Van der Auwera is a hyper-smart and articulate person. The works in this exhibition unfold the complexities of a system we presuppose as political without being aware of the subtle contrivances in which we participate. Simek helped navigate the layers of cognitive and systemic programming addressed in this work, using examples to illustrate how Van der Auwera teases out awareness of emotional impulses, complicit actors, and hidden observers. The work asks the audience to bear witness by aligning ourselves with the means of production and acknowledging the media as colluding in our blind consumption of content. 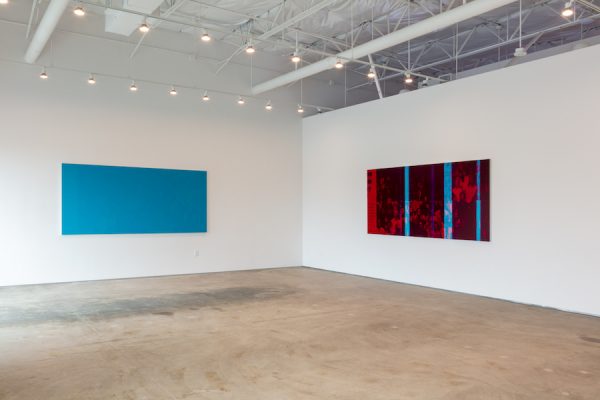 Upon entering the space, you’re confronted with the same image twice, one blue and one red: a flag of political trauma enlarged from a newspaper. Memento (Farewell, Blue) is made from a grid of aluminum printing plates used in newspaper production. Van der Auwera’s process coopts the machinery of news dissemination, disrupting it to call into question the motivations of the press. In this case, a seemingly neutral image of a somber-faced crowd attending Obama’s farewell address directs the observer in how to remember this transition of power: not as a fond farewell, but as a tragedy. By not focusing on Obama or smiling faces, but rather on a solemn crowd, the image generates an emotional kinship of grief, the archetype of the tragedy image typically displayed after a terrorist attack. 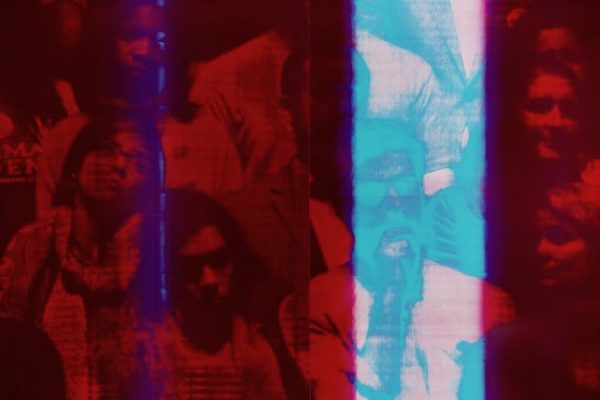 Perhaps more problematic than a newspaper’s propagandizing is the awareness that those being photographed are enacting their role as the suffering proxy for the gaze of the camera. We are trained to manifest the socially expected grief commensurate with the context of the moment. As such, each attendee becomes an actor reflecting what society expects, reducing the chance of authenticity in the moment while simultaneously enhancing the strength of the image. (“Strength” in this case refers to the image’s ability to proliferate and represent a specific narrative, which is contradictorily tied to its “weakness.” The image must seem universal at some level, which is to say unoriginal and democratically accepted — much like the people who populate the photo.)

The choice of Obama’s farewell address crowd, a somewhat banal image, presents itself as a means to access and remember the moment. Van der Auwera reflects that an image is necessary to remember trauma: we desire a single curated image to become the touchstone from which we can align our grief and develop memory. Such tragedy images are constructed socially and democratically, raised to the level of a cultural icon, and tend to obliterate facts through emotional resonance. This tendency to champion a “curated reality” embodies the hyper-normalization — or post-history or post-truth era — of the Real as manufactured through manipulation of desire (to borrow concepts from Adam Curtis, Vilém Flusser, and Deleuze/Guattari). In such cases fantasy becomes a very real means of production, in not allowing the image to operate as documentation, but expanding its function as an expansion of consensus opinion. 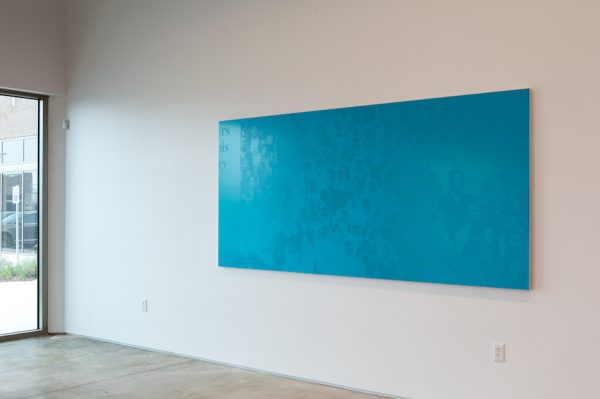 Van der Auwera works against this casual acceptance, forcing the viewer to work for content rather than quickly absorbing the image with its embedded cultural and human triggers. A co-opted newspaper printing technique (an emulsion on affixed sensitized aluminum plates) creates Van der Auwera’s flattened blue color-field which only activates the image through reflected light. We must shift our position and perspective to investigate portions of the image, allowing the abstraction to reveal figuration and deliver context. As a by-product of this complex surface, the images fail to make good Instagram fodder, re-enforcing the need for a personal encounter with Van der Auwera’s physical work. This thwarting of our desire for easy image assimilation and digitized re-posting considers the broader framework in which we live, where habits of rapid engagement and “social activity” replace criticality. 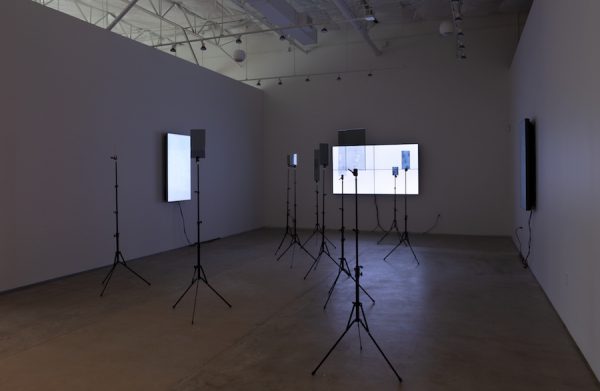 Deploying a similar initial strategy, Video Sculpture XX (The World’s 6th Sense) takes the form of white color-fields with several blank monitors where the information has yet to be decoded for human eyes. This nuevo-Malevich, high-modernist reduction of image into weak universal symbol posits the vacancy of image as precursor to insight. As we align ourselves with the tripod figures throughout the space, polarized lenses reveal video playing on screen. Moving through the space, the decoded views show us the Eiffel tower, a crater on the moon, and tourists wearing cargo shorts. Captured from a single point in Las Vegas, the surveillance fragments divulge a version of digital Panopticon for unaware citizens. 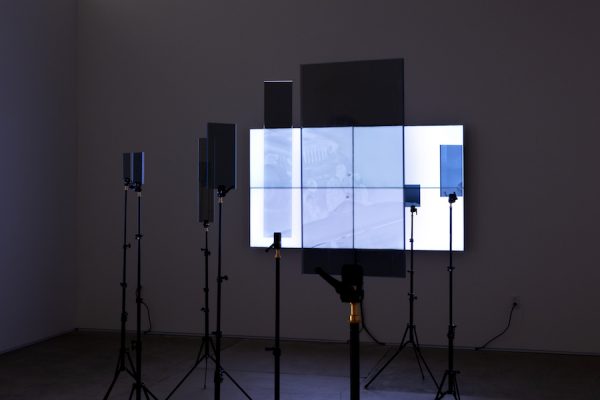 This found footage of military-grade equipment has a spasmodic quality of zooming and panning, documenting the capabilities of the equipment’s phenomenal resolution and tracking. Clearly not made for human consumption, this footage is generated for AI processing and testing. So, when we parse information through the variety of lenses we become aware of our inability to synthesize all the information or harmonize ourselves to the technology, granting the camera and associated AI an uncomfortable dominance and otherness. As the subject of the device’s gaze, we are casually stripped of agency or rights, captive to expanding technology and self-policing.

As a byproduct of military testing and spending, this type of technology and our role in its lens expands on the evolution of military tactics and social consensus. Since the Vietnam War’s insistence on the “image of success” rather than actual success, there has emerged a trend to valorize war campaigns and minimize dissent through personal-interest stories of the soldier. Considering this trend’s evolution towards constructed output on social media, Van der Auwera’s Home offers a compilation of 500 videos of soldiers welcomed home by their dogs. 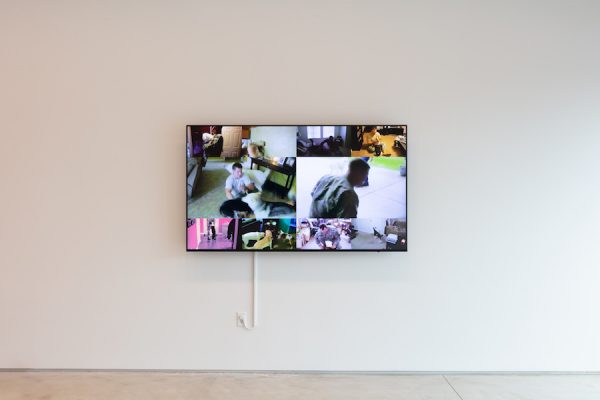 The boisterous emotional impact of Home and its lack of disruption or obfuscation is at odds with the rest of the exhibit. The straightforward presentation of found footage exposes the giddy reunion of warrior and loyal companion as simultaneously heart-warming and deliberately manufactured. Showcasing the mythic male’s return as loved protector is primal. However, the sheer ubiquity of these videos posted online converts intimacy into expected meme: normalcy must be reinforced and socially shared. Once again, the subject becomes actor, with an awareness of the camera, and must dutifully perform the role. Unfortunately, these joyful moments, when viewed online, alleviate a portion of guilt and dissuade the consideration of long-term effects of war on veterans. When viewed in totality, the orchestrated repetition develops a corrupted sweetness — an effort to stave off worry at least for the moment.

These prescribed roles, enacted under the gaze of the camera wherein we as a society produce the images we want to see, speak to the power of “invisible, influencing machines.” In 1919 Victor Tausk, a contemporary of Freud, discussed patients whose actions were controlled by “influencing machines” that thwarted their desires, causing jouissance to recede. One hundred years ago these machines were envisioned as indecipherable cogs and batteries — but what would such mechanisms controlling our urges and behaviors look like today? And would we be aware of them, much less able to counteract them?

As Van der Auwera said in his talk, we are operating in an “economy of feeling” with little sense of responsibility when making the choice to believe images, but this economy has a machinery behind it. It is difficult to be a healthy person in a sick society, but perhaps if we take that notion a step further and consider that due to uncritical acceptance we have lost the tools to extricate ourselves or resist the image’s emotional machinations, the artist’s awareness grants them the role of the sanest person in the room.

“It is difficult to be a healthy person in a sick society, but perhaps if we take that notion a step further and consider that due to uncritical acceptance we have lost the tools to extricate ourselves or resist the image’s emotional machinations, the artist’s awareness grants them the role of the sanest person in the room. ”
Well done, one of the better arguments for the importance of the artist’s role today in our image saturated and obsessed culture. I thought of many portions of Thomas Lawson’s essay “Last Exit: Painting” while reading this; “The complexity of this situation demands a complex response. We are inundated with information, to the point where it becomes meaningless to us. We can shrug it off, make a joke, confess bewilderment. But our very liberty is at stake, and we are bamboozled into not paying attention.”