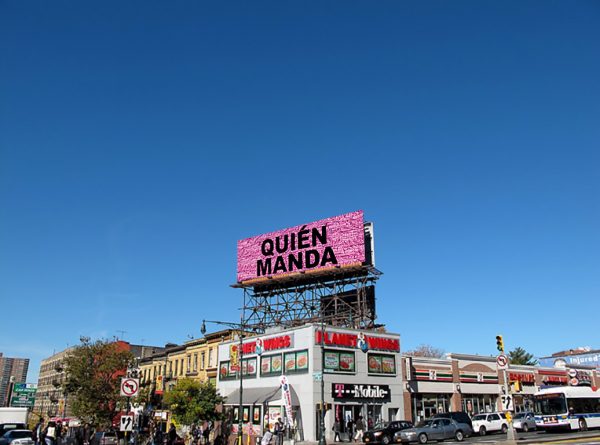 Last week, Dallas-based artist Giovanni Valderas debuted a new public artwork in the Bronx, New York. Part of the project 14X48, which repurposes vacant billboards as public art spaces, the piece draws visual cues from Valderas’ signs and sculptures resembling brightly colored piñatas, which he has shown throughout Texas. Reading “QUIÉN MANDA,” a Spanish term meaning “Who rules?,” the billboard is part of the artist’s ongoing project of the same name, for which he printed and placed 100 yard signs throughout Latinx neighborhoods in Texas. Meant to resemble political campaign advertisements, those pieces “aimed to comment on and impact traditionally low voter turnout in Latinx communities” in a time where political issues impacting these communities are rife.

Having his art displayed to the public on a billboard makes sense for Valderas, as he sometimes installs his works guerilla-style in public spaces in order to reach communities that might otherwise not see his message. Many times, these works live out their lives in situ, gradually degrading as their tissue-paper covering wears away.

Valderas stated to Glasstire about the project:

“I’m thankful that 14×48.org has given me the opportunity to further create dialogue outside of Dallas. It’s my hope that this project will pose a emboldened question of agency.”

14X48 isn’t the only organization capitalizing on available billboard space to show art. Recently, For Freedoms announced The 50 State Initiative, a new project placing politically inspired art billboards in every state across America. Project Row Houses has also worked with For Freedoms, displaying one of its billboards in a site on Emancipation Avenue in Houston. In 2014, more billboard art came to Texas when LAND (Los Angeles Nomadic Division) presented a billboard artwork by Eve Fowler. And in downtown Houston, the Art Blocks project gave artists opportunities to present a billboard-sized work for its Main Street Marquee series.

For more on Valderas and his art, see below:

Look at all those links under this exciting news. Go, Giovanni!