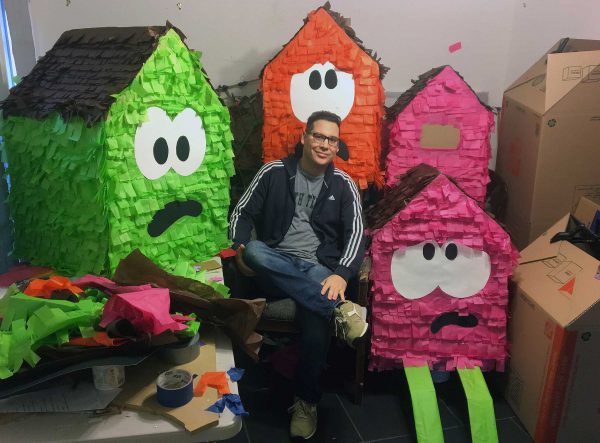 Today, the Meadows Museum at SMU announced that Dallas-based artist Giovanni Valderas is the winner of its 2017 Moss/Chumley Award. The jury for the award included Shelley DeMaria, curatorial assistant for the Meadows Museum; David Leggett, director of development for TACA; Leigh Arnold, assistant curator at the Nasher Sculpture Center; Joan Davidow, co-director of SITE131 and director emerita of the Dallas Contemporary; Sedrick Huckaby, assistant professor of painting at University of Texas at Arlington and 2016 Moss/Chumley recipient; and Christina Rees, editor-in-chief of Glasstire.

Given annually to a North Texas artist, stipulations for the award include that the winner “has exhibited professionally for at least ten years and has established a proven track record as a community advocate for the visual arts.” Many of Valderas’ recent projects have addressed local Dallas issues, including his Casita Tristes guerrilla installations that popped up a few months ago around Oak Cliff and his 2016 exhibition Forged Utopia at the site of the now McKinney Avenue Contemporary. Some of the jurors for the Moss/Chumley award spoke about how Valderas’ work has impacted various Dallas communities:

“Valderas’s unique personal aesthetic, combined with an underlying message that encourages cultural awareness, and his commitment to the local community make him the perfect recipient of this year’s Moss/Chumley Award. We are so pleased to be able to recognize his work with this award.”
– Shelley DeMaria

Valderas joins the ranks of other Moss/Chumley Award winners, including Sedrick Huckaby, Annette Lawrence, Christopher Blay, and Frances Bagley. In addition to the award’s $2500 cash prize, Valderas will have two of his works on view at the Meadows Museum throughout the month of April.