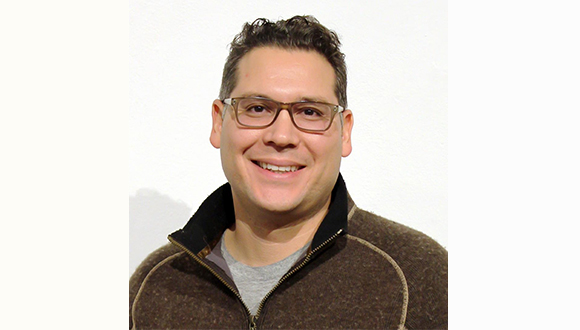 Giovanni Valderas has been named Exhibitions Manager for Fort Worth Community Arts Center (FWCAC). Valderas, an artist and MFA graduate of the University of North Texas, has served as an appointee by Dallas City Council as Vice-Chair of the Cultural Affairs Commission, and is active as an artist and activist in the DFW community.

The former Gallery Director at Kirk Hopper Fine Art in Dallas also ran for Dallas City Council to represent his Oak Cliff Dallas neighborhood. In 2017 Valderas received the Moss/Chumley Award from the Meadows Museum of Art at SMU, which is awarded to an “Outstanding North Texas artist who [has] exhibited professionally for at least ten years and who [has] a proven track record as an active community advocate for the visual arts.”
Reached by phone, Valderas had this to say: “I’m extremely excited to be part of the FWCAC family and I look forward to continuing on the strong foundation laid before me. While most institutions in the North Texas region often look for important culture [elsewhere], Fort Worth is doing something different; they’re cultivating their own culture.” He continued: “My role isn’t just about curating space but allowing the community to curate a space that is reflective of the issues and passions of the Fort Worth community, especially its most marginalized community members. We are here to democratize space.”
Valderas assumes the post after the departure of FWCAC’s former Exhibitions Manager, Jonathan Levy. Levy communicated via email: “I truly believe in the mission of the Arts Center to support local, contemporary arts. Throughout history,  art has served as the voice of the people and it has never been so important as today when there seems to be a shortage of human empathy. Art allows the viewer to walk in the shoes of the artist and can serve to open people’s eyes to unfamilar perspectives. While I do not know Giovani personally, I have heard many great things and I look forward to seeing what he does to forward the mission of FWCAC.”

Valderas will welcome the public to the FWCAC with the opening reception for an exhibition that includes works by some of  Fort Worth’s art collectives, as they “take over” the space, on Friday, December 6, from 6 – 9 p.m.
****
Located at 1300 Gendy Street, the Arts Center is part of the most architecturally significant museum districts in the United States. The striking modern Herbert Bayer building (with a later O’Neil Ford addition) opened to the public in 1954 as home to one of the most prestigious and oldest collecting organizations in the state of Texas, the Modern Art Museum of Fort Worth. When, in 2002, the Modern moved down the street, the Fort Worth Community Arts Center opened. The building has exhibited world-class art and supported the performing arts for more than half a century.
Valderas is a Dallas native, and former member of 500X gallery, and his work was featured in the 2013 Texas Biennial,  and New American Paintings Magazine, issue #108 and #132 and a billboard project in the Bronx. His exhibitions include Impossible Geometries: Curated works by Lauren Haynes at Field Projects in New York City, as well as numerous local and national exhibitions. Besides the Moss/Chumley Award, Valderas received a  microgrant from the Nasher Sculpture Center in Dallas for his guerrilla site-specific project with tiny houses constructed from pinata papers.
2 comments

Congratulations Giovani Valderas!! We are very proud of you. You are a great artist

Mr. G.
Wishing youthe best of luck in Ft. Worth.
Ft. Worth is a great family city that realy cares for the Arts and Culture..