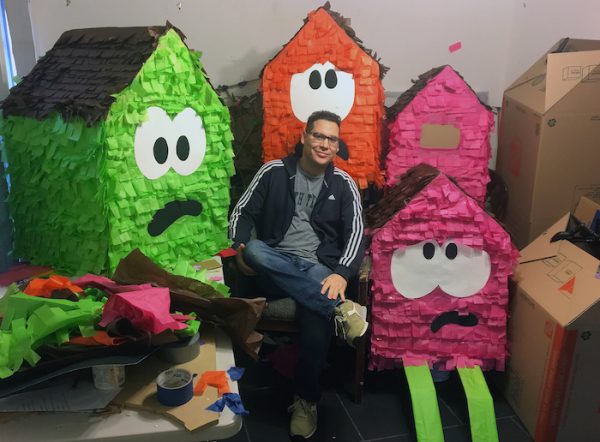 I first met artist Giovanni Valderas in Dallas in 2013 when were both members of 500X Gallery. One of the most interesting projects we worked on together was a collaborative video and sculptural installation with his students from Mountain View College and my students from Richland College. Although he was a newly minted MFA graduate, the Oak Cliff-based Valderas already had a strong conceptual foundation in examining themes of racial and social injustices in his work, as well as a singular experimental use of mixed-media and materials. For the past few years, his activist artwork has focused on spreading awareness about the lack of affordable housing and troubling gentrification in Dallas. The work has received a lot of press and media attention in the region, and has created an ongoing city-wide conversation about the issue. As a dedicated community advocate and artist, I can’t think of any other individual who is more deserving of the Moss/Chumley Award, an annual artist award through SMU that (increasingly) goes to artists who practice exceptional community advocacy.

Colette Copeland: Congratulations on receiving the well-deserved Moss/Chumley Award. I’m happy my prediction came true! Over the past few years, your work has evolved; your emphasis has shifted from an art-world audience to reaching a larger, community public audience. How has your approach to making work diversified with the development of the site-specific text works and the Casita Triste works?

Giovanni Valderas: I think I’ve become more conscious of my actions when creating work. I’m selective about the locations and how the public community will perceive the work. Most importantly, I’ve become a more informed citizen. Ironically, I spend more time going to community meetings and watching council meetings online than I do going to art openings and watching Art21. 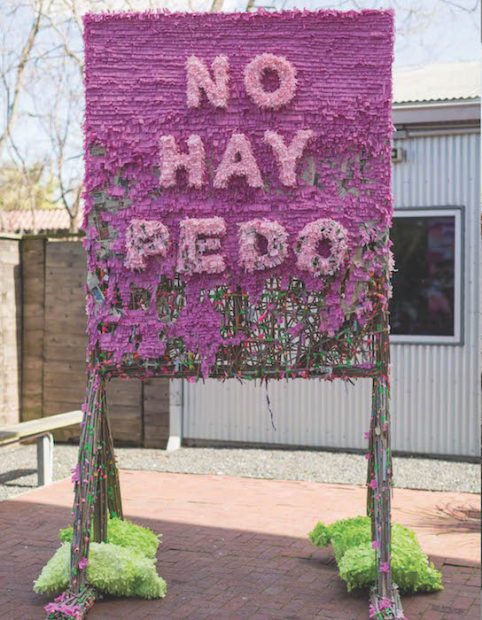 CC: Last week at the Nasher’s Theaster Gates Q&A, you asked him a question about when/if the successful artist becomes part of the gentrification problem. He responded with a question about what drives change in a community and the role of the symbolic gesture of art (i.e. piñatas in your work) to bring about awareness. Ultimately, he conceded that he might be a gentrifier today, but at the time of his death, many artists will reap the benefits of his real-estate purchases. His position is that protests, petitions and prayers are not enough. In order to stop gentrification, artists need to “buy the fucking buildings.” What is your response to that?

GV: Indeed, I believe we need stop falling victim to “progress” and make investments in ourselves, which means purchasing property and educating ourselves in civics. We need to learn how boards/commissions, zoning, and subsidies work. Informing ourselves positions us to be better citizens, but also empowers us. However, I can also see how daunting it is, especially when an artist doesn’t necessarily have the income to purchase property. By nature, artists are creative problem solvers. We figure shit out and do it well. 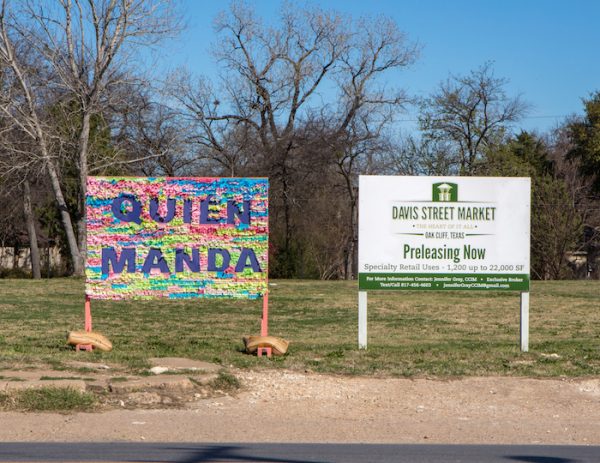 CC: Although you’re best known for your work in Dallas, you’ve also shown in New York and have an upcoming billboard project there. Can you speak briefly about that project and the ideas behind it?

GV: QUIÉN MANDA (Who Rules) is an extension of a project that I started in Dallas around the local municipal elections. With a micro-grant from the Nasher, I created one hundred 18 x 24-inch yard signs and dispersed them into my Latinx neighborhood. These signs mimicked political yard signs found during election season. Traditionally, Latinx areas suffer from low-voter turnout and so I wanted to create awareness and urge individuals to be engaged in the political system by placing the signs next to real candidates’ signage. I also specifically select the text in an effort to reach an audience not typically comfortable with art. The 18 x 48 project utilizes unused billboards in NYC. The signage that will be used will incorporate “QUIÉN MANDA” with bright fuchsia fringe as background. We chose the dates to coincide with the local run-off election in NYC. 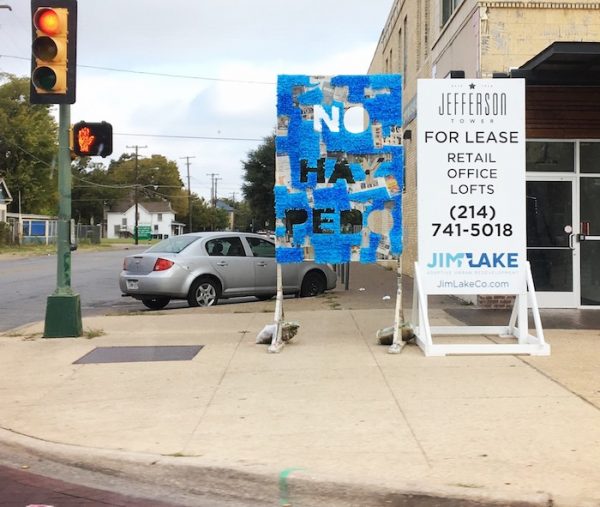 CC: True confession from a thesaurus nerd: According to Lord Google, juggling means to continuously toss in the air and catch, typically for the entertainment of others. Juggling also means to cope with by adroitly balancing: this is my heroic impression of you. So, how do you juggle the roles of assistant gallery director at Kirk Hopper Fine Art while making art — a lot of art — while also serving on numerous community committees, attending meetings, and doing the single-dad thing with three active kids?

GV: I think anyone who juggles life as an artist, parent, work, and community advocate knows it’s a challenge and honestly, things often get sacrificed for another. I used to try to combine my roles by having my kids work on my artwork with me, but they would quickly lose interest in cutting paper and gluing. What they want is my undivided attention. So I try to segment blocks of time where I’m wearing my “assistant director” hat, “studio time” hat, and “hanging out with my children” hat. Scheduling my calendar is key but it’s always a work in progress. 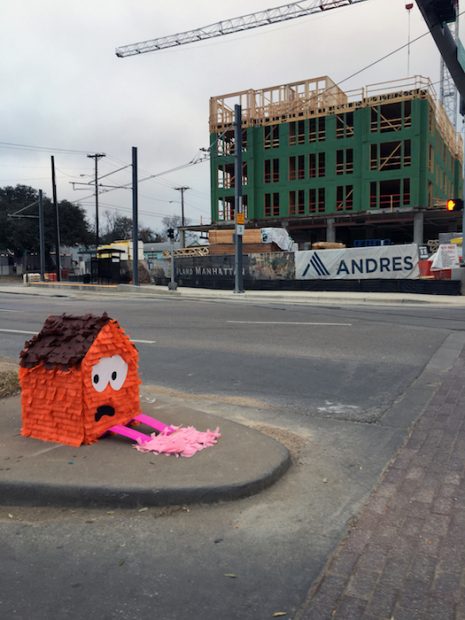 CC: Please share a story about people encountering your work in the public venue. What happens to the Casitas Tristes? Maybe there is an obsessed kleptomaniac collector who steals them and has them crucified on a wall in his house. Because you know it would be a creepy corporate white guy who would do that.

GV: LOL! I hope there is corporate guy who is secretly crucifying these Casitas, which would be a whole other art project. Personally, the fortuitous encounters the Casitas have with the community are my favorite part. The Casitas go out into the world as these innocent playful objects and sometimes they are adopted, sometimes they wither, and sometimes their anthropomorphic features are transformed, as if hardened by weight of the world. Individuals have grabbed them and placed them on their porches, co-opted them by drawing angry faces on them, and once, I received an email that sounded like a ransom request. When the Casitas are left alone, when all the advocacy post cards have been taken (and hopefully mailed to City Hall), the colored fringe is drained of all pigments (due to sun bleaching) and the structure starts to collapse — that is the most satisfying and real beauty of the work. This object that brought so much attention, admiration, and vitality is now a mound of cardboard and paper, forgotten and ignored. I think it’s indicative of what’s happening to our Latinx communities that are suffering from the negative impacts of gentrification.

Giovanni Valderas will give his Moss/Chumley Award Artist Talk this Thursday, April 26, at 6 PM at the Meadows Museum, SMU, Dallas. His talk is free and open to the public, but reservations are recommended due to limited seating. To reserve a spot, please call 214-768-8587.